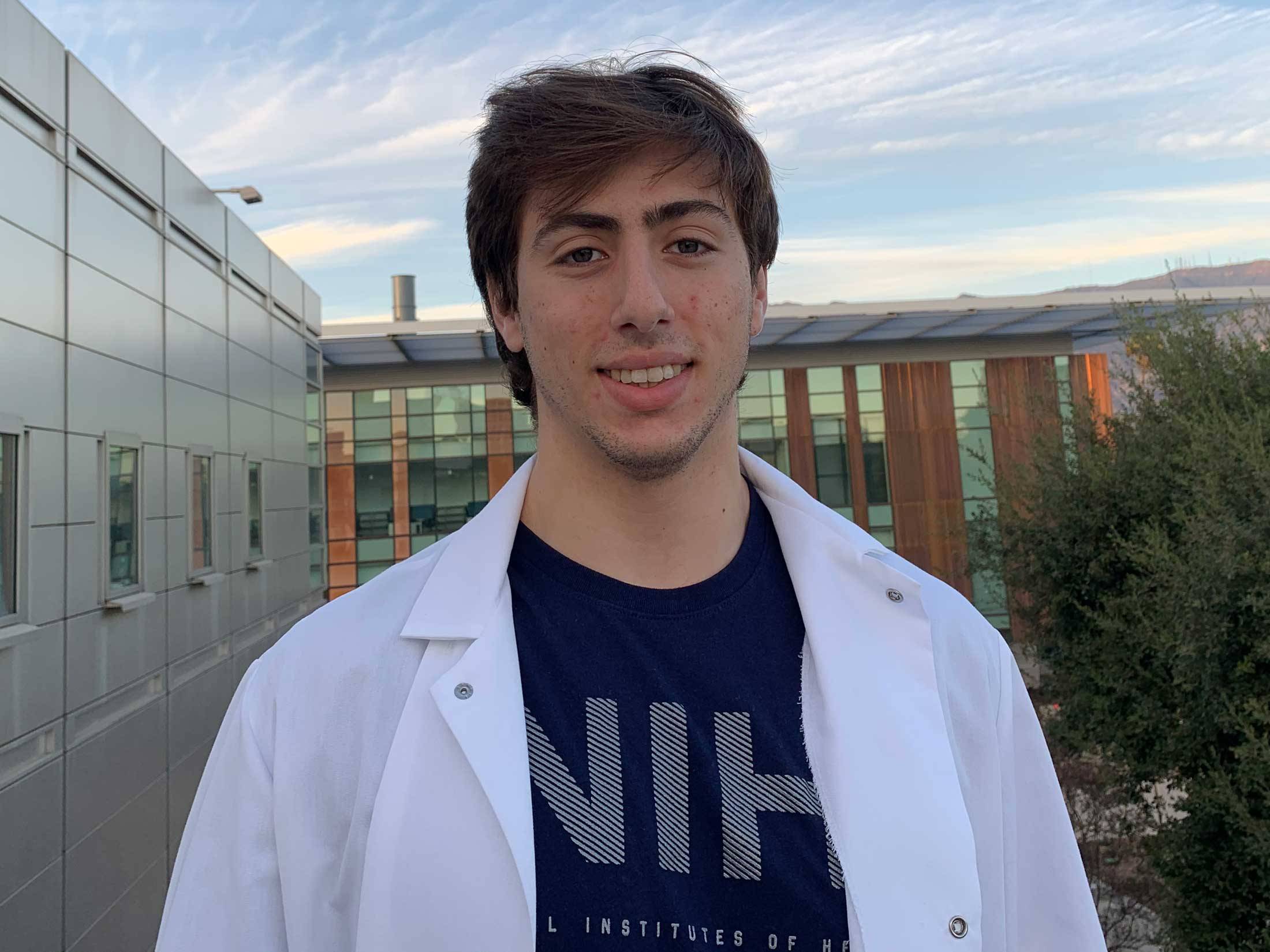 William Rosencrans ’19 wants to help develop a drug that will encourage a cell to take out its trash. “It needs a little bit of prompting to get it to clean up. It’s like a lazy teenager,” Rosencrans says.

Among the pieces of garbage that need to go are old mitochondria. The mitochondria provide power to cells, but — like leaky, spent batteries — damaged mitochondria can cause harm if they hang around too long. This harm may be linked to brain diseases such as Alzheimer’s and Parkinson’s disease.

Rosencrans is in the first year of a PhD program at Caltech, where he’s studying the cell’s powerhouses. But his life as a researcher started a few years earlier, powered by programs that sent him away from Colgate to spend time at major research institutions.

His first trip was to Asia in the summer of 2017, as part of Colgate’s newly launched exchange program with the National University of Singapore. Working with a biophysicist there named Johan van der Maarel, Rosencrans studied the way tight coils of DNA loosen so that their genetic instructions can be read.

“It went really, really well,” Rosencrans says. So well that in the years since, he’s continued to work with van der Maarel on analyzing the data from his few months in the lab, and those analyses have led to multiple published papers. The most recent came out this fall in Biophysical Journal.

In the fall of 2018, Rosencrans had another opportunity to do lab research outside of Colgate, through the university’s NIH study group program. He spent the semester in Bethesda, Md., working 30 hours a week in the laboratory of biophysicist Sergey Bezrukov.

With Bezrukov and staff scientist Tatiana Rostovtseva, Rosencrans studied the way energy moves out of mitochondria and into the rest of the cell. Mitochondria are like factories, and they manufacture energy in the form of molecules called ATP. Rosencrans was investigating a protein that acts as the factory’s loading door. Called a voltage-dependent anion channel, it sits in the mitochondrion’s outer membrane. ATP molecules must pass through the door to leave.

I think my mission as a scientist is not only to do work that excites me scientifically, but also to make sure that it actually has relevance for society in general.

Eager to continue with the progress he’d made in that research, Rosencrans went back to Bezrukov’s lab for a yearlong position after he graduated in 2019. That year at the NIH didn’t look quite like he expected — in the spring, the COVID-19 pandemic shut down his lab, along with everything else.

But Rosencrans found that taking time away from the lab helped him to slow down and collect his thoughts. “One of the silver linings was a lot of time to think about the science,” he says, and focus on the bigger picture. “And that really helped us when we got back into the lab.”

The big picture he was interested in involved a second protein called alpha-synuclein. It interacts with the channel protein in a complex way to regulate what can pass through. “This protein just closes the door on the factory, and prevents things from getting in and out,” Rosencrans says. Alpha-synuclein is also noteworthy because clumps of the protein show up in the brains of Parkinson’s patients.

Although Rosencrans is exploring a different cellular process in his PhD lab at Caltech, this research also has implications for brain disease. The process he’s studying is called mitophagy; it’s when the cell “eats,” or breaks down, old mitochondria. Rosencrans first became interested in the topic back at Colgate, where he worked with biology professor Engda Hagos to study the link between faulty mitophagy and certain cancers.

Research has shown that this cleanup process is also impaired in Parkinson’s patients. Problems with the mitochondria appear in other neurodegenerative diseases such as Alzheimer’s and ALS, too. Rosencrans hopes that his PhD research might be broadly relevant to one day creating drugs that prevent those illnesses.

Examining a cell’s inner workings one molecule at a time is fun science, Rosencrans says. But it’s important to him that the fun work translates into helping people. “I think my mission as a scientist is not only to do work that excites me scientifically, but also to make sure that it actually has relevance for society in general.”