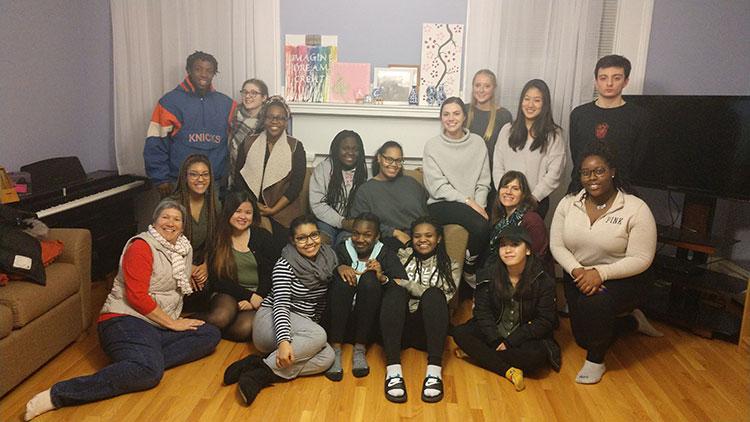 This semester, Colgate students gained resume-building skills as they learned to create digital stories — and, in turn, they helped create awareness for the local chapter of a nonprofit organization.

Students in the class Community Based Participatory Research made a series of short videos to promote the mission of the Fayetteville Manlius chapter of A Better Chance (ABC), an organization that opens educational doors for students of color. By giving youth access to quality high school education, ABC ultimately hopes to prepare them for leadership positions.

“To be able to give ABC scholars the tools to bring their motivation to the next level is very rewarding,” says Professor Janel Benson, who is an ABC board member and academic adviser.

In this sociology class, students work in partnership with a local community organization to carry out a research project that meets a community need. This semester’s class — supported by a grant from the Upstate Institute — sought to raise consciousness about ABC within the central New York community. Benson brought Sarah Kunze, who is instructional designer – Innovative Media and manager of the Digital Learning and Media Center, on board to co-teach the class.

In honor of the Fayetteville Manlius chapter turning 45 next year, the digital stories explain the history of the program, introduce the six local scholars, and show “a day in the life” of a scholar. Colgate students conducted on-camera interviews with the scholars, board members, support staff, donors, and alumnae, among others.

“To communicate effectively to your audience, you have to pay attention to all of the details, such as lighting, framing, getting the best audio, and syncing multiple camera and microphone clips,” says Kunze, who trained the students on all of the technical work, from pre- to post-production.

Benson added that, as an educator, it was exciting to be learning new skills alongside her students. “The students did an amazing job interviewing and getting the information we needed to create these videos,” she says. “Seeing the two worlds of Colgate and ABC coming together was so natural, beautiful, and inspiring.”

Coincidentally, ABC has other Colgate ties: Howard Jones ’39 is one of the founders of the national program, and Peter Farnsworth ’92 has been instrumental in helping to fund the Fayetteville-Manlius chapter through his charity, TopSpin.

For Benson’s sociology students, they fully committed to the project because they knew they were doing something that matters, Benson explained.

“Taking a class that was focused on using resources to help a program that directly changes young girls’ lives was something I felt I had to be a part of,” Julia Blackwell ’20 says. “It has been an amazing opportunity to take this course and get to know FM-ABC.”