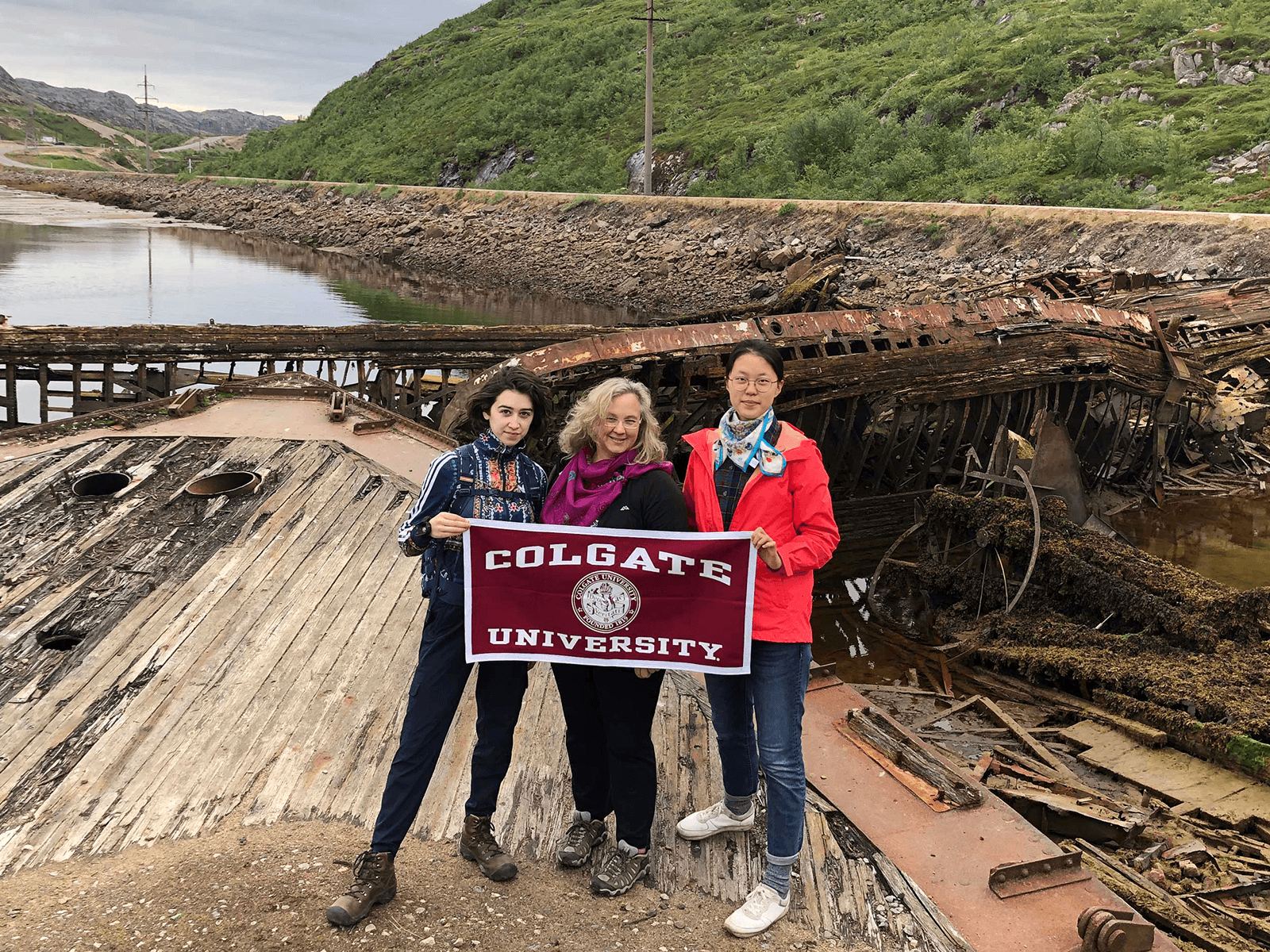 It is a three-day journey from Hamilton, N.Y., to Teriberka, Russia, on the Barents Sea. Jessica Graybill, associate professor of geography and Russian and Eurasian studies, made the trek last July with student interns Yang Zhang ’21 and Isobel Hooker ’21, checking in for a week’s stay at one of the village’s first Airbnbs.

Their goal: to create a website that allows viewers to navigate Teriberka (pop. 700) via 360° images, explore its history, and understand the uniquely situated town a little more holistically.

“Digital storytelling is being able, in this fast-paced digital era, to pull together a short, succinct story about a place, phenomenon, or person that can help explain something important in an academically informed, rigorous way,” Graybill explained.

In preparation, Zhang and Hooker spent five weeks at Colgate during the summer working with Sarah Kunze, instructional designer for innovative media in the IT department. Crucially, they learned how to operate a 360-degree camera, Photoshop the tripod out of images, and display information using websites Seekbeak and Roundme. For practice, they created a digital storytelling project for the nearby town of Earlville, N.Y., while researching Teriberka.

For her part, Graybill has studied the Russian Arctic for years and wanted to help her students create a digital story for this isolated town.

Teriberka now receives thousands of tourists each summer as the only town on Russia’s arctic coastline to have demilitarized to accommodate offshore oil and gas extraction. The resulting infrastructure development has changed the town’s human and environmental landscapes. Despite sanctions that put a hold on oil development in 2012, the town has remained open and locals have been forced to adapt.

Graybill, Zhang, and Hooker joined the global tourists and Russians who flocked to Teriberka to view the northern lights and partake in the fifth annual Arctic Festival. They lived off of deep-frozen reindeer, moss chips, and food from the town’s singular restaurant. The trio attended guided tours, spoke with locals, and took many pictures.

“It’s not exactly a bustling metropolis so there weren’t tons of people walking past, but if we were setting up the tripod in the middle of an intersection, some people sitting on their porch or some old babushkas would be very interested in what we were doing,” Hooker said. “They were so receptive and would say ‘It’s so nice to see so much interest in our little town.’”

As the producers of the story experience, Zhang and Hooker created a narrative arc about Teriberka, but viewers can choose how they explore and interpret it.

The website takes viewers through the decaying village, bathed in eerie blue light, with rotting boats along the shoreline. Voiceover narration elaborates on the livelihoods of the inhabitants and the new role of tourism. Viewers can digitally move through the space, stopping to explore bubbles filled with additional photos or informational blurbs.

“People might naturally explore in different orders and combinations and could potentially see all the same things and walk away with different interpretations of the story they heard,” Hooker said.

For Zhang, the research allowed her to see the adaptability of human life.

“I have a certain way of life, and I always thought that it was intuitive,” she said. “But the interesting part of human geography is that you get to see how these types of small towns and people are shaped by the infrastructure available to them.”

Graybill hopes this exploration of Teriberka will allow them to provide information to potential tourists that is based on thoughtful research and the inhabitants’ lived realities.

“Digital storytelling blurs the divide between consuming information and producing it. The more we can understand how to cross those divides and how to consume knowledgeably, the better we are all going to be in this world as it continues to digitize itself,” Graybill said.

Graybill, Zhang, and Hooker hope to expand the project to have a Russian voiceover and potentially be accessible through a virtual reality headset.