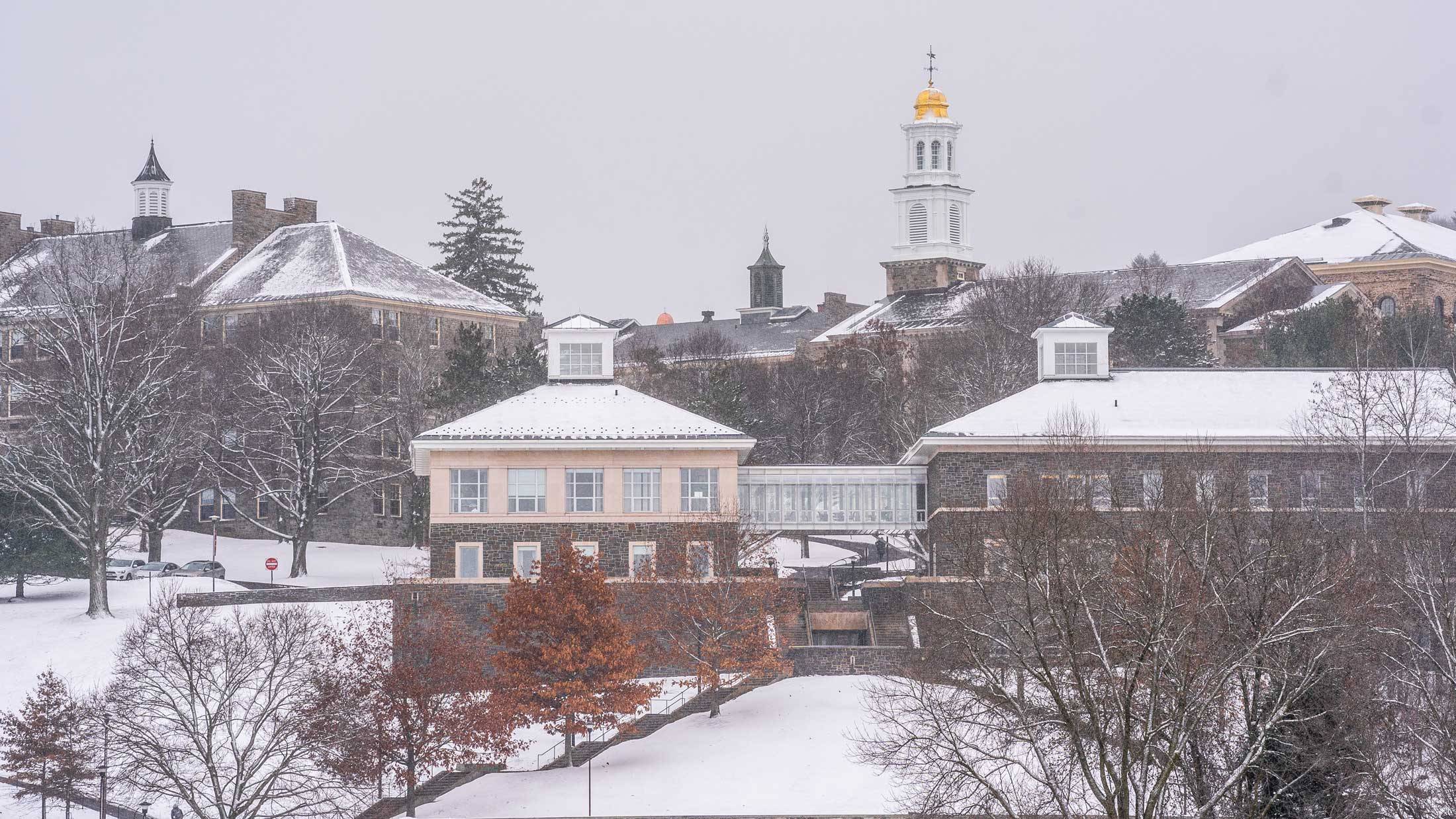 The future of technology and climate change. A study of literature as a reflection of society. An examination of America’s response to cyberbullying. The role of social media in online solidarity. These are just some of the presentation topics for the January 2021 Scholars Symposium.

The event showcased projects from Colgate’s Alumni Memorial Scholars (AMS), Benton Scholars, and Office of Undergraduate Studies (OUS) Scholars. Attendees joined via web browser and moved around the virtual conference space, interacting with others by viewing posters and media and having video or audio chats.

Faculty Director of AMS and Associate Professor of Physics Rebecca Metzler attributed the success of the symposium to the online platform Gather. “We typically have our symposium in person and were trying to think about how we could have an engaging and interactive space to mimic the in-person event,” she explained. “The great thing about gather.town is that we could embed students’ posters or video presentations throughout the virtual room, and people could walk around to interact with the poster, videos, and the presenters — making it really feel as if you were at a symposium. We also sprinkled some games throughout so that our attendees would have fun and interact with one another.”

AMS scholar and sociology major Caraline McDonnell ’21 focused her research on ideas represented in children’s literature, exploring varying depictions of themes or people, depending on the country or common political discourse. While examining picture books on prominent display in public libraries in a number of European countries, she coded for the prevalence of certain races and body shapes, as well as the strength of stereotypical gender display.

“Children’s books are one of the first messengers our youth receive about life and values,” she said. “Discovering what messages are being sent out to children, whether intentional or not, can help us to decipher what beliefs they may have later in life — and the messages the general population may value at the moment.”

Mehek Singh ’24 leveraged her experience as a Benton scholar to further her interest in climate change.

“I’m planning on majoring in either political science or international relations, so I wanted to connect my project to how the government has played a role in climate change and what kinds of policies should be implemented,” she said.

The impact of COVID-19 led several scholars to reevaluate and reimagine their project proposals. AMS scholar Melissa Verbeek ’21 had originally planned on traveling to Amman, Jordan, with Leila Ismaio ’21 to implement a Projects for Peace fellowship.

“We still wanted to be able to work with refugees over the summer, so we reached out to Catholic Charities in Baton Rouge, Louisiana — a refugee resettlement organization,” she explained. “They indicated that there was a gap in their English as a Second Language (ESL) programming, specifically for the youth in the families that they serve, and that many of these youths were experiencing difficulties learning English in school. Therefore, Leila and I decided to take a Teaching English as a Foreign Language (TEFL) course to become certified to teach TEFL, while simultaneously designing a summer camp initiative to virtually teach students.”

Verbeek utilized her AMS funds to cover the cost of the course. “It was important that we became certified to teach TEFL in order to learn methods for effective teaching and curricula development,” she noted. “I am really passionate about refugee empowerment initiatives and public policy surrounding resettlement. Additionally, I am an education minor, and I believe strongly in the importance of equitable and accessible education.”

For McDonnell, the Scholars Symposium served as a celebration of innovation and imagination. “Being an AMS scholar has given me the opportunity to pursue a project of my own choice, and by my own initiative, which I believe is unique to the Colgate experience,” she said. “I relished the opportunity to engage with a community that values learning and expansion.”