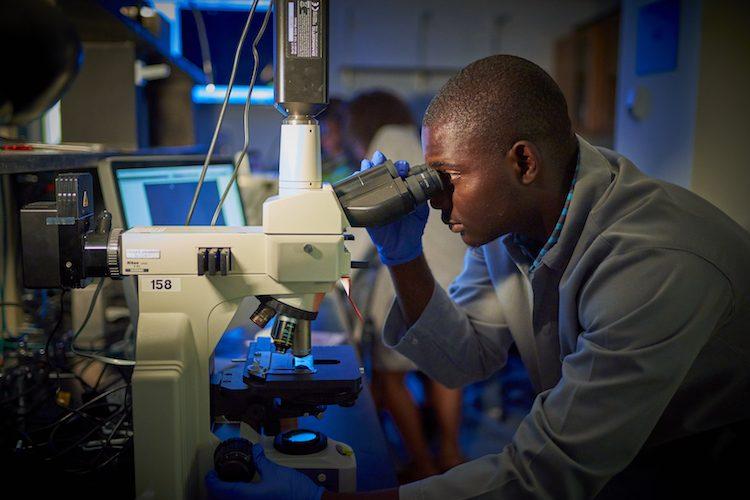 Engda Hagos, Associate Professor of Biology, works on experiments with OUS students in his laboratory in Olin Hall.

Common belief states that those who play together, stay together. New research by Professor Jennifer Tomlinson and Rachel Geyer ’17 suggests that this popular sentiment may be true. The research team compared physically demanding activities, like running with ankle weights, with more fun activities, like attempting to pick up odd objects with chopsticks, to determine the activity that fostered a better bonding experience between both married couples and platonic friends. Across the researcher’s four studies, they found that, in comparison to physically challenging activities, fun-filled joint tasks were seen as more beneficial to creating a stronger relationship between couples. These new findings may be applicable to your own relationships.

“The most direct implication is if you were planning a date night,” said Tomlinson. “Our results show that you don’t need to do something that is physically arousing. It’s better to opt for something you know you and your partner will enjoy.”

A team of researchers, including Colgate Professor Ahmet Ay and two former Colgate students now in grad school at UCLA, have published research that identifies a biological control switch in the vertebrate segmentation clock of developing zebrafish. Those findings could lead to new methods in the prevention of birth defects or cancers in early human development.

“The study helped shed some light on how life is formed (in zebrafish, and potentially in humans); how the cells inside embryos should form certain gene expression harmony to attain functional development,” said Ha Vu ’17, who is now working on her PhD at UCLA, focused on on early-stage cancer detection.

“Getting hands-on multidisciplinary research experience at Colgate sparked my interest in the field and led me to pursue a PhD,” said Soo Bin Kwon ’16. “Although my current work at UCLA is quite different from the published project, I definitely benefit from the strong work ethic that I learned working with Professor Ay.”

Creation of an instrument to measure the polarization of photons of astrophysical origin at medium to high energies (gamma rays in the MeV~GeV range) is now possible thanks to newly published research by Colgate University Physics and Astronomy Visiting Assistant Professor Cosmin Ilie and a team of international researchers.

Currently, there are no instruments capable of measuring the polarization of gamma rays in this range, and such measurements could be used to shed light on two fundamental assumed properties of nature: Lorentz invariance and Charge Parity Time-Reversal Symmetry.

One of the most intriguing mathematical consequences of Lorentz invariance is CPT invariance, or charge conjugation, parity, and time-reversal symmetry — whether time can be reversed, matter switched to anti-matter, or the behavior of a nucleus changed by reversing its special configuration.

However, one should be open to the possibility that Lorentz invariance, and consequently CPT symmetry, are not fundamental properties. The search for indications of those symmetries being broken is paramount to our fundamental understanding of nature.

“What our instrument could do, is to push farther the regime where we probe the validity of CPT or Lorenz Invariance, thus either finding signs of properties being broken, or if no such signatures are found, we would be pushing to even smaller values the upper bounds on the possible deviations from CPT or Lorentz violating terms,” Ilie said.

General mood disorders, including anxiety, major depressive disorder (MDD), and seasonal affective disorder (SAD), are major illnesses affecting people worldwide — nearly one-fifth of the global population, and a large majority of college-aged students, are impacted. Published literature suggests that a major driver of these mood disorders is connected to the disruption of the circadian clock or the brain’s molecular biorhythm that maintains the sleep cycle. After this misalignment of the clock occurs, says Colgate University Associate Professor of Biology Krista Ingram, it can lead to downstream effects that impact molecular pathways related to mood.

“We wanted to look at the circadian-specific genes that have been associated with mood disorders and model what they are doing in the circadian clock pathway,” Ingram said.  “Our aim was to see whether mutations in these genes are changing the alignment or phase of the internal clock relative to the environment, and that this misalignment actually correlates with depression.”

Guided by Professor Ingram and Colgate University Associate Professor of Biology and Mathematics Ahmet Ay, former students Amanda Liberman ’17, 1819 award recipient and current research fellow at the National Heart, Lung, and Blood Institute in Washington D.C., and Lumbardh “Lumi” Halitjaha ’19 greatly contributed to the success of the research. The team ultimately found that gene variants cause the circadian clock to become delayed or to speed up, thus affecting mood as these physiological pathways are no longer working at the precise time.