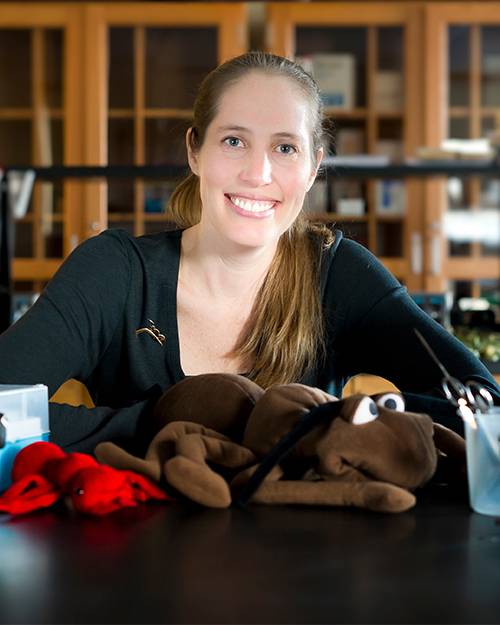 Associate Dean of the Faculty for Faculty Recruitment and Development; Professor of Biology

Project #1: The Paradox of Peak Performance in Elite Scholar-Athletes.

Elite scholar-athletes demonstrate a fascinating dilemma —optimizing both peak cognitive processing and physical performance from the same finite pool of daily energy. Peak arousal and performance levels are generally guided by two separate energetic forces: sleep homeostasis, the increase in fatigue with time since wakening, and circadian timing, daily cycles in arousal that are driven by an internal molecular clock. Although there is ample evidence that sleep homeostasis and circadian factors have large effects on athletic and cognitive performance, no study has tested these effects in the same study or in the same individuals. Our study aims to determine whether the performance of Division I scholar-athletes at Colgate University is influenced by circadian phenotype (chronotype), sleep features, or both. Our experimental design includes assaying diurnal variation in physical performance (sport- specific time trials), cognitive performance (visual computer tasks and course grades), and physiological effort (alpha-amylase analyses). We will characterize the self-reported circadian phenotypes (chronotypes) and use genetic analysis to validate the biological chronotypes and genotypes of participants. We will also characterize the sleep phenotypes of participants in order to quantify the relative effects of sleep debt and sleep quality on diurnal performance. Our results will significantly advance circadian and sleep research in four ways: we will identify the genetic basis of circadian effects on athletic and cognitive performance and use this information to disentangle the influence of sleep and circadian processes on effort and performance. Our innovative research design will allow us to characterize the relative strengths of circadian constraints on athletic versus cognitive performance and will also provide novel insight into circadian and sleep effects in both the physiological (the link between effort and performance) and cognitive (higher vs. lower-level cognition) research fields.

Generalized anxiety and major depression have become increasingly common in the United States, affecting 18.6 percent of the adult population.  Mood disorders can be debilitating, and are often correlated with poor general health, life dissatisfaction, and the need for disability benefits due to inability to work.  Recent evidence suggests that some mood disorders have a circadian component, and disruptions in circadian rhythms may even trigger the development of these disorders.  However, the molecular mechanisms of this interaction are not well understood.  Polymorphisms in a circadian clock-related gene, PER3, are associated with behavioral phenotypes (extreme diurnal preference in arousal and activity) and sleep/mood disorders, including seasonal affective disorder (SAD). Here we show that two PER3mutations, a variable number tandem repeat (VNTR) allele and a single-nucleotide polymorphism (SNP), are associated with diurnal preference and higher Trait-Anxiety scores, supporting a role for PER3 in mood modulation.  In addition, we explore a potential mechanism for how PER3 influences mood by utilizing a comprehensive circadian clock model that accurately predicts the changes in circadian period evident in knock-out phenotypes and individuals with PER3-related clock disorders.

Project #3: Timing is Everything: The influence of circadian rhythms and gene by environment interactions on test performance and risk-taking in humans

In collaboration with Neil Bearden (INSEAD, Singapore), Allan Filipowicz (Johnson School of Business, Cornell University) and Kriti Jain (IE Business School, Madrid), we will investigate the influence of circadian rhythms and gene by environment interactions on human task performance and risky decision-making. Circadian rhythms are one of the major drivers of human behaviors. Even small disruptions in circadian timing (jetlag or daylight savings time changes) can lead to declines in performance (e.g. traffic accidents or lower stock market returns), yet little is known about whether the associations found in human performance and circadian rhythms have a genetic basis, are influenced by the environment, or both (gene by environment interaction). The research team will integrate genetic analyses with psychological measures and behavioral tasks to investigate how an individual’s cognitive performance (as assessed by graduate school exams) and risk preferences (as assessed by risky decision-making tasks) are related to the time the task is performed and their chronotype, genotype and expression profile. This interdisciplinary endeavor explores a novel, exciting area of study in human sociogenomics, the molecular basis for human performance and risky decision-making.

The main research focus of my laboratory is to use ant colonies as model systems to study one of the central questions concerning the integration of complex biological systems, i.e. how do individuals organize local information and alter behavior in response? The advent of genomic technology and its application to non-model organisms has opened exciting research opportunities in behavioral genetics, particularly in comparative sociogenomics. We study the molecular basis of task allocation in ant colonies by assaying gene expression between workers exhibiting different task behaviors. This gene expression project has two main goals:

Currently, we are focusing on two target genes, outlined below.

Period
We have also characterized the circadian rhythm gene called period (per), in harvester ants. The behavior of harvester ant colonies is regulated by daily behavioral patterns of workers. Tasks that occur outside the nest are regulated by day length and temperature, but inside tasks are not. Because so much is known about the circadian clock regulation pathway in insects, this gene has exciting prospects for experimental studies of ant behavior. Regulation of the circadian clock can be affected by the expression of per, by the rate of decay of per mRNA, or (for some insects) by changes in the ratio of different per types. Our data from laboratory and field colonies show that workers within the nest have different daily patterns of per expression than workers with outside tasks (Ingram, K. K., M. LeRoux, S. Krummey, 2011). Thus, the period gene and the circadian clock mechanism play a role in evolution of task allocation in ants. The finding that ants and bees show a similar developmental pattern of the onset of circadian rhythms suggests that there has been conservation in the molecular mechanisms regulating the evolution of division of labor and social organization across eusocial insects.

We recently characterized the other major genes (cryptochrome and clock) in the circadian pathway of ants to determine that ants (which evolved eusociality independently of bees) also have a mammalian-like clock. We aim to use the expression pattern of these clock genes in experimental studies to determine how ecological factors in the environment (such as food availability, day length) may provide cues for the regulation of behavioral genes.

Picker Interdisciplinary Science Institute: co-PI on grant to study 'Timing is Everything: The influence of circadian rhythms and gene by environment interactions on test performance and risk-taking in humans' Colgate University

NSF-DBI – Major Research Instrumentation:  co-PI on grant for the acquisition of a laser-scanning confocal microscope for multi-disciplinary research at Colgate University  ($487,262)

Singapore Ministry of Education: Member of collaborative conservation research grant with the National University of Singapore to study speciation patterns in Southeast Asia. ($678,911)