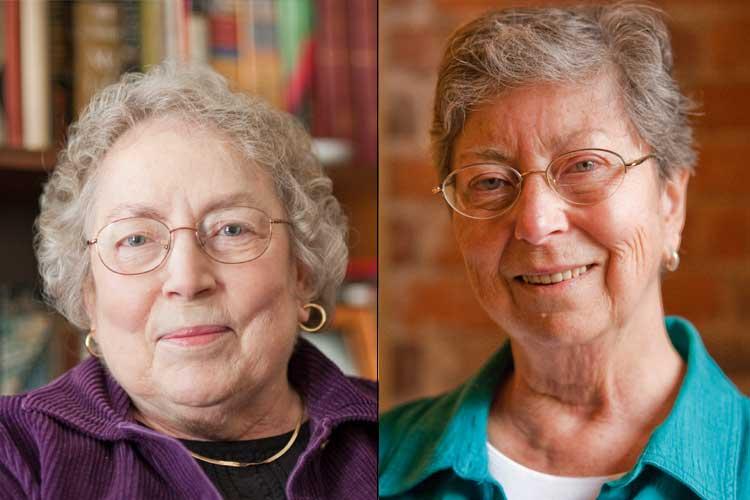 During a two-day symposium honoring professors emeritae Wanda Warren Berry and Marilyn Thie, alumnae displayed class notebooks from the 1980s and shed tears while recounting the impact of these teachers’ mentorship on their lives. Titled “Women and Religion, Philosophy and Feminism,” the event was held April 11­­–12.

While at Colgate, the professors helped develop a curriculum that included a feminist perspective and fought to make the university fully co-educational.

During Wednesday’s “Philosophy and Feminism” talk, Thie discussed her philosophies as an educator and her lifelong efforts to embrace feminist politics in search of justice. Hired in 1974, known as “The Year of the Woman,” she helped develop the women’s studies program on campus.

“I remember spending one summer reading everything written by womanist theologians, authors, and poets I could find. At that point, none of us were using women in women’s studies, and it was wrong,” Thie said.

“[Thie’s] connection to questions at the deepest philosophical level is entirely natural and not separated from other aspects of her identity. Philosophy is always there, but feminism modifies that venture,” Cuomo said.

On April 12, Berry led the “Women and Religion” talk by speaking about the hurdles she faced in higher education and becoming a professor, while highlighting the dramatic change in women’s opportunities she’s experienced throughout her life. She stressed the necessity of inclusive teaching when covering religion and the effect it can have on oppressed individuals.

“Persons who are devalued in their societies often are empowered by believing they have a relationship to a transcendent source of meaning that enables them to challenge the social order,” Berry said.

Her talk was followed by speeches from two of her former students, Amy Allocco ’97, professor of religious studies at Elon University, and Teresa Delgado ’88, associate professor of theology and ethics at Iona University. The women addressed how Berry’s passionate mentorship shaped them into the scholars and professors they are today.

“Feminist mentoring matters, as does being pushed to develop an intellectual perspective to not only challenge and analyze what is there but also to spot what is missing and who has been left out of the record,” Allocco said.

Also that day, Dianne M. Stewart, who is a professor at Emory University, discussed “Feminist and Womanist Religious Thought.” Provost and Dean of the Faculty Tracey Hucks ’87, MA’90 responded during Stewart’s talk, which focused on women of color and what roles they play in the religions in which they are involved.

“I found the talks really inspirational because they tell us about women who have helped other women and what they have done with their lives and what they care about in the world,” said event organizer Chris Vecsey, department chair and professor of religion.

“It was interesting to see the effect the teachers had on [the alumnae’s] lives,” Claire Bergerson ’21 said. “It showed what Colgate can be if you go into it thinking your classes and teachers could change your life.”