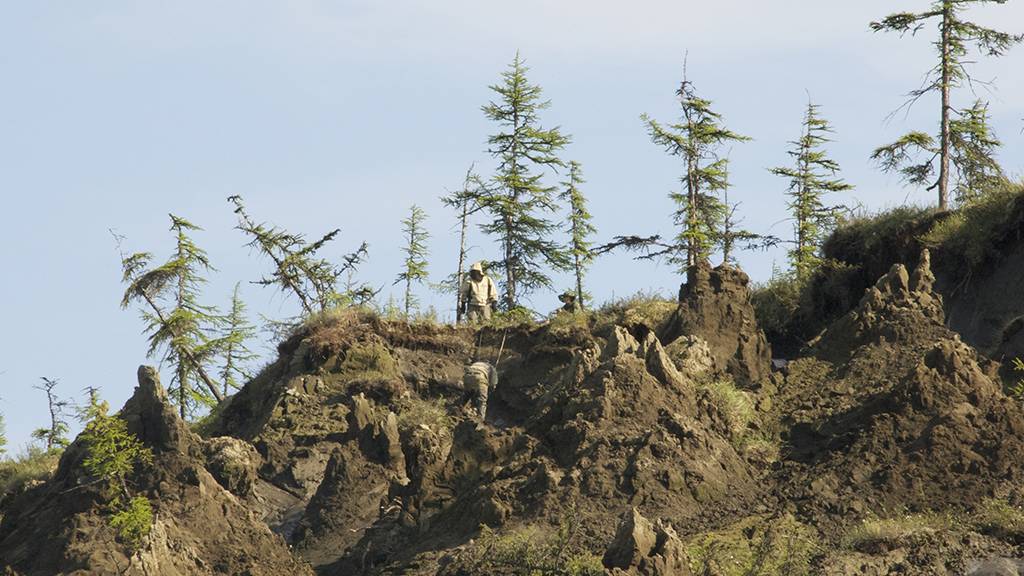 An image of permafrost heaving in northeastern Siberia at Duvanny Yar, on the Kolyma River in the Sakha Republic, Russia. (Photo by Mike Loranty)

Colgate Associate Professor of Geography Mike Loranty is one of 33 international experts who reviewed more than 200 recent studies related to how climate change and permafrost are interacting, and he says the results are not encouraging.

The science and policy experts focused on four key permafrost regions: the Arctic Ocean, the Boreal Forest, the Arctic Tundra, and the Tibetan Plateau. Together called the permafrost domain, these areas are especially vulnerable to climate change because of their dependence on ice. This is a problem because they are warming three-times faster than the global average, with many regions already 2 to 5 degrees Celsius warmer than before the Industrial Revolution.

“Protecting permafrost is crucial because once this frozen ground starts to thaw the process is difficult to reverse and it will contribute further to climate change,” said Loranty.

Permafrost affects only 10 percent of the Earth’s surface—mainly in the far north. However, scientists say changes in these distant regions should concern everyone. According to their study published last month in Frontiers in Environmental Science, rapid warming is causing cascading changes in permafrost regions that are threatening biodiversity, the stability of global climate, and the wellbeing of over 1.5 billion people.

The study estimates that the permafrost domain contains between 2.5 and 3 trillion tons of organic carbon; more than all of Earth’s other life, soil, and atmosphere combined. As this plant and animal material begins to decompose, microorganisms produce CO2, CH4, and N2O, the three most important long-lived greenhouse gasses. Under more extreme warming scenarios, permafrost rot could produce hundreds of billions of tons of emissions.

“Ignoring permafrost is essentially like leaving a major greenhouse gas emitting country like the United States out of climate negotiations, which is not a good idea,” said study author Susan Natali from the Woodwell Climate Research Center. Another study author Jens Strauss from the Alfred Wegener Institute said, “Today the permafrost regions are already releasing nearly the same amount of greenhouse gasses as Germany’s annual emissions.”

The study reveals that dramatic changes are progressing decades faster than expected. Sea ice and snow cover have plummeted, storms have intensified, soils and coastlines are eroding, and wildfires are burning through the winter.

However, the experts insist that a “time bomb” scenario of runaway greenhouse gas release is unlikely. Instead, they explain that the faster global emissions can be cut, the more the permafrost domain remains stable and healthy. Rather than an abrupt belch, greenhouse gas release from the permafrost domain could last hundreds of years and occur across millions of square kilometers. This results in a slower climate feedback but also makes it extremely difficult to stop.

As important as permafrost climate feedbacks are, the experts emphasize that the permafrost domain is more than just “a pile of greenhouse gas precursors.” It is home to tens of millions of Indigenous and immigrant people, and it supplies water and resources to billions more, largely around the Tibetan Plateau.

Rather than climate mitigation (making things less bad), the authors propose “climate restoration”—a return to pre-industrial climatic conditions. They claim this is possible through the rapid rollout of renewable energy, the conservation of intact ecosystems, and the development of negative emissions technologies. Abbott said, “We’ve got a choice between fossil fuel use and the continued existence of permafrost ecosystems. If we pick wrong, the consequences for human rights, biosphere integrity, and global climate will be severe.”