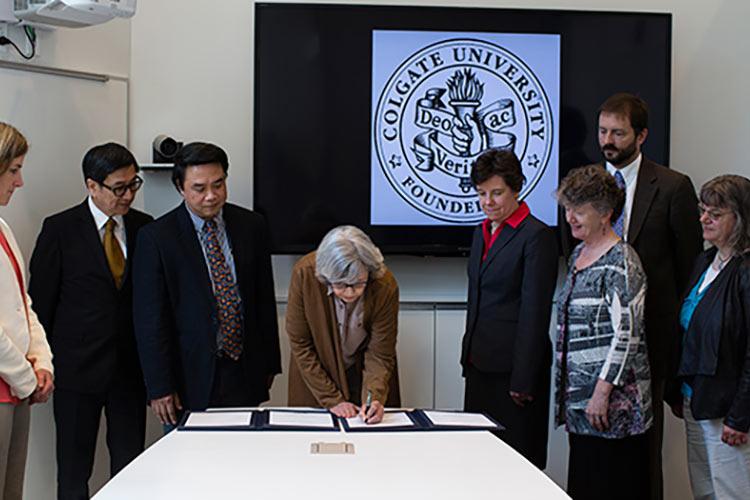 Officials from both universities meet in James B. Colgate hall to sign a new memorandum of understanding on June 7, 2016.

Students looking for a dynamic off-campus experience that also allows them to engage in scientific research will have more options in 2017, thanks to a new agreement between Colgate University and the National University of Singapore (NUS).

After more than a year of exploration and development, representatives of Colgate and the NUS signed a memorandum of understanding June 7, creating a new exchange program to benefit students from both institutions, and to act as a catalyst for future faculty collaboration.

The agreement affords new research options for students in the departments of mathematics, computer science, biology, chemistry, and physics & astronomy. Jason Meyers, associate professor of biology, will lead the first group of Colgate students to Singapore in the fall of 2017, but unlike other full-semester study groups, Meyers will accompany students for just a few weeks before returning to campus in Hamilton, N.Y., to teach.

In the spring, NUS students, already acquainted  with students from Colgate, will then come to Hamilton, N.Y., to take courses, conduct research, and experience the liberal arts.

“We really wanted to build on the successful National Institutes of Health program in Washington, D.C., in which students take two courses and independent research for credit,” said Nicole Simpson, professor of economics and associate dean of the faculty for international initiatives. “Undergraduate research isn’t common at large institutions internationally, so there was a short list of places that are rigorous and strong in the sciences, but that also applaud undergraduate research.”

Simpson said that, because NUS has existing relationships with Yale and Cornell universities, their faculty and administrators are already familiar with the liberal arts, and their curriculum has rigorous standards akin to Colgate’s.

The new partnership was developed, in part, thanks to Ed ’62, P’10 and Robin Lampert P’10, whose generosity supported the founding of the Lampert Institute for Civic and Global Affairs at Colgate. The Lamperts have made a $2.5 million commitment to internationalization, and they also offered to match additional gifts of $500,000 up to $2.5 million for international initiatives.

NUS Professor Roger Tan, vice dean and faculty of science, education and special duties, said he hopes this new endeavor will create more opportunities for cooperation in the future between the two institutions of learning.

“[NUS] students will certainly benefit from your broad-based liberal arts education,” Tan said during a visit to Colgate earlier this month. “I hope we give them an unforgettable experience.”

Professor Damhnait McHugh, Colgate natural sciences and mathematics division director, said that when she visited NUS with Meyers, Simpson and four other faculty in the natural sciences on their fact-finding mission this past January, it became abundantly clear that the university had extensive support systems and a strong commitment to welcoming international students.

“We want our students to really make the most of their social and cultural experience as well, and we hope for international faculty collaborations to develop in the coming years,” McHugh said. “We are very excited about the possibilities.”