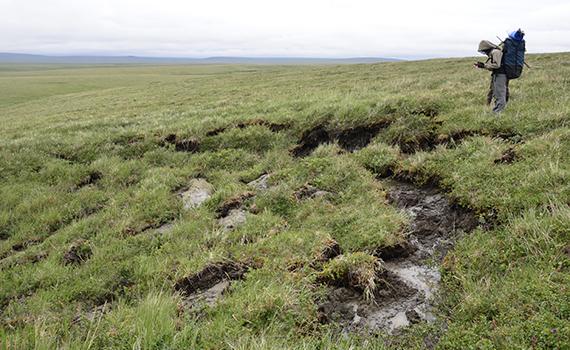 Professor Michael Loranty was among several Colgate professors in Siberia photo by Logan Burner I’ve also included a photo of thawing permafrost (which is relevant to the proposal), the person under the bug jacket is me and the photo was taken in Siberia by Logan Berner.
studies permafrost

“This instrument has two special capabilities,” explained Rowlett. “It is able to make measurements on extremely small sample volumes, which is important for working with trace quantities of valuable materials like proteins. In addition, it can be used to conduct measurements on complex mixtures like soils and natural materials like leaf litter, without requiring complex mechanical and chemical preparation.”

On to the Galapagos Islands, geology professor Karen Harpp’s grant will support fieldwork to better understand the way volcanic islands evolve. She and her students plan to document the history of the archipelago’s three oldest volcanoes, which together record almost three million years of the mantle plume’s history. The research is “relevant to ongoing conservation and preservation efforts at oceanic archipelagos worldwide,” explained Harpp.

Heading north, geography professor Michael Loranty will study the influence of vegetation on temperatures in permanently frozen Arctic soils, called permafrost. “As these soils thaw, they release carbon to the atmosphere, which will enhance climate warming,” he explained.

Over the next few summers, Loranty and his students will be conducting fieldwork throughout Alaska and Siberia along with colleagues from the Woods Hole Research Center and University of Alaska. “Our ultimate goal is to help inform climate models and policy,” he said.

Computer science professor Michael Hay and collaborators are exploring new technologies for privacy-preserving data analysis. “The goal is to build software that provides rigorous privacy protection but at the same time allows researchers to analyze the data and discover aggregate trends,” explained Hay, who is teaming up with researchers at Duke and the University of Massachusetts–Amherst.

“Although recent news about hackers illustrates the importance of keeping data secure, there are some scenarios, such as the U.S. Census and genetics research, in which there is a compelling need to share sensitive data. In these kinds of scenarios, one must balance the benefits of sharing the data with the risks of disclosing sensitive information. This project is about designing software that can act as intermediary between the sensitive data and the stakeholders who wish to analyze it.”

Another hot topic being examined is whether we could one day transport solar energy as a liquid, like methanol or ethanol. Anthony Chianese, associate professor of chemistry, and his student researchers are looking into the possibilities for converting the sun’s rays into a fuel alternative. Read more about Chianese’s research.