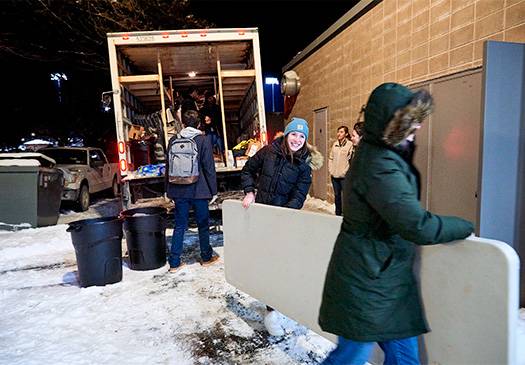 Colgate students at work on the set of Odd Man Rush at Reid Athletic Center. (Photo by Andrew Daddio)

By: Daniel DeVries
Department of Art and Art History
Share

When producers with deep Colgate ties decided to film a feature-length hockey movie in central New York, they turned to Colgate for more than 20 interns to assist with the major undertaking.

Grant Slater ’91, his brother, Todd, and friend Jonathan Black of Slater Brothers Entertainment decided to film Bill Keenan’s hockey memoir, Odd Man Rush, at Colgate and elsewhere in and around Hamilton because of a rural landscape that closely resembles that of the Swedish locations in the book, and because of their affinity for the region.

The Slater brothers’ longstanding bond with Colgate dates back to 1977, when their father, Terry Slater, first took the reins as head coach of the men’s hockey team, leading the Raiders to compete in the national finals in 1991.

“We knew we needed an elite institution like Colgate, and we needed arenas that kind of paralleled the level of play you see in Europe,” said Grant Slater, who played hockey for Colgate and later went on to play in Sweden. “We said many times that the landscape here is very similar to over there. It made it pretty clear to us that it made a lot of sense to shoot here. The support of the community has been tremendous.”

It also didn’t hurt that one of the locations, an old locker room in Colgate’s Reid Athletic Center, was also used in the filming of the legendary hockey comedy Slap Shot, starring Paul Newman.

The Slater brothers also enlisted the help of Colgate’s Office of Career Services and the University’s Film and Media Studies program to help recruit interns. For Assistant Vice President of Institutional Advancement and Director of Career Services Teresa Olsen, the opportunity for students to engage in the production of a feature film was perfect.

“The great thing about this internship in particular was that some of the work was about being hands-on with the nuts and bolts of making a film — the cinematography, the sound, the production. Then, there was a need to help with the administrative tasks associated with prepping for distribution: marketing, writing, and social media. Our students would be involved in so many aspects of the process.”

Olsen said that the part-time internship experience included working sessions with the filmmakers, select readings, an optional script-writing workshop, and ultimately a final exam about their work. It was also important to design the internship around students’ academic schedules, Olsen said of the 10–12 hour weekly internship commitment.

“They were very educationally-focused about managing the internship experience for students,” Olsen said. “It was not only about how the filmmakers would benefit from great interns but, from the start, it was also largely focused on what the students would learn. The producers insisted that this would not just be a job where you go get coffee. It would be hands-on work, where students would interact at the highest levels with the producers, the director, and the leads of each of the main areas overseeing the film.”

Amanda Capra ’21 was a marketing and production intern for the film. She said the process has opened her eyes to opportunities within the entertainment industry. She said, “This internship has challenged me to be creative, to think from multiple perspectives, to immerse myself in unfamiliar environments, and to step out of my comfort zone.”

Luke Jeramaz ’21 agreed. “I have been able,” he said, “to experience the ins and outs of producing a multimillion dollar film, which will be sure to serve me well in the film industry after graduation.”

“They had a primary group and a secondary group, so they get that exposure,” said Black, who describes Odd Man Rush as hockey’s version of Lost in Translation.

Todd Slater said, outside of filming at Colgate’s Class of 1965 Arena and Reid Athletic Center, other locations included downtown Hamilton, the Hour Glass, Rye Berry, and nearby at the Clinton Arena, Hamilton College, and the Brewster Inn in Cazenovia.

While the last day of filming wrapped up February 28, another four to five months of mixing and editing remain, and the producers say that they are aiming for a winter 2020 distribution. But, before that, the Slater brothers will be back in town for the annual Hamilton International Film Festival, July 22–28.

“Eleven years ago, when we started the film festival, part of the idea was to bring more arts and culture to this area,” said Todd Slater. “To go through that process, and now to make a terrific movie here … it’s been incredible.”