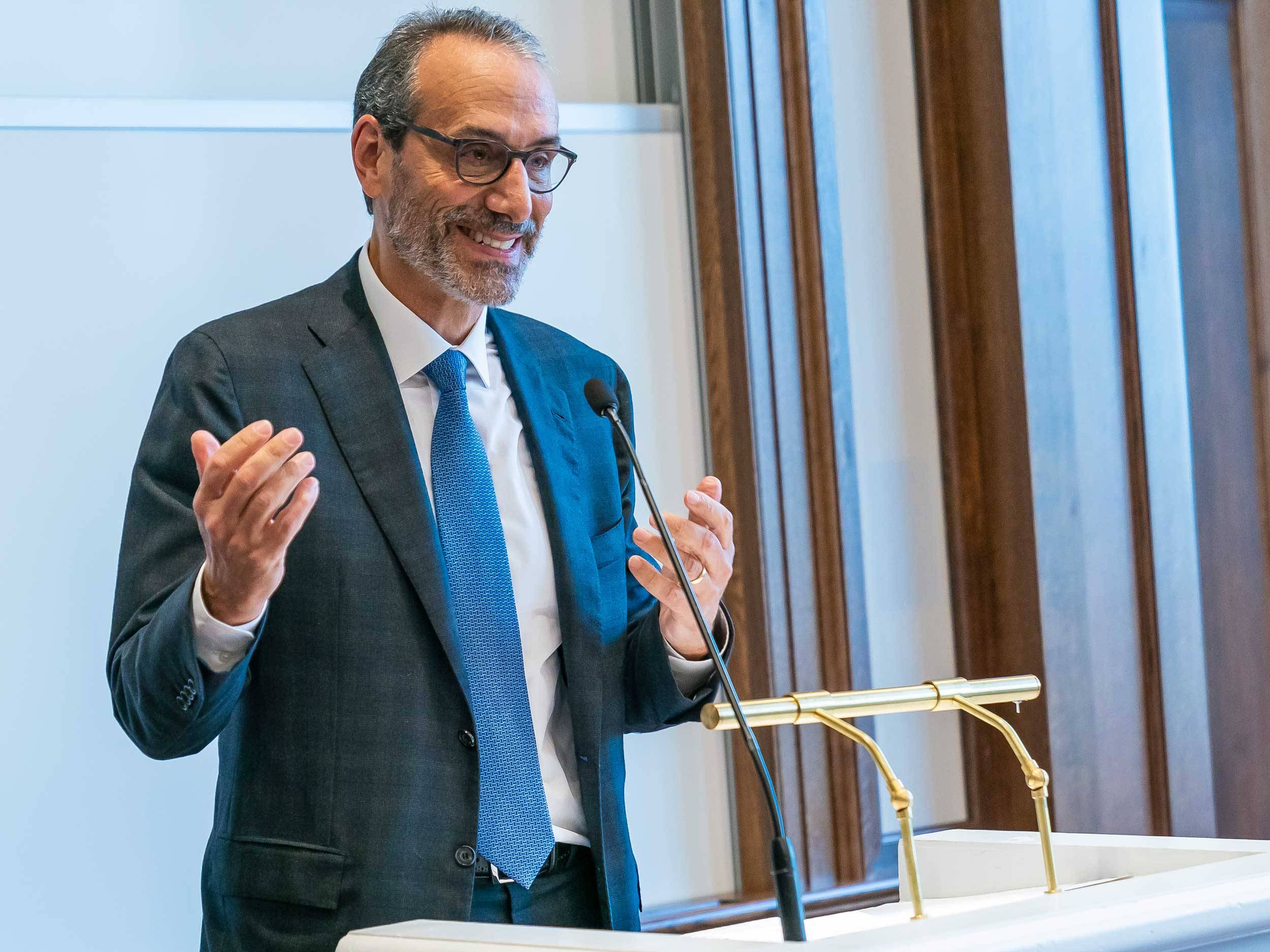 Dan Benton ’80, H’10, P’10 has secured his place as Colgate’s most generous benefactor, making a $25 million gift in support of the University’s Middle Campus Plan for Arts, Creativity, and Innovation and other elements within The Third-Century Plan.

“On behalf of the entire Colgate community, I thank Dan Benton for this transformational gift,” says Colgate University President Brian W. Casey. “It is the latest and most profound example of Dan’s commitment to Colgate, his love of this place and its people. It reminds us that, even in this dark present, a bright future awaits.”

The gift, announced today by the Board of Trustees, provides $20 million to construct The Benton Center for Creativity and Innovation, the anchor of a two-building, 36,800-square-foot complex on Colgate’s Middle Campus to house computer science, film and media studies, theater, and dance.

“I am excited to support the Middle Campus initiative at Colgate,” Benton says. “It promises to transform the University — both intellectually and physically. The Benton Center for Creativity and Innovation will become a hub for interdepartmental collaboration and experimentation. In the words of Steve Jobs, ‘It’s technology married with liberal arts, married with the humanities, that yields us the results that make our hearts sing.’”

Together, the two parts of the complex will include maker spaces, computer and media object labs, studios, and new music practice rooms. Flexible performance and exhibition spaces will provide opportunities for experimentation and for exploring new modes of communication.

“By placing computer science in physical proximity with creative and performing arts departments, exciting new scholarly and performance-based collaborations become possible, as do cutting-edge opportunities for team-taught and linked courses that dismantle outdated barriers between the arts and the sciences/technology,” says Lesleigh Cushing, the Murray W. and Mildred K. Finard Professor in Jewish studies and religion, who has shepherded the Middle Campus planning process in her role as an associate dean of the faculty. “The Middle Campus creates new and exciting opportunities for students to learn with their hands and bodies, to experiment with new ideas and new modes of doing things, and to collaborate with one another and the faculty. Dan’s transformational gift sets the Middle Campus in motion, and his insights have made the vision stronger and more dynamic.”

The Benton Center computer labs will host coding and programming as well as digital music composition and digital photography. Students and professors entering The Benton Center and its companion buildings on Middle Campus will find media labs for using and interpreting old technologies and analyzing the new — as well as rehearsal and performance spaces for student music, dance, theater, spoken word, and improvisational groups. The Middle Campus will be home to architecture studios; scenic, lighting, and costume design spaces; and galleries, where students will be curators.

Benton, a trustee emeritus and member of the University’s Campaign Leadership Committee, has already made significant investments in Colgate totaling nearly $50 million during the last two decades — in the Colgate Fund; the Benton Scholars program; in Career Services, where he provided leadership funding to build Benton Hall; and most recently, his first move to support the Middle Campus with an endowed chair in arts, creativity, and innovation.

“In his Colgate connection and in his professional life, Dan has demonstrated a genius for identifying the key elements that will drive future success in an institution,” says Campaign Steering Committee Co-Chair Gretchen Burke ’81, P’11,’20. “He has supported those areas in ways that also encourage others to follow his lead.”

Just as Middle Campus will serve as a physical point of connection between the hill and West Campus, it promises to establish new academic links between departments, curricula, and student co-curricular interests — from staging dance performances to developing entrepreneurial ventures through Thought Into Action. New technology, media, and modes of learning will serve new ideas, brought to Colgate by an expanding number of students and scholars inspired by the chance for unfettered creativity, collaboration, and mentorship.

“The physical legacy of Dan’s philanthropy can be seen today on the traditional academic quadrangle with Benton Hall,” Casey says. “Future generations will see it in the newly emerging academic quadrangle with The Benton Center for Creativity and Innovation as well. His gift advances The Third-Century Plan and the Middle Campus Plan, living documents that will secure the University’s place as a leading national institution for both education and research.”