Coming Out, Coming Home: 10 Years of LGBTQ Studies at Colgate 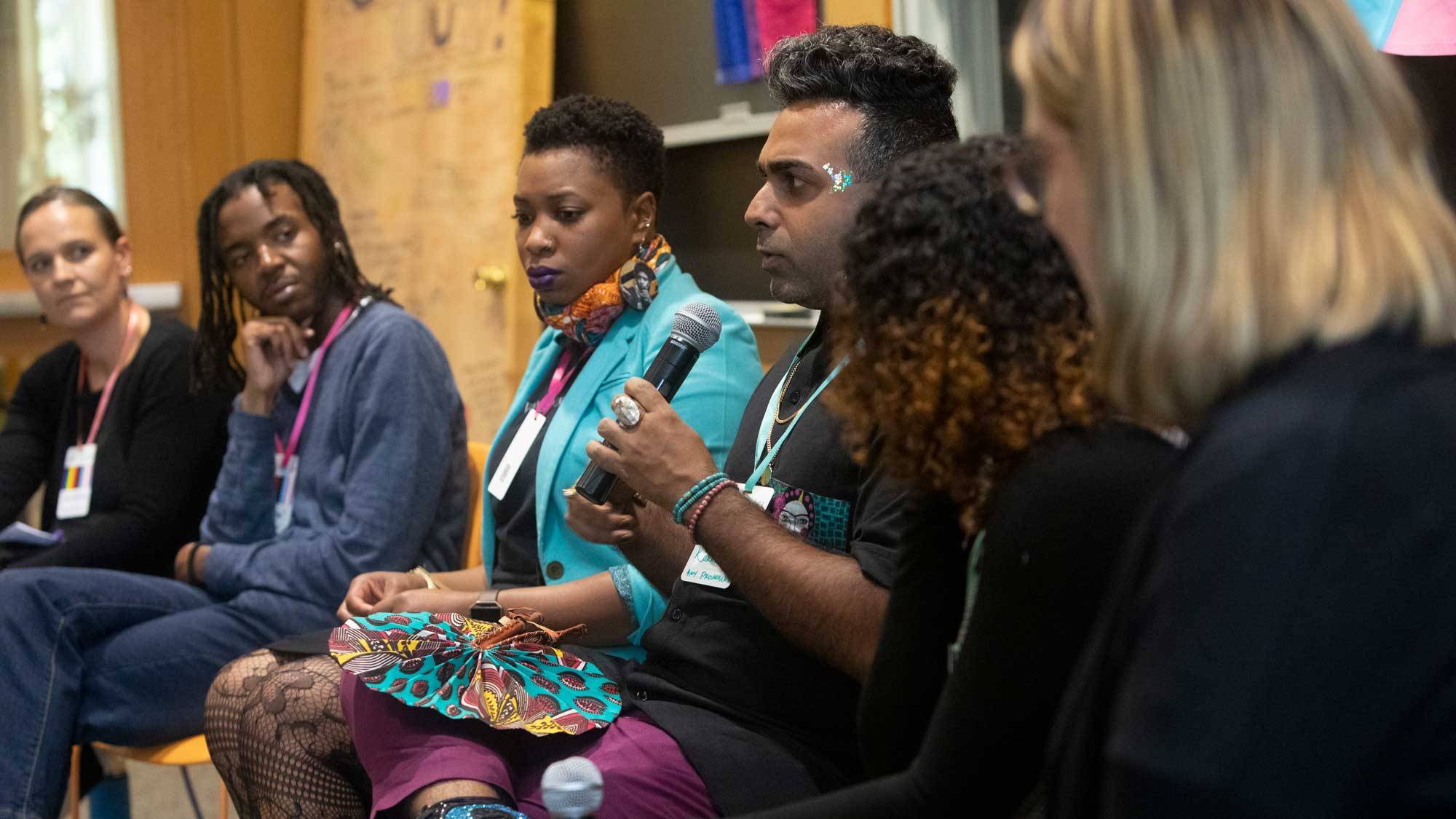 The flag features three horizontal bands of color. The pink band represents women; the blue, men; and the yellow, those of a non-binary gender. It hangs high in the Center for Women’s Studies, where faculty, alumni, students, and invited professionals gathered on October 4 and 5 to celebrate the 10th anniversary of Colgate’s LGBTQ Studies Program with a symposium titled Home | Coming | Out.

Coinciding with Homecoming Weekend, the symposium reflected aspects of belonging, visibility, and well-being through events that considered the past, present, and future — the opportunities and challenges — of LGBTQ studies. It included a broad view of scholarship and pedagogy as well as institutional and local impacts.

Ken Valente, professor of mathematics and LGBTQ Studies, organized the symposium. “I want people to think about our forms of engagement,” he said. “I want to open up an intellectual space that values the experiences of those who identify somewhere on the LGBTQ+ spectrum.”

The symposium featured a keynote address by María Scharrón-del Río, interim associate dean of the School of Education and professor of the School Counseling Graduate Program at Brooklyn College, CUNY.

Scharrón-del Río, who uses the pronouns they and their, discussed the intersections of their identity as a queer Puerto Rican. “When coming out to myself about my sexual orientation in Puerto Rico, I struggled with who I wanted to be and who I was told I should be,” they said. “I found that there was no word that described me better than queer — queer felt like home.”

As part of their scholarship, Scharrón-del Río examines the erasure of queer voices. They also research linguistic invisibility as it pertains to gendered languages such as Spanish. “Latinx is a gender-inclusive cultural identifier that aims to acknowledge the vast spectrum of gender identities and address the oppression that LGBTQ+ people face in Latin American countries and diasporas,” they said.

Delving into the decolonization of identity, Scharrón-del Río emphasized the role of intersectionality. They explained that intersectionality encompasses the recognition of multiple marginalization, or the greater discrimination faced by individuals who hold more than one marginalized identity.

“In my case, I am both Latinx and queer,” they said. “Assuming the universality of the queer experience is a fallacy that has all the trappings of a colonial mentality.”

In addition to the keynote address, the symposium featured three panel discussions with returning alumni as well as invited faculty, student life professionals, and representatives of local support agencies. Topics included experiences and aspirations; the state and future of LGBTQ Studies; and fostering new forms of engagement with queer alumni and communities.

Keyra Jimenez ’19, who participated in the alumni panel, reflected on her experience as a queer person of color on campus. “I’m very honored to be one of 14 graduates of this program,” she said. “Colgate has been around for 200 years — this means there’s potentially another 200 years of LGBTQ Studies that can be explored. It’s amazing that we can go in so many different directions from here.”

When looking to the future of queer studies, Scharrón-del Río turns to solidarity through an appreciation of difference, a commitment to change, and a resistance to oppression.