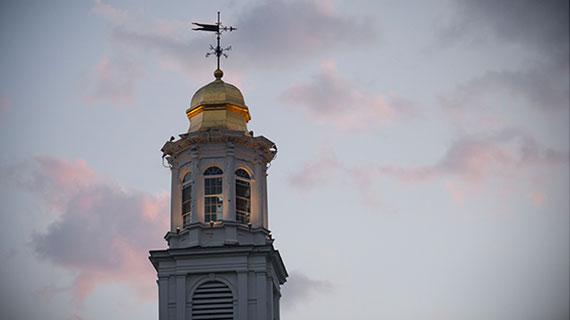 Douglas Hicks, Colgate provost and dean of the faculty, announced that the university’s Board of Trustees approved several appointments and promotions for faculty members.

“I ask everyone to join me in congratulating these highly valued colleagues for their significant professional accomplishments,” said Hicks.

Faculty members named to continuous tenure and promoted to associate professor are:

Hicks also announced several appointments, which President Jeffrey Herbst and he had recommended in consultation with the Dean’s Advisory Council. The appointments, confirmed by the board at its most recent meeting, are:

Cushing’s research is on the reception and culture-forming influences of the Bible. She has published seven articles and co-edited two volumes.  Her book titled Sustaining Fictions incorporates literary criticism and theory, Midrashic studies, and translation theory.

Hicks said that in her teaching, Cushing emphasizes close reading, critical thinking, strong writing, articulate oral expression, active participation, and ongoing exchanges between students in and outside the classroom.  Her service is extensive, including service on the Institutional Review Board, serving as university professor for Core 151: Legacies of the Ancient World, and co-chairing the strategic planning working group on Living the Liberal Arts.  She is currently serving as program director of Jewish Studies.

Douglas has been at Colgate since 1996, teaching highly rigorous courses in history that are widely popular with students. Hicks said that Douglas expects students to read carefully, write clearly, and work diligently. They do, and appreciate and respect his rigor and passion. His stature is just as high as a scholar.

Douglas is the author of four books,  and an edited volume.  His most recent book, Orderly and Humane: The Expulsion of the Germans After the Second World War (Yale University Press, 2012, with German and French editions published simultaneously), has been controversial and significant and has garnered multiple international prizes.  He received the prestigious, bi-annual Georg Dehio Award from the German government, as well as several other honors, including the 2013 George Louis Beer Prize, given by the American Historical Association.  It was named one of the Books of the Year for 2012 by The Atlantic.

David McCabe, professor of philosophy, has been named Richard J. and Joan Head Chair in philosophy.

Hicks said McCabe is a highly regarded colleague within his division and across the university.  His substantial contributions include his current work of directing the Lampert Institute for Civic and Global Affairs, and prior service in chairing the Department of Philosophy and serving as university professor for the Core 152 program.

McCabe’s scholarship has centered on questions of what he describes as “the nature, grounding, and extent of political authority in communities where citizens disagree deeply on important issues of value.”  His ongoing concern with the liberal state, and the arguments of its critics and defenders, is revealed in numerous scholarly essays as well as his book, Modus Vivendi Liberalism: Theory and Practice (2010, Cambridge University Press).

McCabe has led the philosophy/religion study group in St. Andrews, Scotland, and has served as a fellow in the Centre for Ethics, Philosophy, and Public Affairs at the University of St. Andrews.

Hicks said Nakhimovsky is highly regarded as a demanding teacher who cares deeply about the achievement of her students.  She has also contributed in important ways to the development of the general education program, and is serving as an elected member of the Committee on Promotion and Tenure.  She has served as director of Russian and Eurasian Studies, a position she currently holds, and of Jewish Studies.

Hicks said that Schult is an applied mathematician with broad interests encompassing mathematical modeling of combustion (i.e., spread of fire), spread of disease, applied graph theory, and network structure and functional properties.  The National Science Foundation has supported his research, and his recent publications have appeared in the journals Combustion Theory and Modeling, Physical Review E, and Chaos: An Interdisciplinary Journal of Nonlinear Science.

Schult also has developed software, most notably the internationally heralded NetworkX, a Python package useful for the study of the structure and dynamics of complex networks.  His service to the university community has included work as statistical consultant for the Campus Climate Survey, as Co-PI on the Howard Hughes Medical Institute Undergraduate Science Education Program Grant, as department chair, and his current appointment as director of the Picker Interdisciplinary Science Institute.