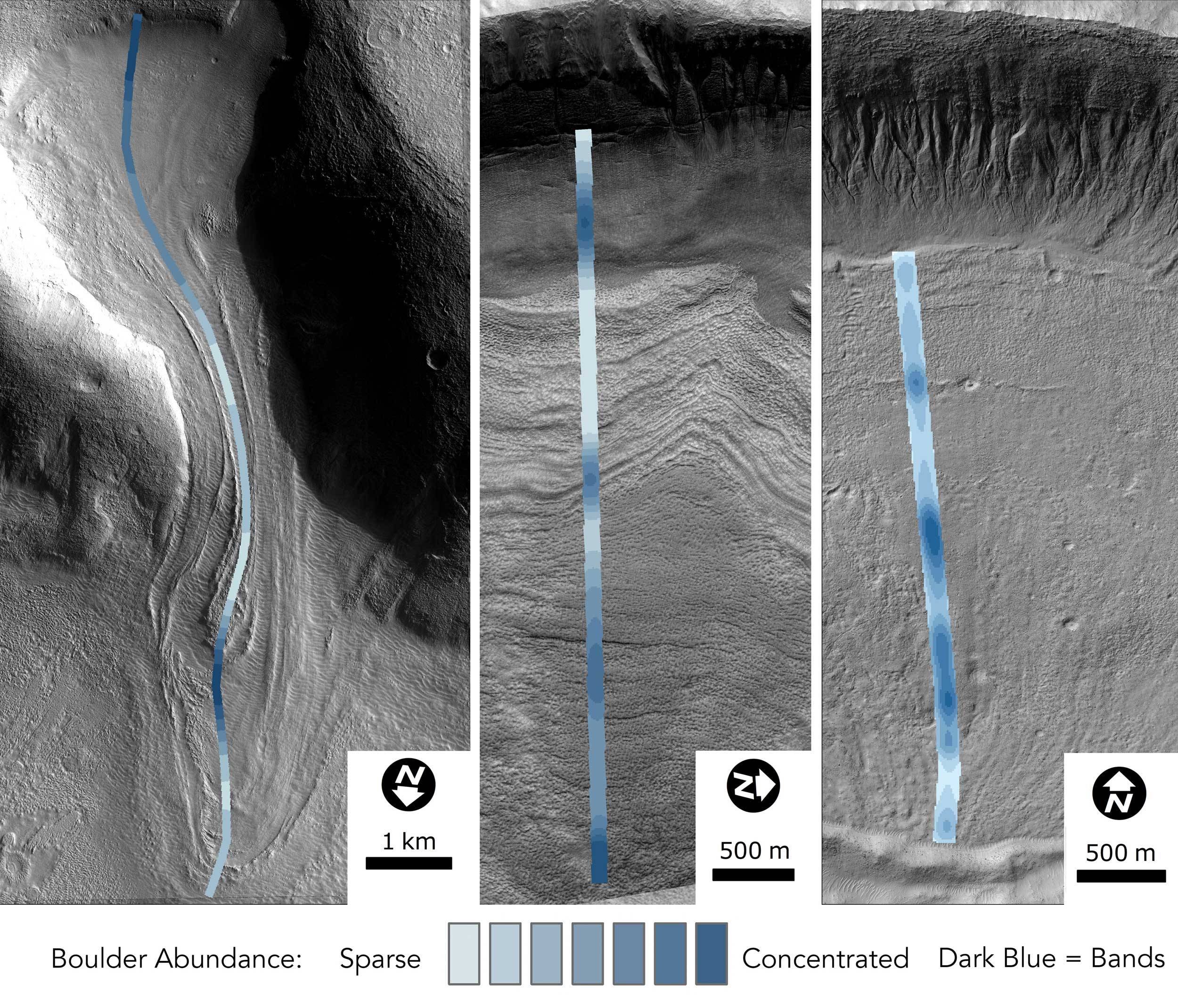 In a new paper published today in the Proceedings of the National Academies of Science (PNAS), planetary geologist Joe Levy, assistant professor of geology, reveals a groundbreaking new analysis of the mysterious glaciers of Mars.

On Earth, glaciers covered wide swaths of the planet during the last Ice Age, which reached its peak about 20,000 years ago, before receding to the poles and leaving behind the rocks they pushed behind. On Mars, however, the glaciers never left, remaining frozen on the Red Planet’s cold surface for more than 300 million years, covered in debris. “All the rocks and sand carried on that ice have remained on the surface,” says Levy. “It’s like putting the ice in a cooler under all those sediments.”

Geologists, however, haven’t been able to tell whether all of those glaciers formed during one massive Martian Ice Age, or in multiple separate events over millions of years. Since ice ages result from a shift in the tilt of a planet’s axis (known as obliquity), answering that question could tell scientists how Mars’ orbit and climate have changed over time — as well as what kind of rocks, gases, or even microbes might be trapped inside the ice.

“There are really good models for Mars’ orbital parameters for the last 20 million years,” says Levy. “After that the models tend to get chaotic.”

Levy concocted a plan to examine the rocks on the surface of the glaciers as a natural experiment. Since they presumably erode over time, a steady progression of larger to smaller rocks proceeding downhill would point to a single, long ice age event.

Choosing 45 glaciers to examine, Levy acquired high-resolution images collected by the Mars Reconnaissance Orbiter satellite and set out to count the size and number of rocks. With a resolution of 25 centimeters per pixel, “you can see things the size of a dinner table,” Levy says.

Even at that magnification, however, artificial intelligence can’t accurately determine what is or isn’t a rock on rough glacier surfaces; so Levy enlisted the help of 10 Colgate students during two summers to count and measure some 60,000 big rocks. “We did a kind of virtual field work, walking up and down these glaciers and mapping the boulders,” Levy says.

Levy initially panicked when, far from a tidy progression of boulders by size, the rock sizes seemed to be distributed at random. “In fact, the boulders were telling us a different story,” Levy says. “It wasn’t their size that mattered; it was how they were grouped or clustered.”

Since the rocks were traveling inside the glaciers, they were not eroding, he realized. At the same time, they were distributed in clear bands of debris across the glaciers’ surfaces, marking the limit of separate and distinct flows of ice, formed as Mars wobbled on its axis.

Based on that data, Levy has concluded that Mars has undergone somewhere between six and 20 separate ice ages during the past 300–800 million years. Those findings appear in PNAS, written along with six current or former Colgate students; Colgate mathematics professor Will Cipolli; and colleagues from NASA, the University of Arizona, Fitchburg State University, and the University of Texas–Austin.

“This paper is the first geological evidence of what Martian orbit and obliquity might have been doing for hundreds of millions of years,” Levy says. The finding that glaciers formed over time holds implications for planetary geology and even space exploration, he explains. “These glaciers are little time capsules, capturing snapshots of what was blowing around in the Martian atmosphere,” he says. “Now we know that we have access to hundreds of millions of years of Martian history without having to drill down deep through the crust — we can just take a hike along the surface.”

That history includes any signs of life potentially present from Mars’ distant past. “If there are any biomarkers blowing around, those are going to be trapped in the ice too.” At the same time, eventual explorers to Mars who might need to depend on extracting fresh water from glaciers to survive will need to know that there may be bands of rocks inside them that will make drilling hazardous. Levy and his colleagues are now in the process of mapping the rest of the glaciers on Mars’ surface, hoping with the data they have, artificial intelligence can now be trained to take over the hard work of identifying and counting boulders.

That will bring us one step closer to a complete planetary history of the Red Planet — including the age-old question of whether Mars could ever have supported life.

“There’s a lot of work to be done figuring out the details of Martian climate history,” says Levy, “including when and where it was warm enough and wet enough for there to be brines and liquid water.”