Century of Progress / Sleep: A Multi Media Adventure in the Vis Lab 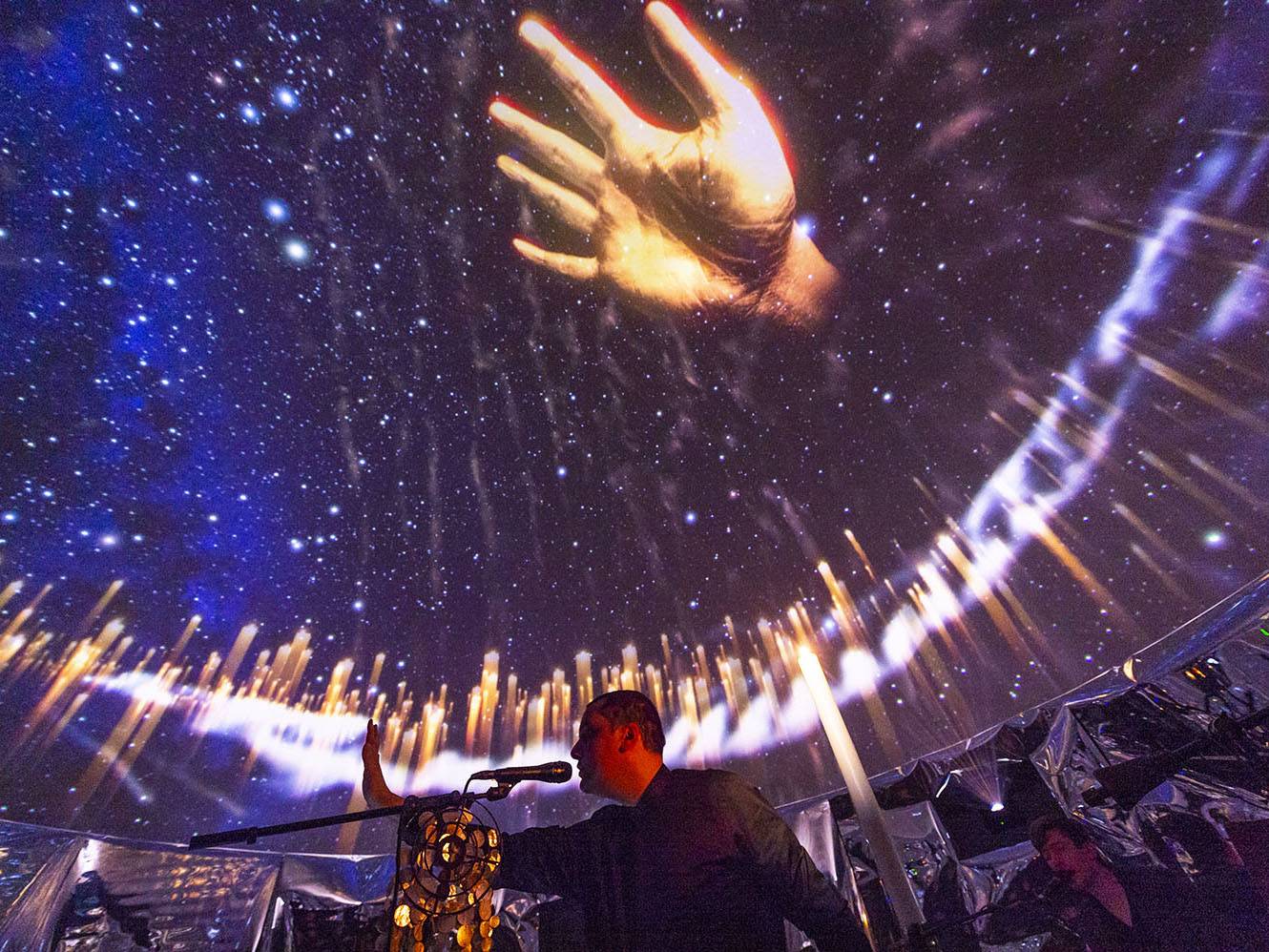 By: Jasmine Kellogg
Department of Art and Art History
Share

The Ho Tung Visualization Laboratory was transformed for the production. Mylar lined the walls, the first row of seats was removed to make room for musicians, fog machines and spotlights peeked out of corners.

Throughout the event, hypnotic images of clouds, stars, a glowing golden hand, and thousands of candlesticks swirled on the dome, reflected and distorted by the silver-lined walls, while eerie, sometimes discordant music filled the darkened room.

Bursts of fog and colored spotlights accentuated the musicians and the images on the dome, contributing to the immersive experience. “I’m using theatrical strategies to make us think about our bodies being lighter than they are,” said Catanese. “I would hope that by the end we were somewhat levitating.”

Catanese originally developed the opera as a solo piece, projecting images on a screen behind him and electronically manipulating his voice and the images using custom software.

Catanese said he was inspired by several residencies spent in the deserts of the American West, and by his interest in human beings’ conceptions of progress, truth, certainty, and nature. “I wanted to make a project a little bit about the desert and its role in thought making,” he said.

This year’s Christian A. Johnson Artist in Residence, the artist used his residency at Colgate to expand the libretto by two sections. He invited his ensemble of musicians to listen to his solo performance and then interpret their impressions on their instruments.

Several students collaborated on the project as well. Computer science major Francis Criscione ’21 spent hours throughout Catanese’s residency experimenting with filming the images of the golden hand, swirling fog, and candlesticks — major themes of the production.

Criscione emphasized the experimental nature of the project. “Experimentation lets you into this environment where thought and experiment become the same,” he said. “You can stumble on things that really encapsulate your thoughts in ways you didn’t expect.”

Criscione will spend the summer working at the vis lab, pursuing his interest in filmmaking by learning to script and code camera movements. “The procedural mindset of coding lends itself well to the visual arts,” he added.

Read the full story on this project, and related workshops and events leading up to the performance, here.