Alumnae Return to Campus to Celebrate 50 Years of Coeducation 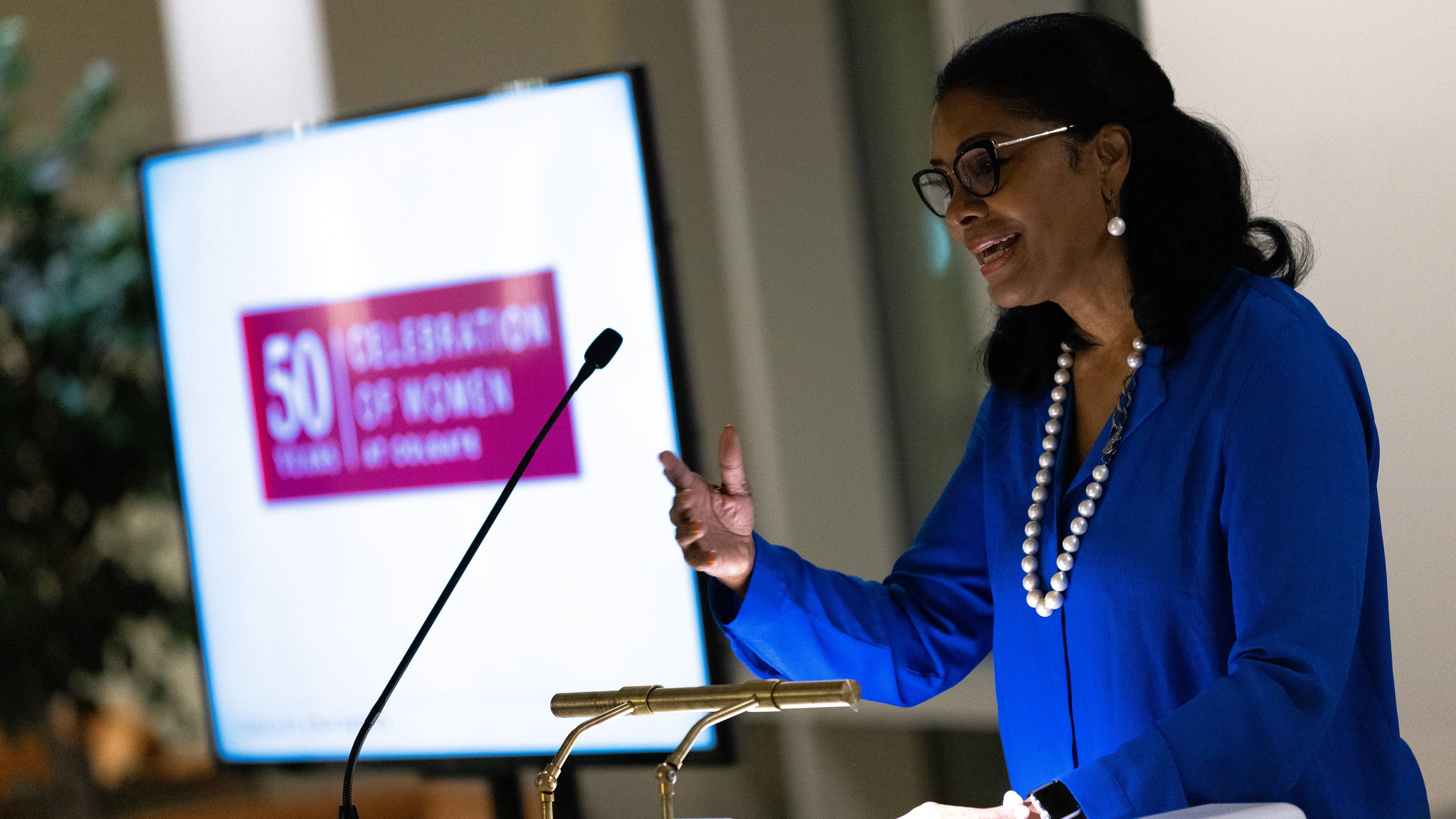 Delivering the keynote speech at Colgate University’s 50th anniversary of coeducation dinner, Patricia Hayling Price ’76 remembered a call she received on a snowy Sunday night during her senior year.

On the other end was then-president Thomas Bartlett. He wanted her to apply to be a Watson Fellow, but the application needed to be postmarked by the following day. Racing to meet Bartlett, Hayling Price picked up the application and spent the remainder of the evening filling it out. And as quickly as the opportunity to apply for one of the nation’s most prestigious postgraduate fellowships materialized, Hayling Price found herself studying intercultural dance choreography in London.

“It boosted my confidence,” says Hayling Price, who pursued a successful career as an actress and a model before serving as a global executive at IBM for over two decades. Hayling Price's passion for business strategy and professional development later inspired her to launch her consultancy, LiveWorkStrategize, in 2006. “Coursework fueled my intellect, but these [kinds of] experiences fueled my courage, my confidence, and my identity.”

While uniquely hers, Hayling Price’s story was just one of countless others shared as the University welcomed alumnae back to campus Nov. 12–13 to honor the 50th anniversary of coeducation. A part of a year-long celebration, the weekend’s events included panels, discussions, and sessions that proudly acknowledged the contributions of the institution’s first alumnae while also exploring the role women will continue to have in shaping and preparing the University for its third century.

“We couldn’t celebrate on campus last year, and had a series of wonderful, monthly virtual events,” says Liz Buchbinder ’77, chair of the Women’s Leadership Council. “But we really felt like this was a milestone we needed to celebrate on campus, in person.”

Alumni were invited to sit in on Friday morning classes to kick off the celebration. Afterward, members of Colgate’s faculty hosted a panel to discuss a range of topics that included the role of faculty-student collaboration in building understanding; the revised core curriculum; sustainability; and diversity, equity, and inclusion.

The faculty panel discussion helped set up the afternoon’s events, which included interactive tours related to Colgate’s Third-Century Plan. During the presentations, alumni had the option to learn more about plans for a fifth commons and Fox Hall; the expansion of Olin Hall to accommodate the Robert H.N. Ho Mind, Brain, Behavior Initiative; the renovation of Reid Athletic Center; or the revitalization of Middle Campus as part of the arts, creativity, and innovation initiative.

“Having reached the 50-year milestone of coeducation, it’s important to celebrate where we’ve been and what we’ve come through,” says Buchbinder. “But, with the Third-Century Plan in the works, being able to look forward to what the future looks like for coeducation at Colgate has been really inspiring.”

A member of Colgate’s first fully coeducational cohort, Ciccone was one of 132 women from the Class of 1974 who joined 82 female transfer students already on campus, and helped usher the University into a new era. Today, women make up more than half of the student body.

“You have to have different voices at the table, and hopefully that’s a blueprint for how we move forward,” says Ciccone. “For this institution to be truly coeducational, at some point, we won’t even pay attention to it because it’s so natural and there are women who are leaders — all through the University [administration] and the student body.

This spring, the celebration of women at Colgate continues with an event that features the Kerschner Family Series Global Leaders at Colgate. The weekend, planned for March 4–5, 2022, will also offer opportunities for students, faculty, and alumni to connect through dialogue and panel discussions.

Members of the coeducation planning group, Kathryn Roberts ’01 and Cynthia Perry ’74 joined fellow alumnae like Buchbinder and trustees Christine J. Chao ’86 and Theresa Donahue Egler ’77, P’07,’11 in the planning of both virtual and in-person coeducation celebrations throughout the past year.

“The great thing about the women at Colgate is that they are fierce, diverse, and passionate,” says Roberts. “Although we’ve all had different experiences here, those lessons and stories are important to share.”

This month’s coeducation celebration was cosponsored by the Women’s Leadership Council (WLC). Established in 2005, the WLC inspires philanthropy among Colgate women who want to make a transformational impact for current and future generations of students. Read more. 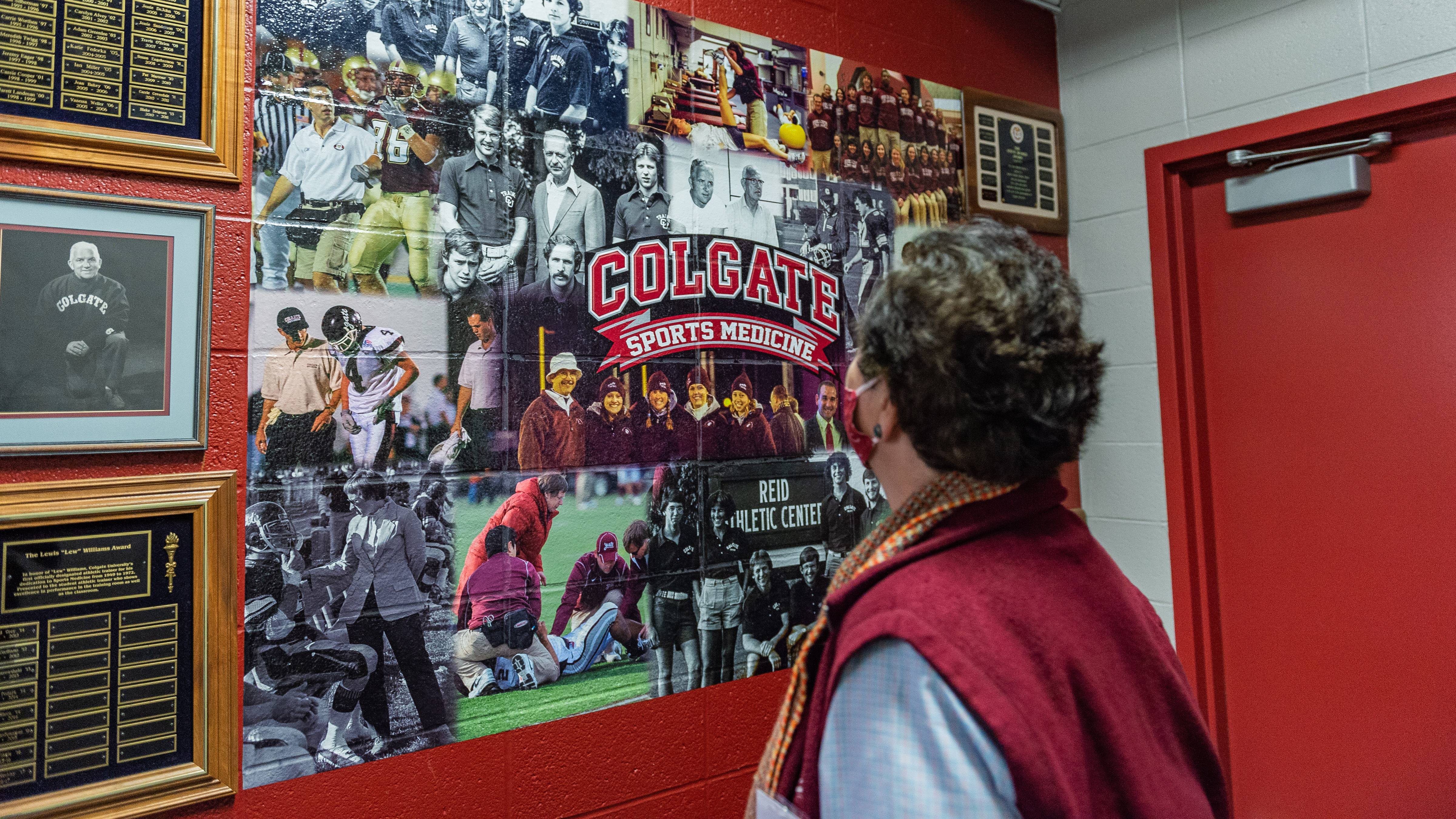 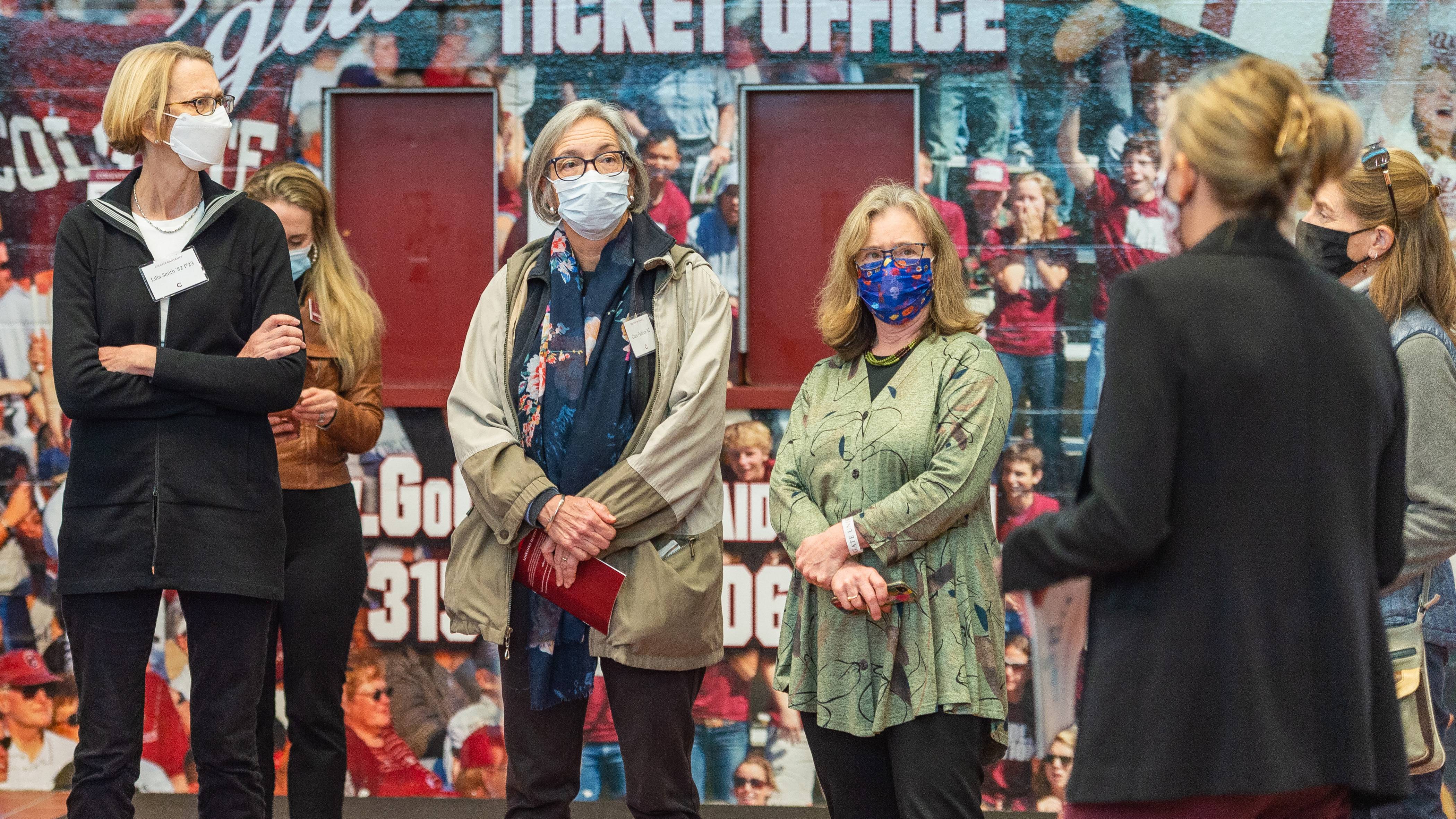 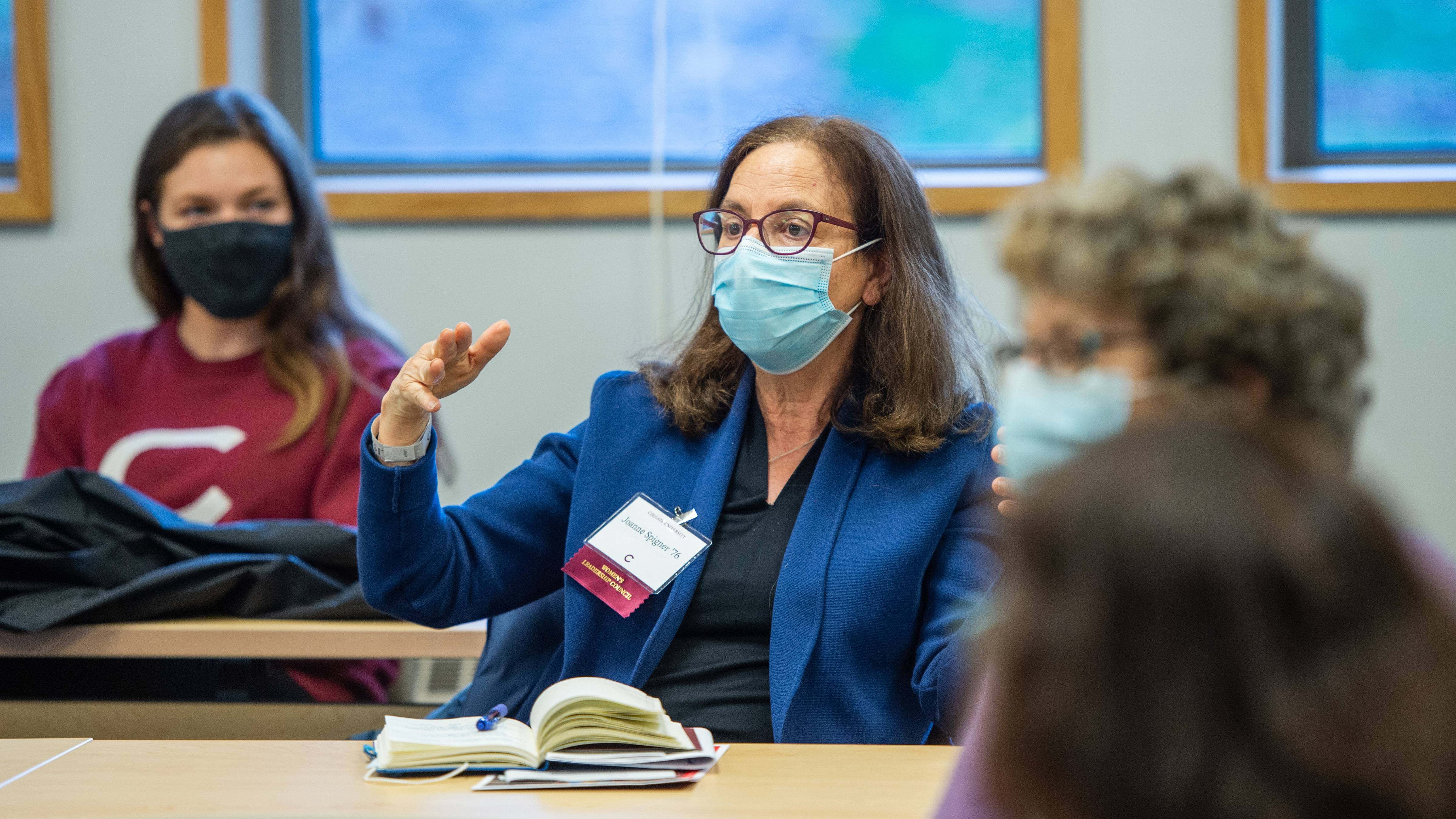 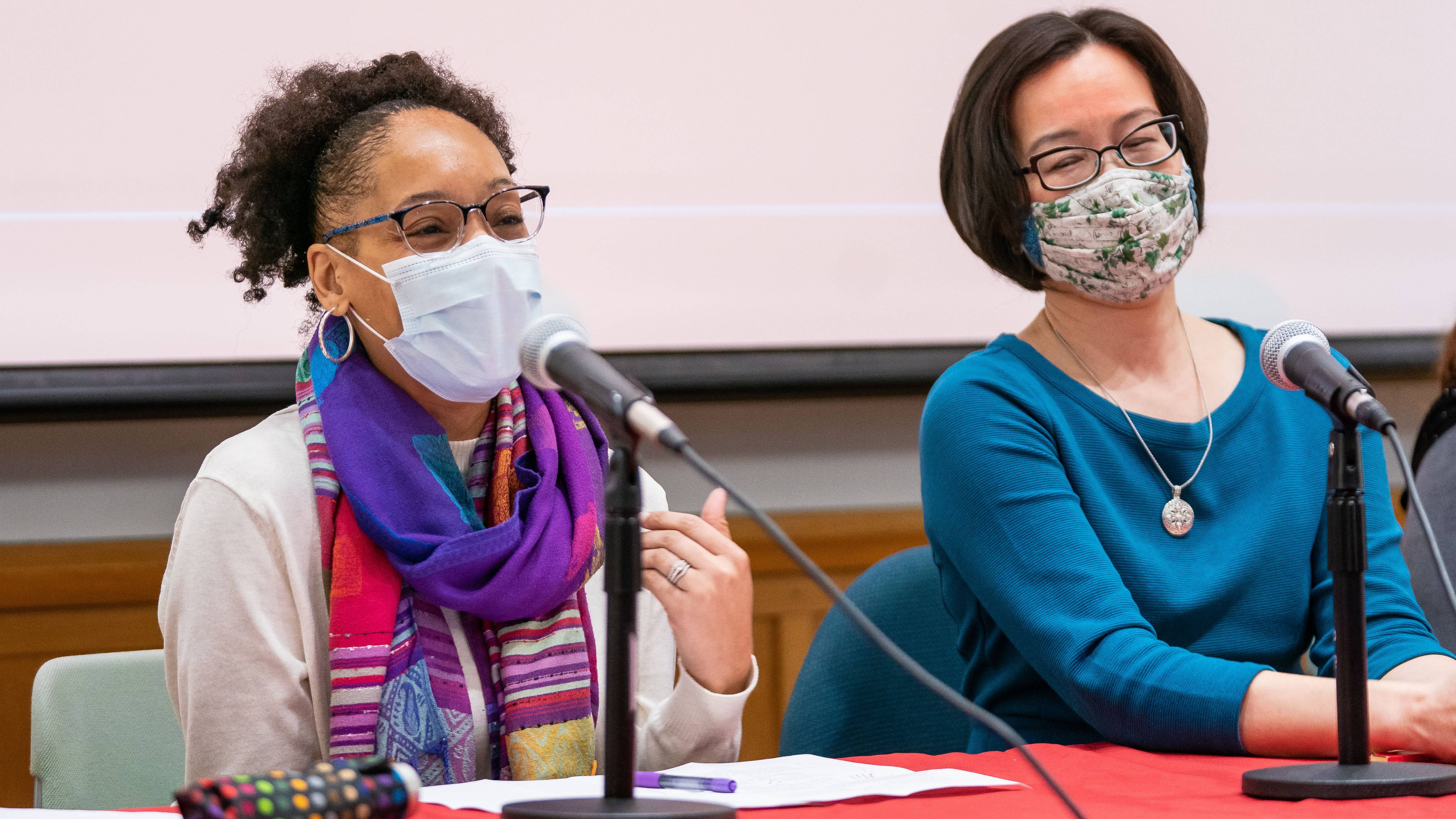 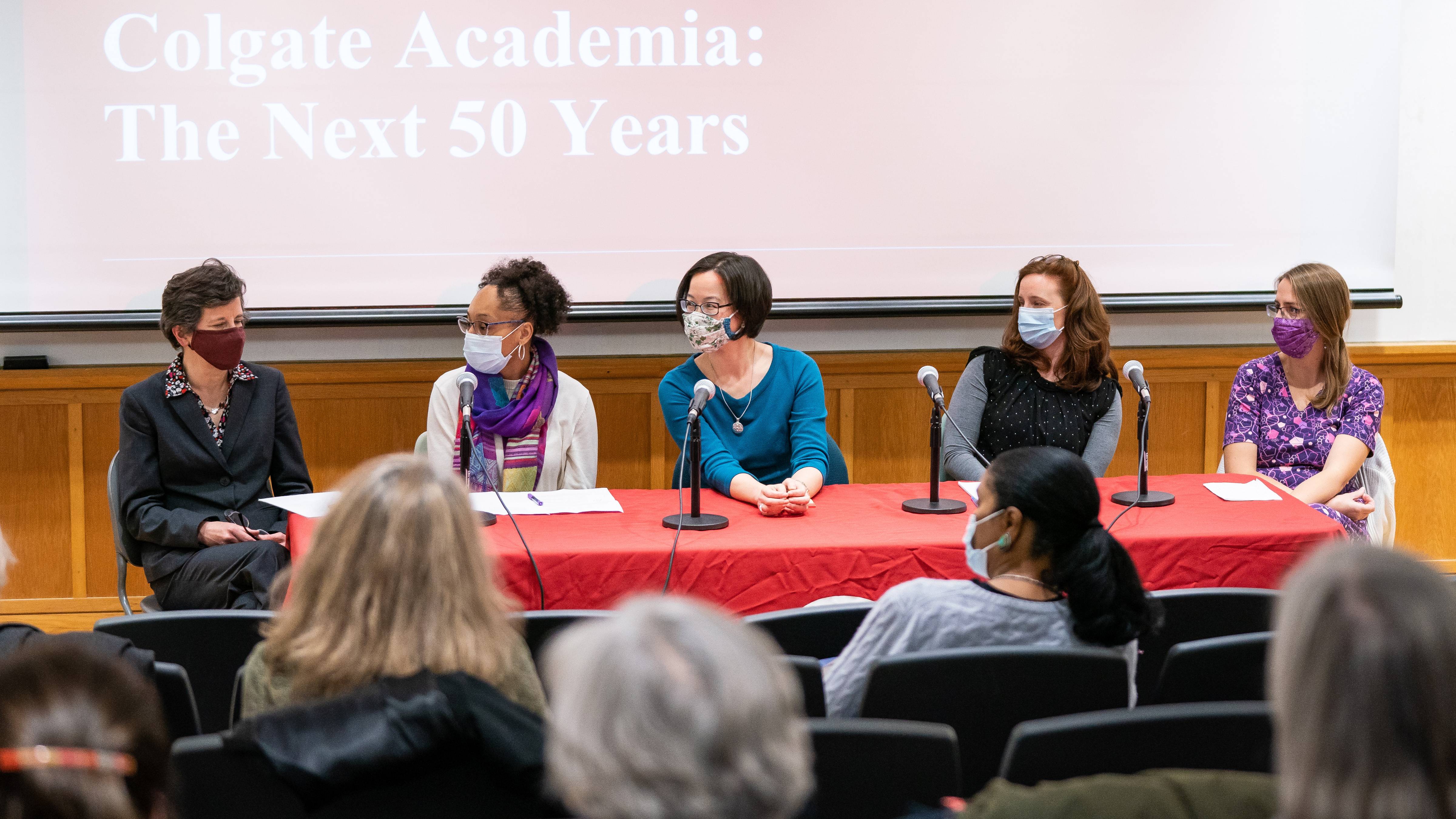 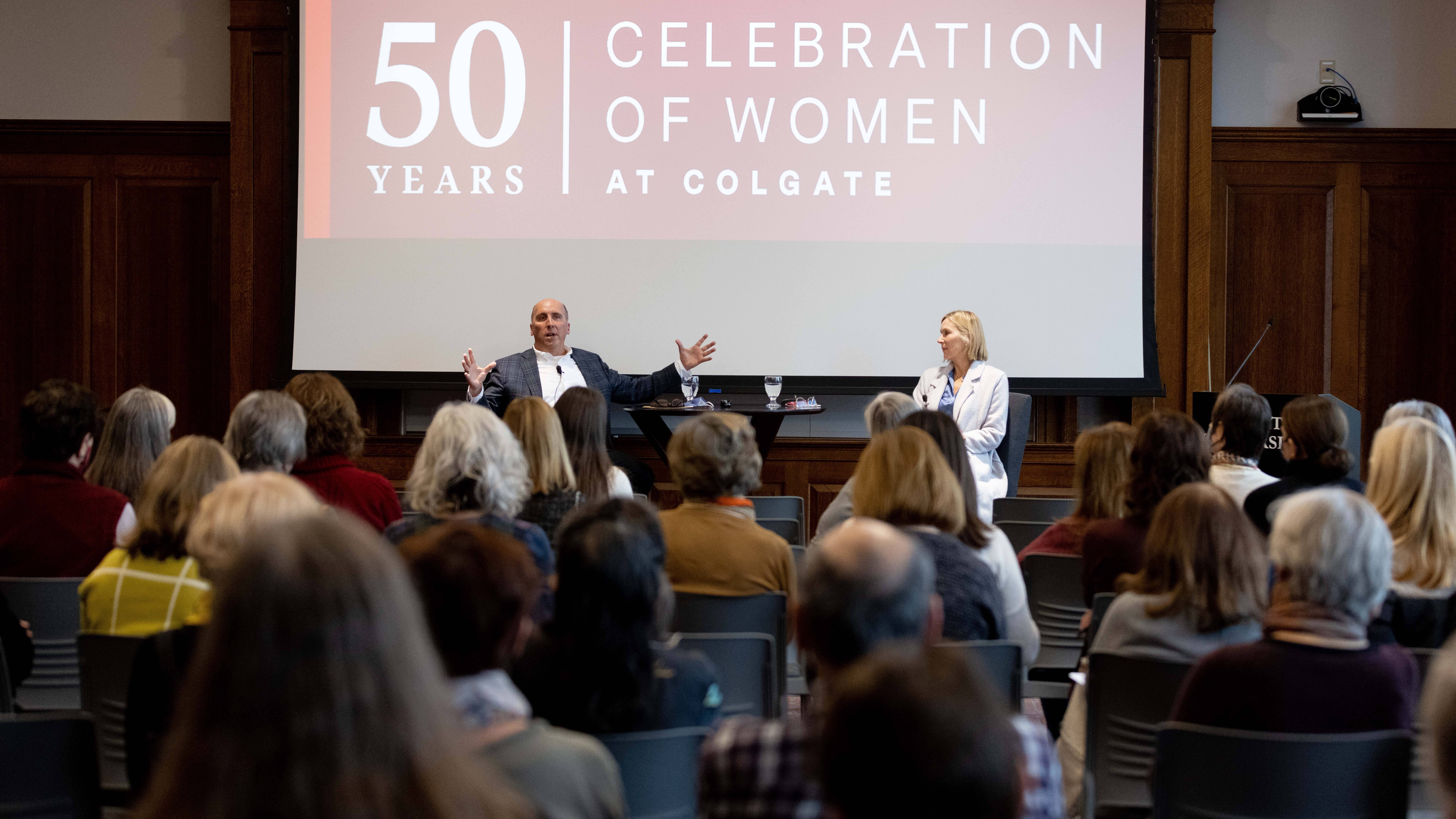 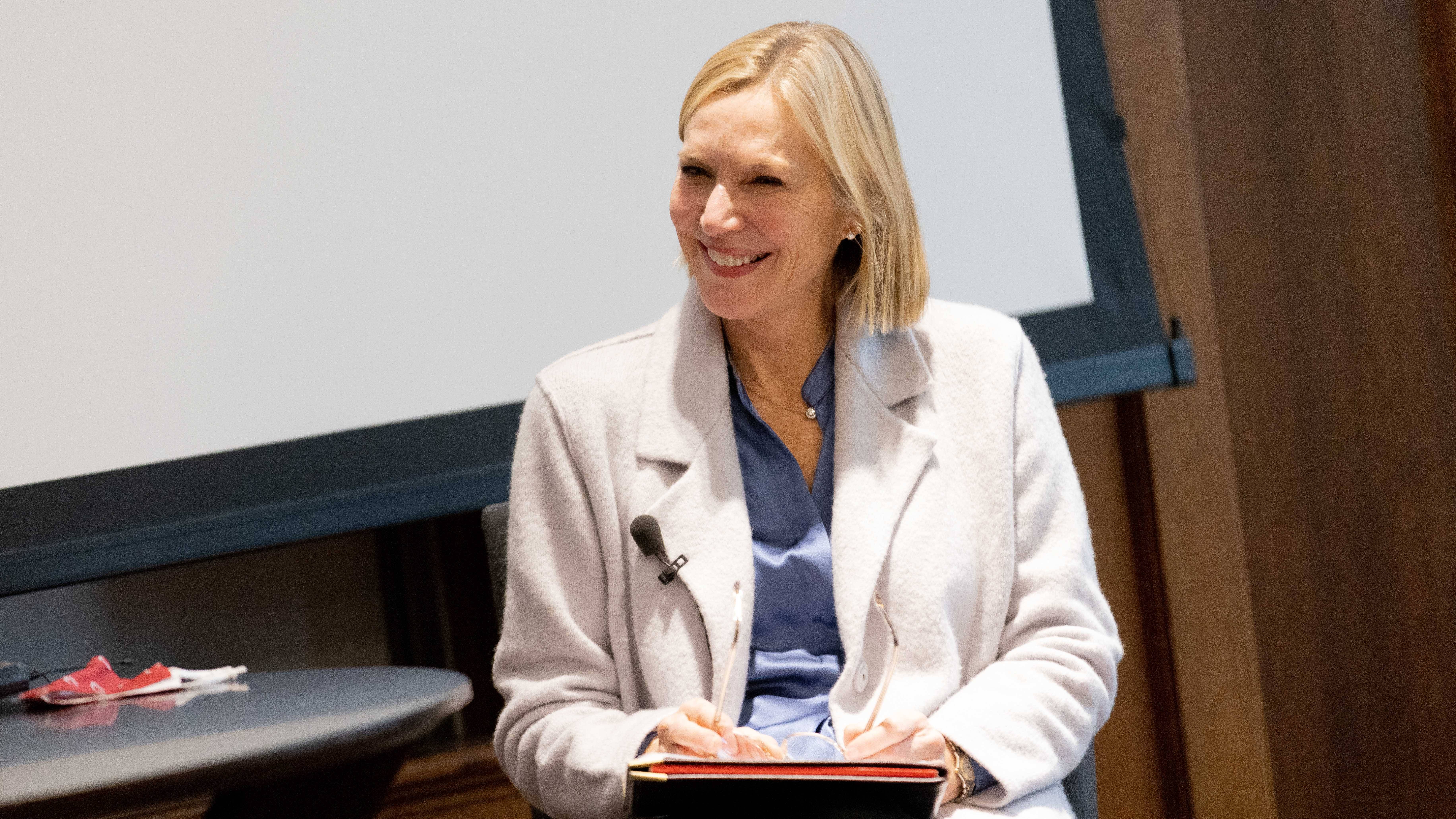 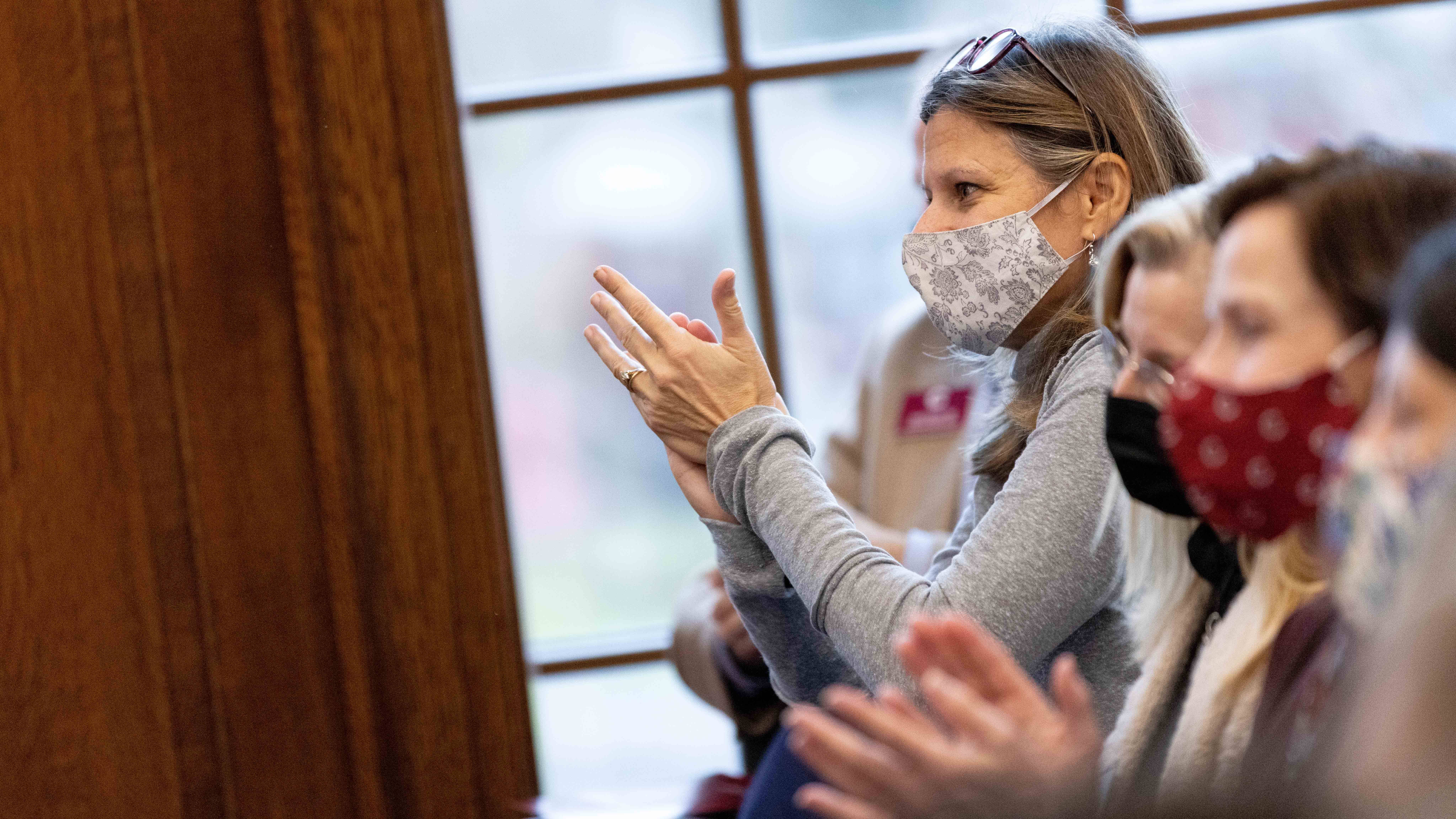 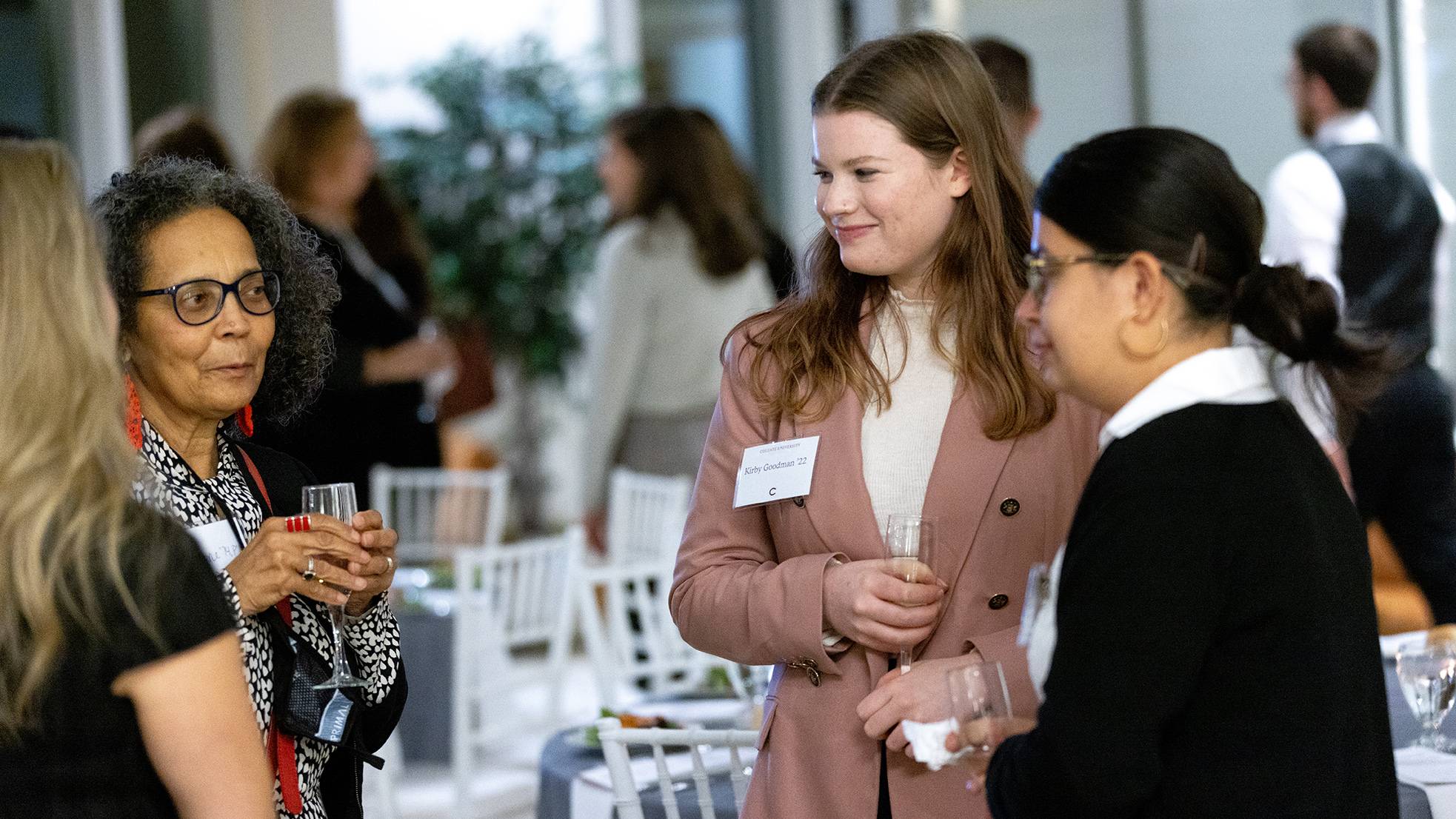 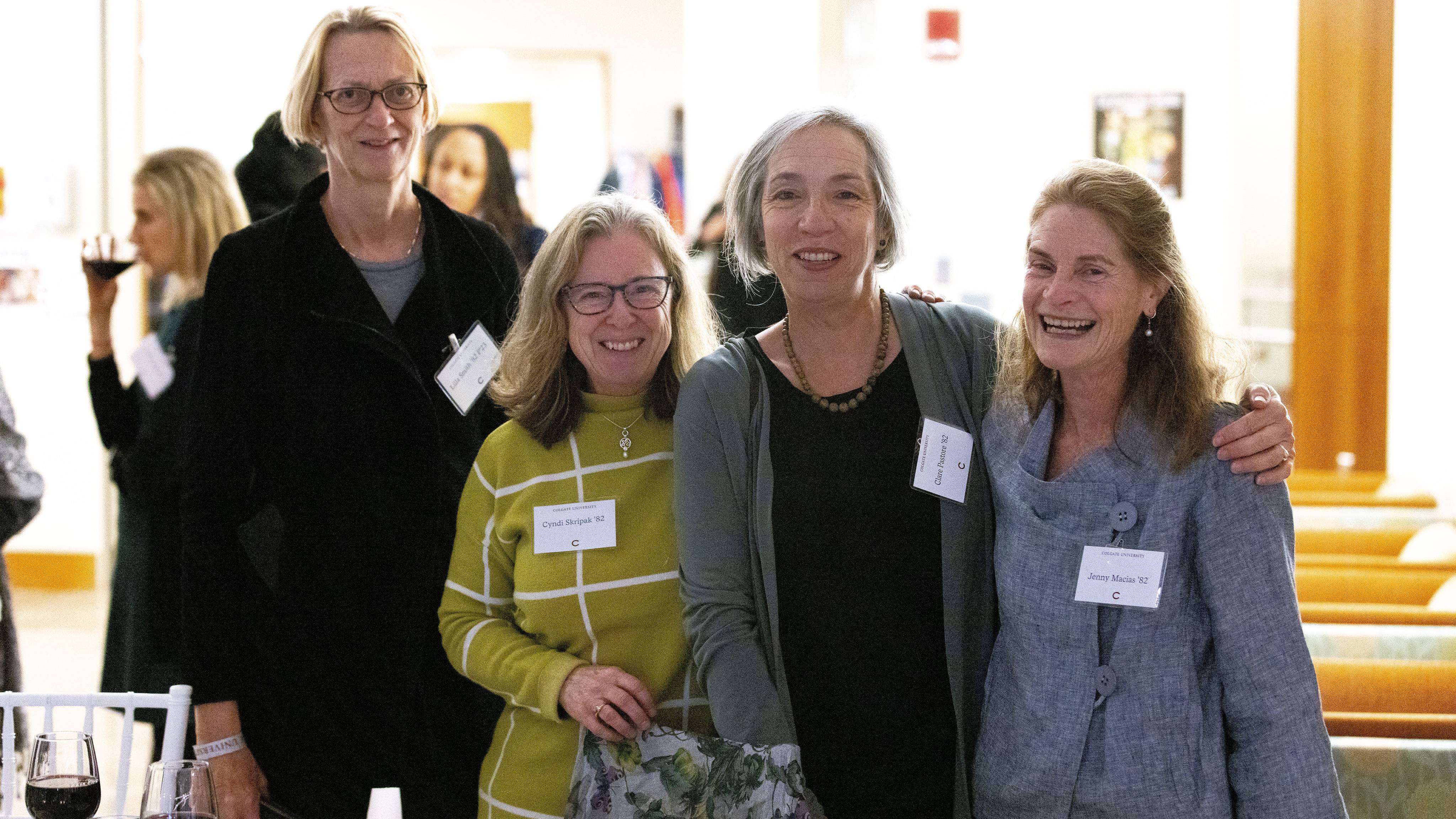