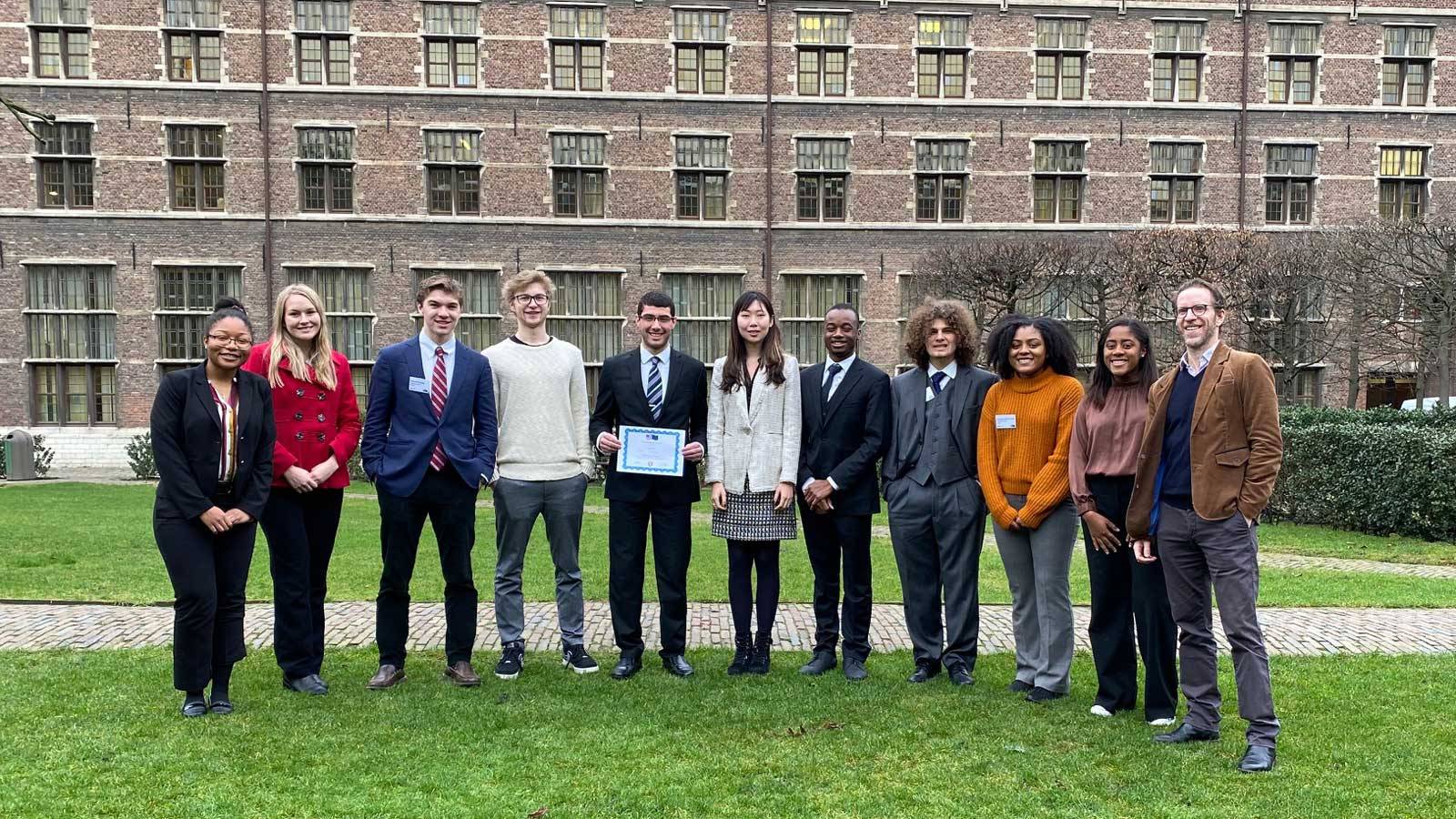 Tommy Vlattas ’21, the Russian ambassador to EuroSim 2020, keeps his friends close and his enemies closer.

January 6-9, Vlattas and nine other Colgate students traveled to Antwerp, Belgium, to attend the annual transatlantic conference that simulates European Union policy-making. At the 2020 conference, hosted by the University of Antwerp, delegates served in special roles, represented political parties, and formed coalitions. Debates at this year’s conference centered around sanctions on Russia and Iran.

Meanwhile, as the Russian ambassador, Vlattas had to think on his feet, taking every opportunity to seek out new alliances, receive invitations, and ensure that the Russian sanctions committee remained in gridlock. He even took to working through his coffee breaks to pursue further negotiations.

“The biggest challenge was stopping sanctions from being enacted,” Vlattas said. “While the national feelings towards Russia varied, many countries there came with the firm intention to implement Russian sanctions. I needed to find a way to promote Russian interests.”

Despite (or, perhaps, because of) these challenges, Vlattas was named Best Delegate in a Special Role. “I think my peers voted for me based on my tenacity and willingness to do whatever it took,” he said. “As the only one there from the Russian government, the pressure was on me to perform.”

At Colgate, Vlattas — a double major in economics and political science from Hillsborough, N.J. — serves as the secretary of Colgate Model United Nations. He has been interested in diplomacy for much of his life, participating in Model United Nations in high school, and even traveling internationally with the organization.

Vlattas has not always intended to study politics, however. “I found my political science inspiration at Colgate,” he remarked. He enjoys the general camaraderie of the political science department and has been particularly influenced by professors Luttig, Shain, Rutherford, and Hayes, as well as Ed Fogarty, associate professor of political science and director of the international relations program, who accompanied the delegation.

Now participating in the Washington, D.C., Study Group, Vlattas is further honing his political abilities. He reports that Washington, D.C., reminds him of the European Union and the coalitions that formed at EuroSim. “There is a lot of diplomacy in the air, along with a need for persuasion and compromise. The decisions made here in D.C. have far-reaching impacts, just like the decisions made in Brussels. Visiting government offices, think tanks, law firms, and lobbyists has given me a glimpse into the American governing system, which is interesting to compare to those of European nations.”

In the future, Vlattas hopes to go into banking or finance. His background in diplomatic arbitration and committee work, learned at EuroSim and Model United Nations, will come in handy. “I think those skills will improve my negotiation abilities and help me work with others in a diplomatic way to get things done.”