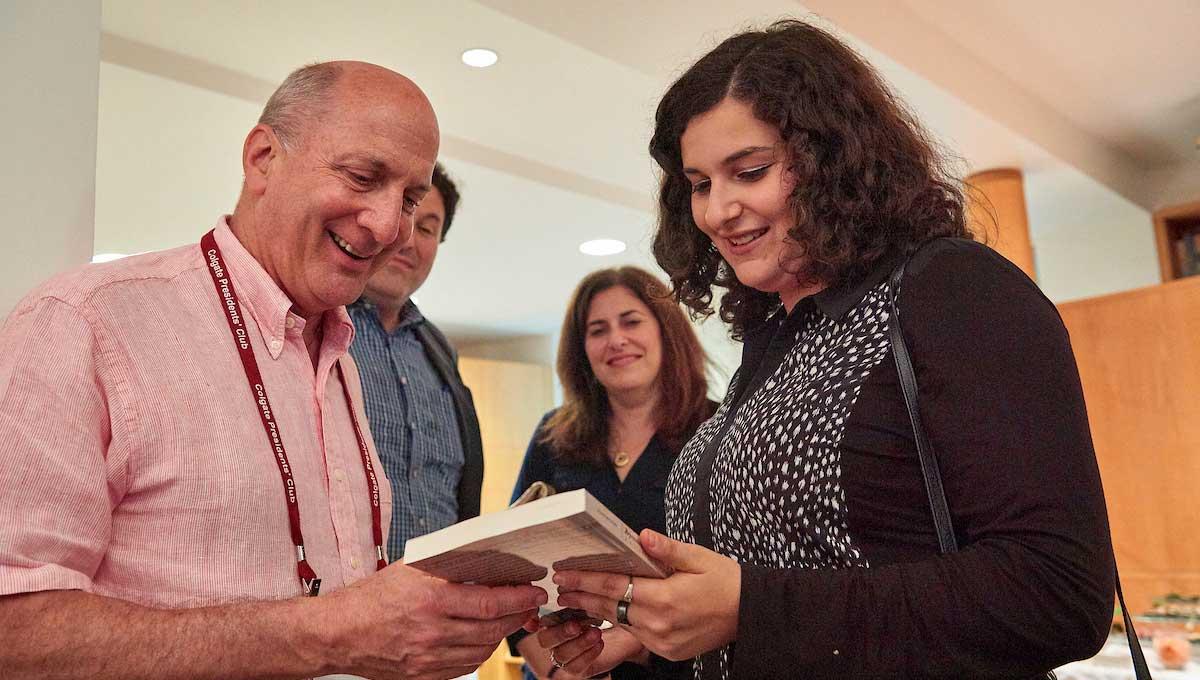 Emily Kahn ’19, one of the authors of Repression, Re-Invention, And Rugelach: A History Of Jews At Colgate, shows off a copy of the book at a recent Reunion event.

A new book exploring the history of Jewish life at Colgate is now available, and the work is more than a 25th anniversary tribute to Colgate’s Saperstein Jewish Center. It is an academic effort based on painstaking archival research and extensive interviews conducted by six students.

Written by Amy Balmuth ’17, Emily Kahn ’19, Cameron Pauly ’19, Kim Ravold ’19, Marit Vangrow ’18, Dominic Wilkins ’17, and edited by Professor of Jewish Studies and Russian and Eurasian Studies Alice Nakhimovsky, Repression, Re-Invention, And Rugelach: A History Of Jews At Colgate is the culmination of a JWST 411 seminar course.

Nakhimovsky, who penned the book’s introduction, wrote that the six student authors come from varied ethnic, religious, and academic backgrounds. Wilkins studied religion and geography, Balmuth was a history major and editor of the Maroon News, Vangrow studied religion and traveled to Jerusalem with Professor Lesleigh Cushing’s sophomore seminar, Pauly is an anthropology major and Jewish studies minor who is also pre-med, Ravold studies English and creative writing, and Kahn majors in history and minors in museum studies.

Nakhimovsky said she has nothing but praise for her six young colleagues, who produced a readable book of impressive academic quality.

“One of the best parts of the seminar is that everybody worked together and offered ideas for sources and approaches,” she said. “That’s often a goal of classwork, but I never saw it achieved so seamlessly.”

Each student authored a chapter of the book, and Noel Rubinton Jr., the son of the late Noel Rubinton ’43 — whose bequest funded the undertaking — provides an introduction. Rubinton Sr., one of a handful of Jews at Colgate in the ’40s, told his son that he had classmates who refused to live with him when he first came to campus. He later received apologies from some of the students for how they previously treated him.

“History matters, and this book is more proof of that,” Rubinton said at a recent reunion panel discussion about the book.

For Rabbi Dena Bodian, associate university chaplain and director of Jewish life, the collaboration between students, alumni, and faculty was a rare opportunity to gain a deeper understanding, “not only of our own institution, but of the broader American Jewish experience.”

Through their research, students helped illuminate a complex history of Jews at Colgate, unearthing some shameful moments, including admissions quotas that were in place and vigorously defended by the Colgate administration through the 1940s, as well as blatant fraternity discrimination.They also brought to light moments of tremendous success and triumph in the face of adversity.

“It was a true honor to get to tell their stories; both the ones that were positive, and also those who really struggled but persevered,” said Kahn. “Every single Jew on campus had a vastly different experience, but one constant was how that time shaped their Jewish identity… Whether this was a negative experience that caused people to advocate for stronger Jewish programs in their home communities, or it was a positive experience, like I’ve had, that allowed them to really discover their own Jewish identity — it’s something that students have carried with them throughout their lives.”

Ravold said her research and interviews showed how friendship and a shared belief system often built strong bonds between classmates, even in the face of adversity. She was even more surprised to find that, in stark contrast to the 1940s, self-identified Jewish students were the most satisfied student group according to a 2009 senior exit survey. That change became the foundation of her chapter.

For Wilkins, working on the book was a capstone moment in his senior year, and one that left an impression.

“The stories weren’t my own or my experiences, but they had been the experience of so many. What stood out to me was that these stories hadn’t been told, and they are so important to so many people,” Wilkins said.