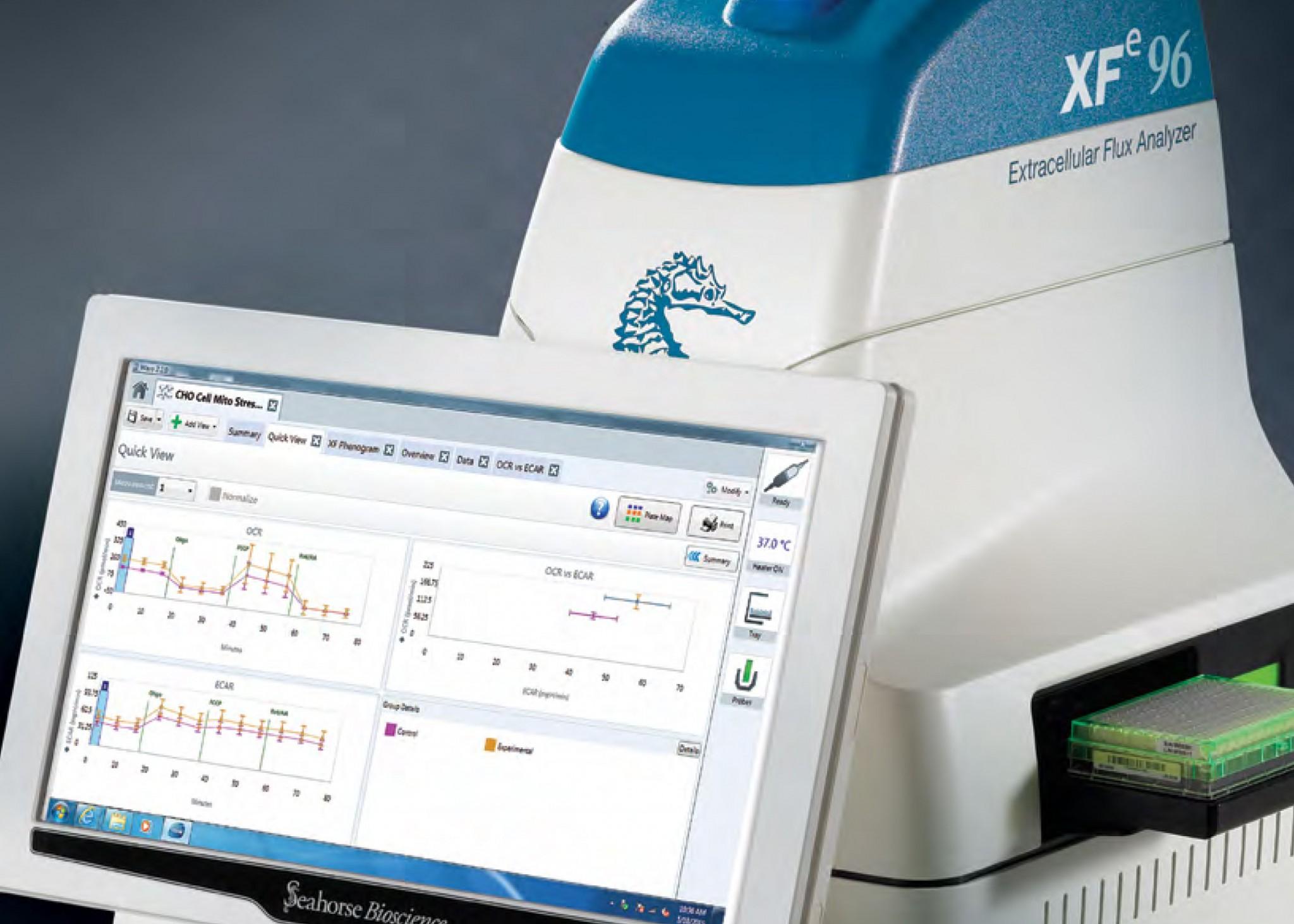 Dogs are funny. Every other animal lives longer as it increases in size — mice live a year or two at most, while elephants can live for 70. Not so with dogs, whose lifespans decrease as the breeds get larger. “A Chihuahua will live to 16 easily,” says Assistant Professor of Biology Ana Jimenez, “while a Great Dane is old at 6.” Jimenez has been working to unravel this mystery, and she now has access to a powerful new tool to do that: a Seahorse XFe 96 oxygen flux analyzer for integrative organismal and cellular biology. The Ferrari on Colgate’s benchtop

Colgate University recently acquired that mouthful of a machine through a $271,077 grant from the National Science Foundation (NSF). “It’s our Ferrari on a benchtop,” Jimenez says about the device’s high price tag, before adding: “I’d prefer the Seahorse.” That’s because the state-of-the-art equipment is able to do something no other tool in the lab can do: measure metabolism inside living cells in real time. “Metabolism is the underlying biochemical process that affects everything in the cell,” Jimenez says. “This is a tool that can bring that abstract concept to life.”

The Seahorse is one of two recent additions to Colgate’s equipment that juices up its already formidable capacity to carry on scientific research. “I’m not aware of any other undergraduate institution that has this equipment,” says Associate Professor of Biology Geoff Holm, who is using the Seahorse to investigate metabolism of viruses. “Resources like this are incredibly rare — and it’s even rarer for students to be using it to do research.” By learning experimentally rather than vicariously, students leave Colgate with all of the knowledge they need to perform high-level scientific experiments on their own.

The size of a proverbial breadbox, the Seahorse contains a plate with 96 wells in which a researcher can culture cells for an experiment. The machine can then perform an array of processes to investigate how cells use oxygen and sugars. Jimenez and her undergraduate students have already found some metabolic links to certain diseases that may affect large dogs more than smaller dogs. “Our hope is that we might find some way to alter these metabolic pathways, possibly by altering the composition of dog food, in order to make them live longer,” Jimenez says.

Holm is using the same machine to investigate how viruses alter the metabolism of human cells. “We know viruses use a whole lot of energy, but not much is known about how they alter cells to make that energy available,” he says. He is particularly interested in how viruses affect cancer cells and whether it might be possible to modify a virus to attack tumors by robbing them of oxygen while leaving healthy cells intact.

It’s not just Colgate faculty, however, who are investigating the role of metabolism in disease. Students in assistant biology professor Priscilla Van Wynsberghe’s intermediate genetics class are using the Seahorse to investigate rare genetic diseases using small worms called nematodes. Each team of students chooses a human disease and analyzes its effects in the worms, which they can plop directly inside the wells of the Seahorse to measure its metabolism. “Working in a cell culture may not allow you to understand what is happening in a whole organism,” says Van Wynsberghe, whose own research involves the study of the rare disease inherited by the children and grandchildren of mothers who took the morning-sickness drug DES.

The fact that students are able to do complex science on such a sophisticated piece of equipment ramps up the level of engagement in her class, Van Wynsberghe says. “I tell them we are going to play with a multi-hundred-thousand-dollar piece of equipment, and you can see how excited and motivated they are,” she says. And by using equipment most undergrads never touch, they are able to ask much more sophisticated questions than the typical student at their level. “It’s fantastic training in critical thinking,” Van Wynsberghe says. “They come out of Colgate already thinking like a grad student.”

One student who has already benefited from using the equipment is Joshua Winward ’18, who has been working with Jimenez on researching the metabolism of dogs, driving with her for two summers to the University of Rochester, two hours each way, to perform experiments. “Having a Seahorse on site will drastically reduce the amount of time running experiments as well as allowing us to run experiments more frequently,” he says. “Having this experience has given me an appreciation for just how much you can learn about any given organism at the cell level just by having access to the right equipment.”

Messing around with magnetism

Not only is Colgate adding new, sophisticated lab equipment to its stable, but it is also upgrading the equipment it has with new capabilities. This fall, the chemistry lab received a $345,783 grant from the NSF to improve its nuclear magnetic resonance (NMR) spectrometer, an instrument that uses the same technology as MRI machines to discover the structure of molecules. “When you do chemistry, you don’t know what you’ve made until you run a whole lot of tests on it,” says chemistry professor Ernie Nolen. “It’s not like in the kitchen where you can just taste it. It becomes a puzzle to solve for things you cannot see.” The NMR in action (Photo by Janna Minehart)

Common techniques such as mass spectrometry only tell researchers which atoms are present, but not how they are connected — a crucial element in dealing with complex organic molecules where the position of a hydrogen or carbon atom can dramatically affect how the molecule functions. In Nolen’s research designing and constructing molecules of biomedical interest, for instance, he needs to identify a galactose sugar called TN antigen, which differs from glucose by one hydrogen atom pointing in the opposite direction. “It’s a tiny change, but it makes a huge biological difference,” he says.

The NMR consists of a powerful magnet — actually, a ball of energized superconducting wire suspended in liquid helium — that can shift the orientation that a nucleus is spinning on its axis. By detecting these “spin flips,” researchers can construct a 3-D picture of a chemical compound in real time. The new upgrade for the system will dramatically increase its sensitivity, allowing researchers to not only tell how an atom is connected to its immediate neighbor, but also how it relates to other atoms in the compound. Chemistry professor Rick Geier is also using the device to characterize porphyrinoids, a versatile chemical structure in nature that does everything from binding oxygen in red blood cells and absorbing light in chlorophyll to catalyzing a range of biological reactions. Porphyrinoids can be used in a variety of applications, including harvesting energy in photovoltaic cells to improve solar energy, and destroying cancer cells by transferring energy from light to oxygen molecules. In order to achieve those goals, however, it’s necessary to discover efficient methods to synthesize these compounds — the focus of Geier’s research group. “There is a lot of trial and error in developing practical methods to create these compounds,” says Geier. “We are seeking to uncover general principles that make the trial and error more efficient. The NMR spectrometer is a key tool for quickly determining whether we are making the compounds that we think we are.”

Like the Seahorse, the NMR spectrometer is also heavily used by students in both classrooms and research. Associate Professor Anthony Chianese, who is the chemistry department chair, uses the device in his organic chemistry lab, allowing more than 200 students per year to analyze samples. “They can immediately identify whether their experiments formed what they expected them to form,” he says.

One of Chianese’s students, Linh Le ’18, is currently using the equipment in his lab to analyze reactions to create intricate catalysts called ruthenium pincer complexes. “As an undergraduate, I feel that it is a privilege to have access to this modern equipment, which is widely used nowadays in both industry and research labs,” says Le, who is in the process of applying to PhD programs in chemistry. “Consequently, I am more prepared as I embark on my career.”

By learning experimentally rather than vicariously, students leave Colgate with all of the knowledge they need to perform high-level scientific experiments on their own. “We can do real science,” says Nolen. “We are not just saying ‘here is an example of what you would do when you go to graduate school.’ We are actually doing it here.”

This material is based upon work supported by the National Science Foundation under Grant Nos. 1725841 and 1726308