Socrates returns to life in the Ho Tung Visualization Lab 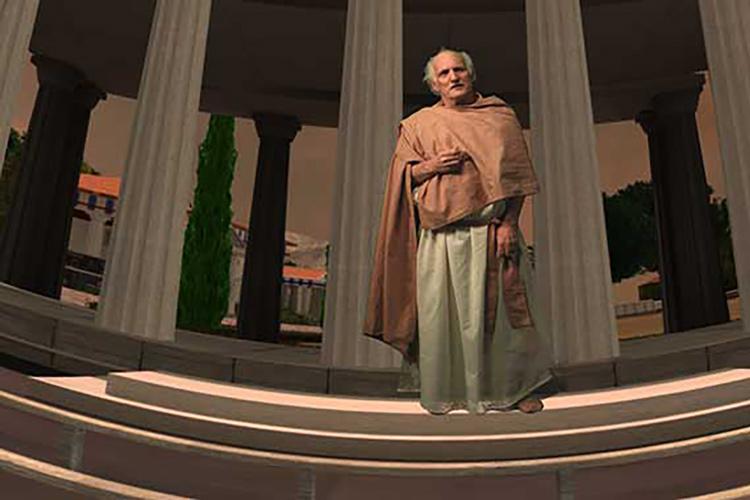 Some say that the death of a great philosopher in Colgate’s Ho Tung Visualization Lab on October 27 was a miscarriage of justice and a stain on Athenian democracy. Socrates’ suicide, reenacted on the Vis Lab’s domed screen by actor H.C. Selkirk, didn’t require the response of law enforcement, but it did draw a crowd of spectators.

Students dressed in the garb of ancient Greece ushered faculty, staff, and friends into the intimate theater on the Robert H.N. Ho Science Center’s fourth floor. The lights went down, and the audience was transported through time into the agora in Athens, digitally reconstructed during the past two years by Colgate University and Hamilton Central School students under the guidance of Vis Lab director Joseph Eakin.

The film, Socrates on Death Row, used live action and a voiceover by Professor Alan Cooper to tell the tale of one of Athens’ most famous citizens, who was a font of notable quotes, a deep thinker who never published. We know of Socrates’ philosophy and his eponymous method of Q&A through the writings of Plato and Xenophon. Relying on those texts, Professor Robert Garland drafted the script for the show, which he considers a prequel of sorts to his Murder on the Ides. Through Garland’s words, we hear of Socrates’ service in the Athenian army during the Peloponnesian War against the hated Spartans and their allies. We learn of his sympathy for nobles who would rather take government out of the hands of the hoi polloi. Socrates goes on trial for corrupting the youth and defends himself against his prosecutors, mostly by asking questions that make them look like fools. When the jury finds him guilty, he baits them into ordering his execution in an effort to prove the folly of their judicial system. We stand beside Socrates as he downs his dram of hemlock and sighs his last breath.

Thanks to Garland, Eakin, and their collaborators, the death of a classical hero demonstrates the life and vitality of Colgate’s interdisciplinary approach to liberal arts education.

“This is a new way of bringing the classics to a wider audience,” Garland said. “It’s not remote. In the Vis Lab, you see this great thing above you, and it really pulls you into it. I want to show that classics is exciting, gripping, and that it can engage you.”

Joe Eakin and his student staff are no strangers to the silver-blue screen. They have produced four full-length planetarium shows as well as flybys of the Grand Canyon, Rome, Mexico’s Teotihuacan, and other locales. They have supported courses in sociology and anthropology, Native American studies, geography, geology, biology, chemistry, art and art history, physics, and astronomy. Under a blanket of virtual stars, classes travel back in time and view the constellations as they would have appeared over now-ancient civilizations.

“It brings these cultures to life when you can show what it was really like to be there,” Eakin said. “It’s great to read the stories, but when we can combine the words with the visual elements, we bring the humanities into the digital world — we give students a completely new perspective and hopefully a better understanding of the content.”

The Ho Tung Visualization Lab, made possible by a gift from Robert Ho ’56, offers a variety of shows open to the public. Visit their website for details.