Repatriation and Reconciliation: The Carrolup Artworks Return to Colgate 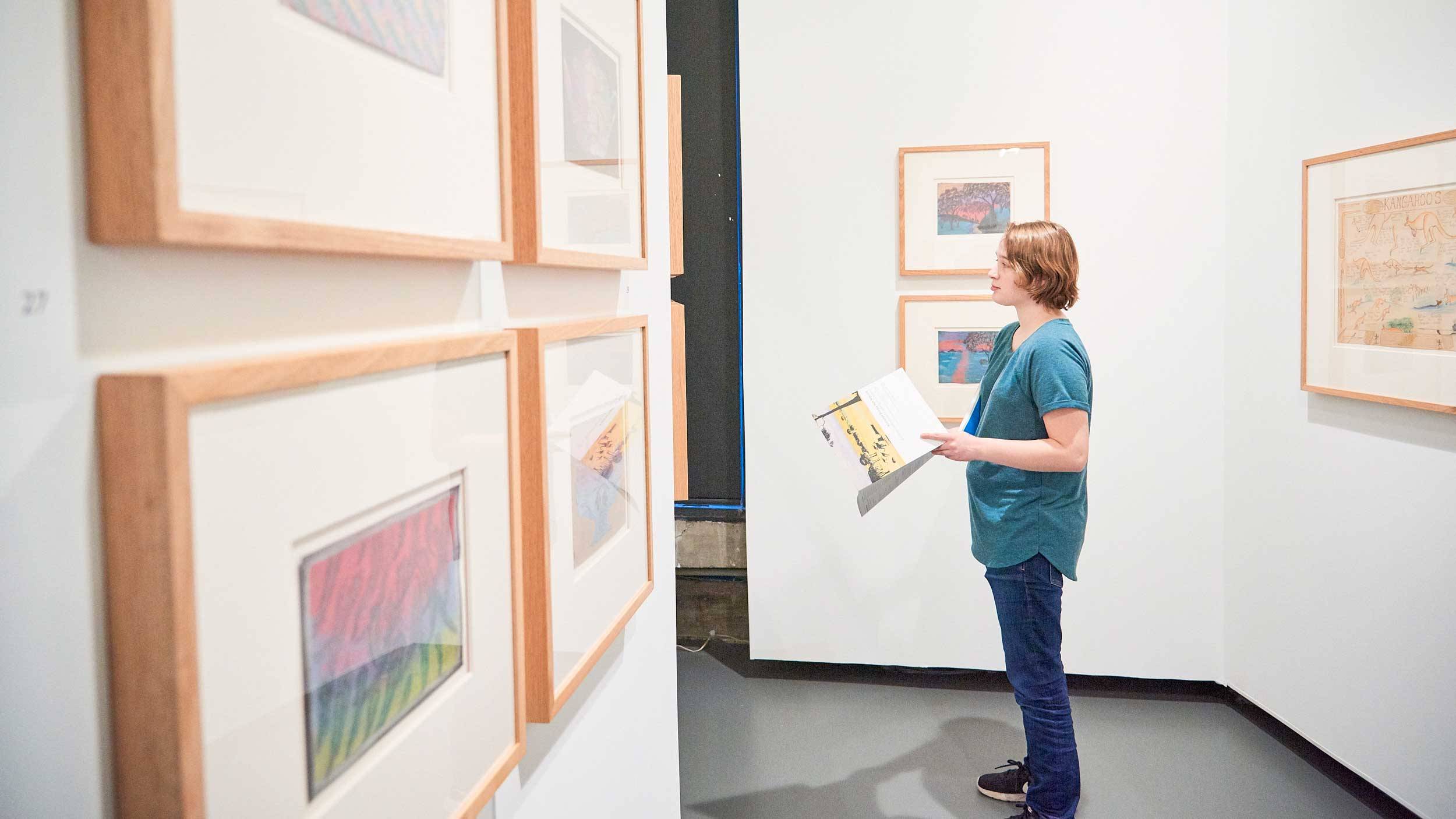 These works were selected from the Herbert Mayer Collection of Carrolup Artworks. Colgate repatriated the works in 2013 to the Noongar people of Australia, where they are cared for by the John Curtin Gallery at Curtin University in tandem with the Carrolup Elders Reference Group.

The paintings and drawings were created by Aboriginal children removed from their families and placed in the Carrolup Native Settlement, an institution administered by the government of Western Australia. These children, and others like them who were taken to similar institutions, both public and private, became known as the Stolen Generations.

The Herbert Mayer Collection has become an intrinsic part of our work for reconciliation and healing.

This spring, Director of University Museums Anja Chávez oversaw the temporary return of the artworks to Colgate.

“This might be one of our most important moments,” said President Brian W. Casey. “Universities must have an ethical component or they shouldn’t be operating.”

The artworks were discovered in the Picker collection in 2004. Professor of Geography and Environmental Studies Ellen Percy Kraly worked with colleagues at Colgate in the repatriation of the works and in developing Colgate’s ongoing relationship with the Noongar people and with Curtin University, bringing Colgate students to the southwest of Western Australia for the last 13 years.

The journey of the artworks from Carrolup many years ago from their home to Colgate and back home is truly an amazing story and all Noongars and Colgate University can take pride in what these children did and what they have done for us today.

A symposium, Museums and Reconciliation, began the festivities. Presenter Margo Smith, director and curator of the Kluge-Ruhe Aboriginal Art Collection at the University of Virginia, spoke on the need for museums to create relationships with the people whose art they represent through truth telling and deep listening. “Giving back is only part of it,” she said. “Museums need to develop ongoing conversations and relationships to serve the people whose art and culture they represent.”

Elizabeth Marlowe, associate professor of art and art history and director of the museum studies program, and Christy DeLair, curator of the Longyear Museum of Anthropology, also took part in the symposium. Marlowe discussed the ways museums address the legacies of racism and colonialism present in statues in their collections. “Objects on display have multiple meanings,” she said. “The first step towards reconciliation can be inviting members of Indigenous communities into the conversation.”

The Noongar children of Carrolup continue to bring us together. Their artwork has followed a spiritual geography over many decades.

DeLair gave an impassioned presentation on the need for museums to interrogate their practices in the process of decolonization and to develop relationships with Indigenous communities. “Decolonization is a process, not a goal,” she said.

The ongoing relationships developed between Colgate, Curtin, and the Noongar people were apparent at the exhibition’s opening reception.

Tony Hansen, member of the Carrolup Elders Reference Group and co-convener of the Bringing Them Home Committee, said, “I’ll cherish this moment for the rest of my life, to know that I’ve come to the former resting place of the artworks, knowing and walking around the college and embracing every moment of it and connecting the spirits and taking the spirits home with us.”

Oneida Nation Bear Clan Representative Brian Patterson welcomed the Australian visitors with a traditional blessing, thus ensuring the beginning of even more connections and relationship building between Colgate, Curtin, the Noongar people, and the local Indigenous community upon whose land Colgate is situated.

The Herbert Mayer Collection of Carrolup Artworks is an important part of Australia’s cultural heritage. It sheds light on one of the darkest periods in the nation’s colonial history, the Stolen Generations.