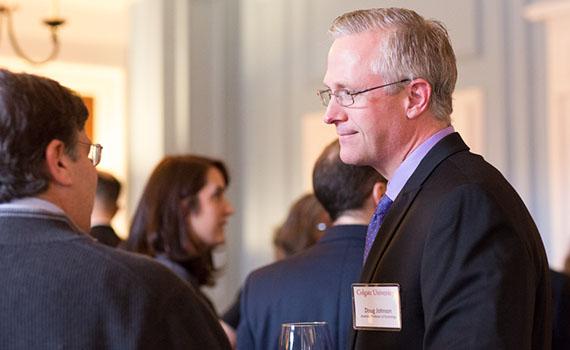 Douglas Johnson, associate professor of psychology and recipient of the 2014 Jerome Balmuth Award for Teaching and Student Engagement

Established through a gift from Mark Siegel ’73, the Balmuth Award recognizes a faculty member whose teaching is “distinctively successful and transformative.” It is named in honor of the legendary Jerry Balmuth, Harry Emerson Fosdick Professor of philosophy and religion emeritus.

“Doug Johnson is highly respected by the faculty, both in and out of the classroom,” said Provost and Dean of the Faculty Douglas Hicks in his role as master of ceremonies. “His remarkable enthusiasm is contagious.”

Balmuth, in his remarks, invoked Plato’s most famous metaphor as he reminded the audience that, “The world without the teacher is like a black and bewildering cave with humans confined helplessly to a panorama of shadowy illusion, shared ignorance, and mutual misunderstanding and mistrust,” he said. “It is a teacher’s vocation to show humans a way out.”

During his time at Colgate, Johnson has taken that job to heart even as he has taught his students about the workings of the mind — “helping them,” said Balmuth, “to escape the platonic alternative of intellectual darkness and ignorance.”

Responding to Balmuth’s praise, Johnson put the teaching award in context, saying “It would be impossible for a non-Colgate person to fully appreciate the honor it is to receive an award named for Professor Jerome Balmuth, an excellent educator dedicated to, and adept at, his craft. While the honor bestowed upon me this evening is powerful to me for many reasons, it is largely due to the teacher for whom the award is named.”

Johnson earned his BA from Washington University in St. Louis, and he received his MA and PhD from Johns Hopkins University. He joined Colgate’s Department of Psychology in 1996, and only five years later earned the Phi Eta Sigma “Professor of the Year” award.

Between 2004 and 2007, Johnson was chair of the scientific perspectives program. He served as associate dean of faculty from 2007 through 2010. Today, he is Colgate’s representative to the Patriot League Policy Committee, and this July he will take over as director of the Center for Learning, Teaching, and Research.

Johnson has shouldered all of these duties while teaching courses on human cognition, research methods, statistics, attention and memory, and more.

“There has not been a single class,” one student wrote in a testimonial, “in which Professor Johnson lacks the enthusiasm and pure joy for teaching that encourages and motivates his students to put in their best effort in the course.”