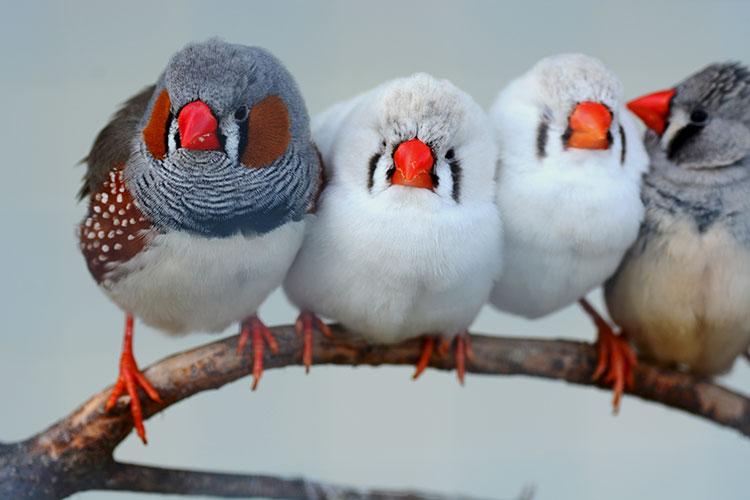 Colgate neuroscientist Wan-Chun Liu is using songbirds to understand better how the human brain learns to speak — and gain new insights into diseases such as autism disorder.

Professor Wan-Chun Liu’s lab is filled with the mellifluous tweets and squeaks of zebra finches, a small songbird native to Australia. The birds are highly social animals that teach their young to sing, much the same way that humans teach babies to talk.

“In both cases, they have to interact with adults,” explained Liu, an assistant professor of neuroscience who joined Colgate last fall. “If they don’t have this early exposure, they cannot learn as well.”

Liu has been examining how the songbirds develop that vocalization in the brain and, in the process, trying to develop a better understanding of neurodegenerative disorders that affect speech in humans — diseases like Huntington’s, Parkinson’s, and Alzheimer’s. To further his research, Liu received a $155,000 grant this spring from the Picker Interdisciplinary Science Institute, which supports collaborations between Colgate faculty and outside researchers. The grant will allow him to use the relatively new technique of optigenetics, which gives scientists the power to manipulate genes using light, in order to study the effects of social learning on the brain.

In studies that he began at the Rockefeller Institute, Liu has focused on a part of the brain called the basal ganglia, which is present in both songbirds and humans. During the critical period when the birds are learning their songs, several genes are highly expressed in this area, meaning that their DNA is actively involved in making proteins. “It is also the first area to have damage from neurons dying when someone has Huntington’s disease,” Liu said.

By inserting a human gene for Huntington’s into zebra finch embryos, he has been able to create a strain of finches afflicted with the disease to understand how those genes affect brains. Relying on that new information, it may be possible to manipulate those genes, using therapies such as the genome-editing tool CRISPR to suppress the disease. “If we can use these types of genetic tools to silence the genes before they start to express and transcribe to RNA, maybe we can prevent the disorder from happening,” he said.

Recently, Liu has been looking at the connection between the basal ganglia and autism, a disease that is associated not only with learning difficulties, but also problems in social interaction. He is working on creating a new strain of transgenic zebra finches afflicted with the disease, which he will then study using optigenetic techniques.

By inserting light-sensitive genes (opsins) into the finches, Liu and his collaborator, molecular biologist Atsushi Miyanohara (University of San Diego), hope to make the birds start or stop singing by shining light on them. Working with neuroscientist Dimitriy Aronov (Columbia), Liu will build a computer system to automatically track the interactions between different family members of finches, testing the effects of social interaction on the development of the vocal learning and autism-like disorder.

“If you have autistic birds that have difficulty interacting with other birds and imitating song from the father tutor, what will happen in their brains?” he asked. “The overall goal is to better understand how genetics and the environment can affect vocal and other forms of social learning.”