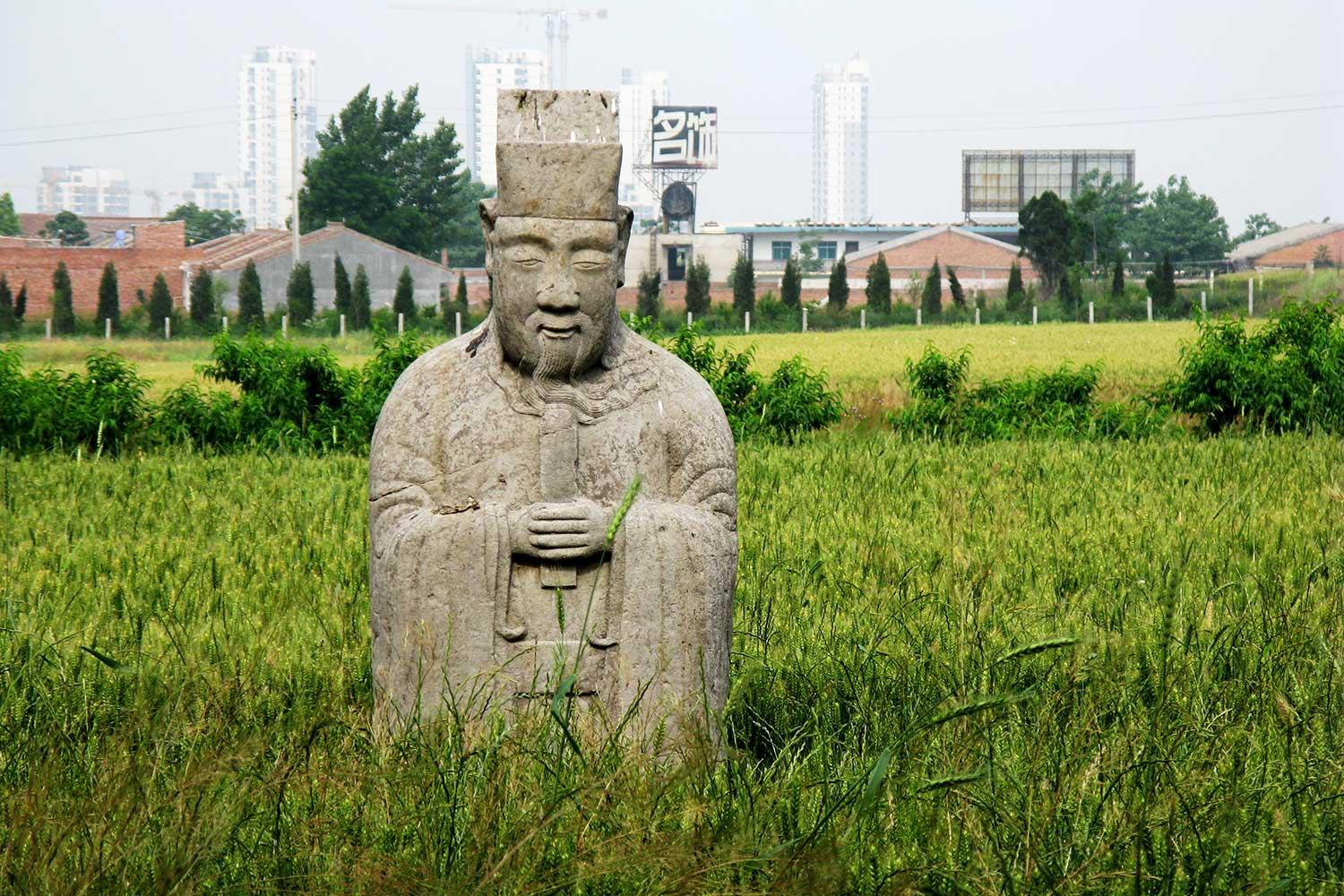 A half-buried funerary figurine from the tomb of the Ming Prince of Qin, outside today’s Xi’an, the provincial seat of Shaanxi Province (Photo by David Robinson)

What happens when empires fall apart?

The rise of China’s Ming dynasty in the 14th century is a study in the answer to this particular question.

According to David Robinson, Robert H.N. Ho Professor in Asian studies and professor of history, “You pursue one question and it leads to another — it has a kind of forward momentum.”

The pursuit of answers to these many questions has led Robinson to his sixth book on East Asian history, In the Shadow of the Mongol Empire: Early Ming China and Eurasia, forthcoming from Cambridge University Press.

The study of China under the Ming Dynasty (1368–1644) and its relations with the Mongols has interested Robinson ever since he studied in Beijing and Taipei as an undergraduate.

The Ming dynasty was founded in 1368 by Zhu Yuanzhang, the child of peasant farmers. An illiterate beggar and monk for much of his youth, Zhu Yuanzhang eventually joined an insurgent army and became a commander fighting the Mongol-led Yuan dynasty. When that insurgent group collapsed, he became the leader of a split-off faction — the Ming.

The Ming would go on to conquer, unify, and govern China with absolute power for almost three centuries.

“The Ming gathered information about neighboring countries’ experiences with the Mongols,” Robinson said. “The founding Ming emperor used that intelligence to tailor his message.”

This flies in the face of common wisdom that insists that the early Ming dynasty was xenophobic and strictly limited contact with the outside world.

“When the Ming Emperor wrote to the Japanese to demand recognition, he used the memory of the Mongols to further his own diplomatic message. He takes this idea of the Mongols having failed to invade Japan twice and tells them, ‘If you don’t recognize me, I’m going to succeed where the Mongols failed.’”

Robinson hopes that readers of his book will take away three essential points that are raised by his research.

First, the Ming Court tailored its approach to diplomacy in light of neighbors’ memory of Mongol rule. Second, it was headed by an emperor who lacked any ties to Genghis Khan, his descendants, or their empire — he was the ultimate outsider in a time when the Mongols were the gold standard of political legitimacy.

“The third point is that, if you don’t contextualize the Ming dynasty from a Eurasian standpoint, you’re not going to appreciate it,” Robinson said. “In a lot of ways, the history of China is the history of Eurasia. If you want to understand global history, you must understand Chinese history.”