Professor and chaplain Coleman Brown, a trusted moral voice on campus, passes away 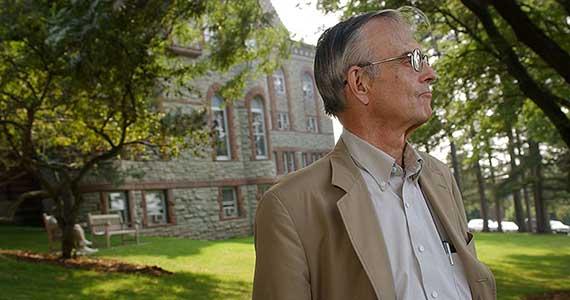 Coleman Barr Brown, professor of philosophy and religion and university chaplain, emeritus, died December 14 at the age of 80.

Brown joined the Colgate faculty in 1970 as an instructor in philosophy and religion.  He also served as university chaplain from 1974 to 1989, when he turned to full-time teaching, and assumed the responsibilities of his new appointment as associate professor for the study of education and ethics.
Brown’s special interests included social ethics, theology, American religion, personal counseling methods and theory, and preaching. An inspiring teacher and mentor, he was awarded the Phi Eta Sigma teaching award (1992), the Colgate Alumni Corporation Distinguished Teaching Award (1993), and the Colgate prize for inspirational teaching (1996).

According to Provost and Dean of the Faculty Douglas Hicks, Brown’s dedication to justice and compassion made him a trusted moral voice on campus.

During 1976-77 he served as acting dean of students. He chaired Colgate’s diversity committee from 1988-90. And from 1993-96 he served as chair of the department of philosophy and religion. As one interview described his ministry, teaching, and leadership, he embodied “humility and resoluteness, tolerance and conviction, condemnation of evil and compassion.”

In Chicago, he worked tirelessly in major civil rights campaigns, including the Chicago Freedom Movement, a tenant action collaboration with the Southern Christian Leadership Conference, and “Clergy and Concerned Laymen,” a movement protesting the Vietnam War.

Throughout his long career, Brown remained committed to ministry and teaching, social and racial justice.

Brown fully retired from Colgate in 1999.  He is survived by his wife, Irene H ‘11, their four children, Justin (and Sabine Tibbetts of Ipswich, Mass.), Susan Brown-Zimmerman (and Joel Zimmerman of Melrose, Mass.), Bradford (and Shannon of Charlotte, NC), and Joshua (and Zoe Richardson of Burlington, Vt.); and ten grandchildren. He is also survived by his brother, David Warfield Brown.