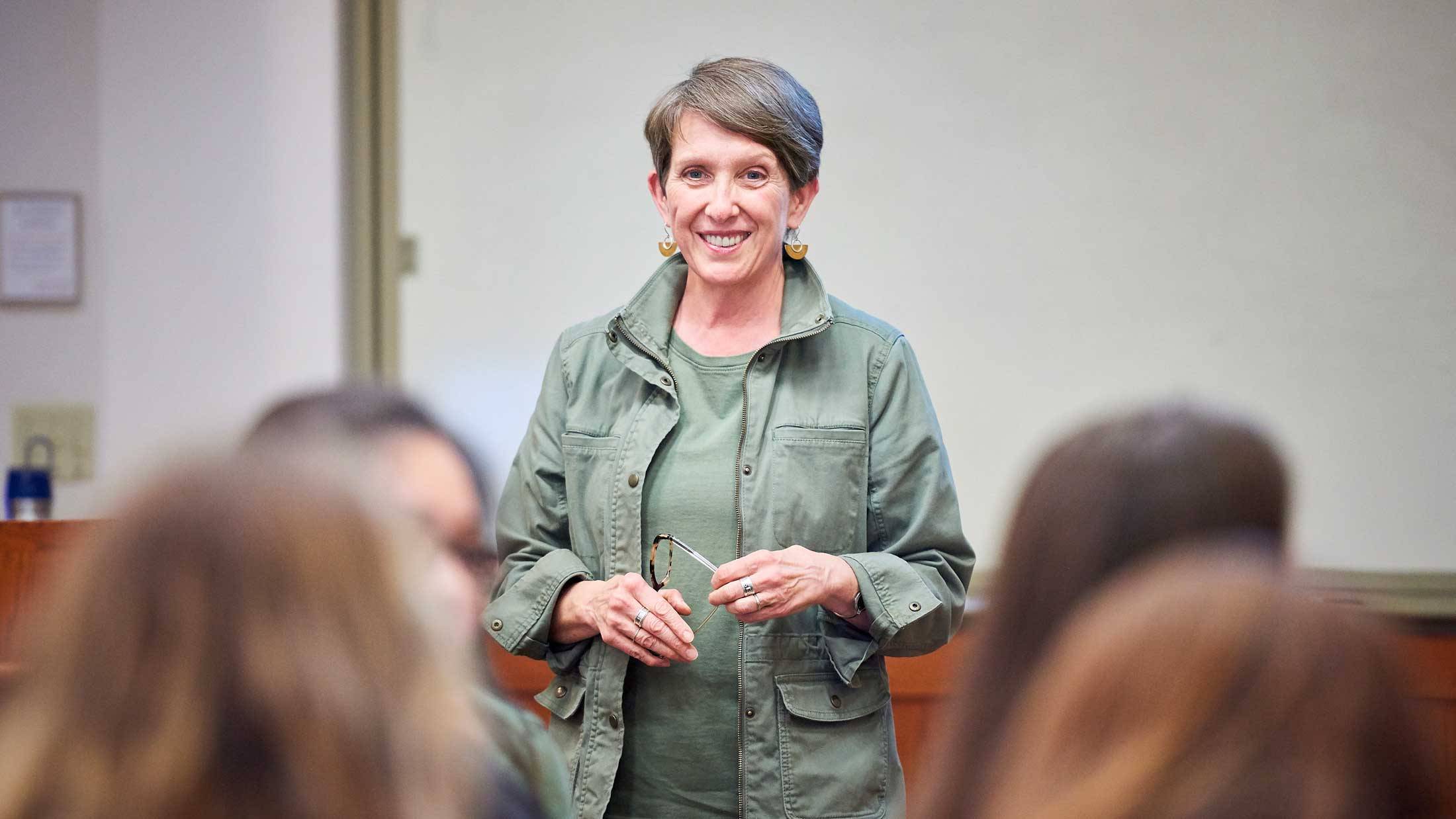 Nancy Ries, professor of anthropology and peace and conflict studies, is this year’s recipient of the Jerome Balmuth Award for Teaching.

The Balmuth Award, named for the late Jerry Balmuth, Harry Emerson Fosdick Professor of philosophy and religion emeritus, was endowed by Mark Siegel ’73 in 2010 to honor University faculty members whose teaching is “distinctively successful and transformative.”

Ries joined the Colgate faculty in 1994. During her tenure, she has served as division director for University Studies, chair of the Department of Sociology and Anthropology, director of the Peace and Conflict Studies Program, chair of the Off-Campus Study Committee, and in both elected and appointed positions on many other University committees. The most recent Liberal Arts Core Curriculum revision was launched under her leadership.

Within the Division of University Studies and core, Ries is a regular contributor to the Communities and Identities and Global Engagements components, as well as to the First-Year Seminar Program. Last year, she organized and moderated a faculty panel that addressed the nature of hate groups: their tactics, their targets, and the growing threats they pose.

A widely cited scholar of political culture in Russia from the 1980s to the present, Ries has been instrumental in developing the field of post-Soviet studies. She was a co-founder of Soyuz: The Post-Communist Cultural Studies Interest Group and co-editor of Cornell University Press’ prize-winning “Culture and Society after Socialism” series. In 2016, “The Broken Nuclear Taboo” appeared in the Leviathan Journal.

Ries has taught a multitude of courses within sociology and anthropology, peace and conflict studies, Russian and Eurasian studies, and the core curriculum. These courses include Practices of Peace and Conflict, Weapons and War, Social Theory — Everyday Life, and Core Russia. Her students across the generations have gone on to work as anthropology professors, political scientists, U.S. Department of Defense staffers, and nonprofit founders.

In nominating Ries for the Balmuth award, one student stated, “Professor Ries truly taught me how to believe in myself academically; provided students with a deep, heartfelt, and transformational understanding of the course materials; and fostered a learning environment where students felt important, safe, and challenged.”

Another added, “One thing that has always stood out to me about Professor Ries is the way in which she engages with her scholarship: She writes and teaches about genocide, corruption, fascism, famine, and seemingly unfathomable human atrocities. However, instead of becoming numb to the pain and suffering, Professor Ries sits with it and allows her students to do the same. She honors the lived experiences of countless victims who have been silenced and cannot tell their own stories. By passing these narratives on to her students, she serves as a voice for the voiceless.”

Importantly, “amidst the chaos of the pandemic,” wrote another student, “Professor Ries prioritized students’ mental and physical wellbeing and constantly looked for feedback for our online learning model.”