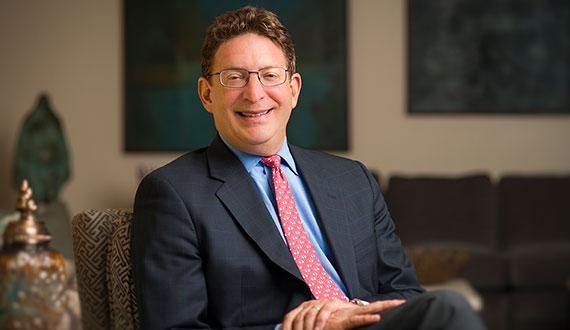 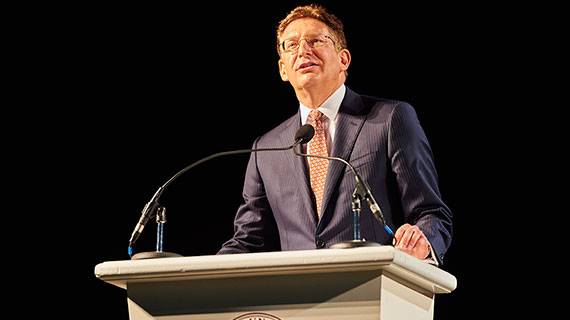 President Jeffrey Herbst will conclude his term in June 2015. (Photo by Andy Daddio)

Colgate University President Jeffrey Herbst today announced that he has decided not to seek renewal of his contract when it concludes on June 30, 2015. The 16th president of Colgate, Herbst has held the office since 2010. Professor of History Jill Harsin will serve as interim president during the search for Herbst’s successor.

“It has been an honor to serve as Colgate’s president during this complex and challenging time for American higher education,” said Herbst. “The liberal arts education Colgate offers is world class and I am proud of the work I have done here to ensure that Colgate remains excellent, relevant, and accessible to all. I am confident that my legacy has strengthened this university and has prepared it for the challenges ahead.”

Herbst said, “I decided that this is the right time to conclude my service to Colgate so that new leadership can be in place as the university prepares for the next fundraising campaign and the 2019 bicentennial celebration.”

In an e-mail to the Colgate community, Board of Trustees Chair Denis F. Cronin ’69, P’09, ’10 credited Herbst with helping the university complete its historic $480 million Passion for the Climb fundraising campaign.

Cronin noted that, in a transformational effort to build the university’s resources for students with financial need, Herbst extended that goal by raising $54 million in the last two years of the campaign. These efforts, Cronin said, have “contributed to Colgate becoming an academically stronger and more diverse community, with the Class of 2018 having the best academic profile of any Colgate class, and the most diverse demographic profile in Colgate’s history.”

Over the past five years, Herbst led the development of the university-wide strategic plan, Living the Liberal Arts in Our Third Century, which will guide Colgate’s future by fostering curricular and pedagogical innovations, creating residential learning communities, and further building and renovating Colgate’s physical campus. Since the plan’s adoption in January 2014, Herbst has led significant progress with these priorities, ensuring that the university will benefit from the momentum established in these areas for years to come.

Herbst is also credited with enhancing Colgate’s core academic program by increasing the size of the teaching faculty at a time when many universities were cutting back. He also championed Colgate’s internationalization and global initiatives by providing additional financial assistance to students studying abroad, expanding study abroad locations and options, and supporting the mission of the Lampert Institute for Civic and Global Affairs. His focus on entrepreneurship led to the creation of the Thought Into Action Entrepreneurship Institute, which has allowed students to pursue projects in the for-profit and nonprofit sectors while being mentored by alumni.

In addition, he led the effort to re-engineer the Office of Career Services to allow students to more fully participate in the 21st-century economy. He has also been a champion for the new athletic facility, which the university will begin building in early 2015, and the proposed world-class Center for Art and Culture, which the university plans to build in the coming years.

Cronin said, “The Board of Trustees appointed Jeff in part for his confidence that Colgate would thrive, and that the educational experience it provides would be even more relevant as the world becomes ever-more global, diverse, and interconnected. Indeed, his tenure has been marked by preparing Colgate for just such a future, and the board is grateful for his leadership. On behalf of my board colleagues and the entire Colgate community, I thank Jeff and his wife, Sharon Polansky, for their service to the university.” Harsin, who will become interim president on July 1, has been extensively involved in university governance since joining Colgate in 1982. She has served in several leadership positions, including department chair, social sciences division director, and interim provost and dean of the faculty.

“I’ve had the privilege of teaching Colgate students since arriving as an assistant professor in the history department 30 years ago,” said Harsin. “Colgate University is very dear to me — the passion for knowledge among my faculty colleagues and the students we teach is inspiring. I am humbled by the opportunity to serve as interim president and look forward to partnering with our leaders across the campus to build upon the university’s many successes.”

Provost and Dean of the Faculty Douglas A. Hicks said, “I am delighted to work with Jill in this capacity. She is a beloved teacher of generations of Colgate students and a highly respected colleague across campus. I admire her open, collaborative style and look forward to partnering with her to continue to move Colgate forward.”

The process to identify Colgate’s 17th president is beginning, with the goal to have a new president in place by July 1, 2016. Trustee and executive committee member Michael J. Herling ’79, P’08, ’10, ’12 will serve as chair of the search committee, which will be formed soon.

More information about the presidential transition will be available throughout the year at colgate.edu/presidentialtransition.