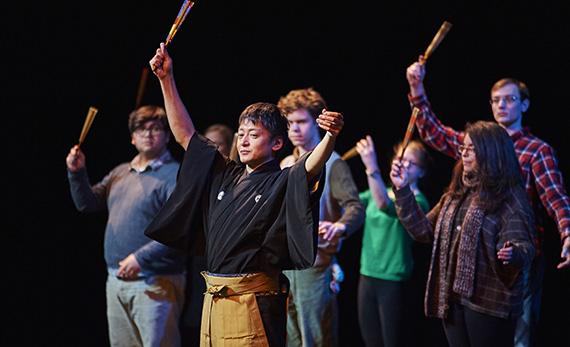 Yamai Tsunao leads a workshop in Noh theater, a Japanese drama that is one of the oldest theatrical forms in the world. Photo by Nick Gilbert

The curtain in Brehmer Theater opened to reveal Yamai Tsunao kneeling under a single spotlight on stage. He was dressed in a stiff, dark-colored Hakama costume, and his only prop was a brightly colored fan. He sang in a deep, full voice, moving through a series of deliberate, careful gestures.

The audience watched intently and there was an unexpected sensation of suspense in the dimly lit theater. The performer’s expression and poise made it clear that this type of performance required intense concentration and advanced memorization.

This rendering was part of an interactive performance about Noh theater, a Japanese drama that is one of the oldest theatrical forms in the world. Noh differs greatly from Western drama. The performers are storytellers who move on stage in a manner that suggests the essence of a story rather than plot, thus creating a style of theater that is inherently subtle.

For the February 10 performance, Brehmer Theater was nearly filled to capacity with students, faculty, and community members.

Tsunao, a distinguished Noh actor and a member of the Komparu School, has led many workshops. For him and many others, Noh is a family tradition passed down through different generations. Tsunao’s grandfather encouraged him to do his first performance at age 5, and his first major performance at age 12.

Tsunao’s Colgate performance was followed by an interactive workshop. First, audience members were given lyrics to Takasago, a celebratory song often performed at weddings. Through listening to Tsunao and reciting along with him, the audience learned to sing the song. Then, he invited people on stage to receive a basic dance lesson. Volunteers learned the slow, methodical actions that make up Noh theater, at times visibly struggling not to rush the movements.

“Trying Noh for myself was far more difficult than I expected,” said Monica Hoh ’16, a theater major. “It required a discipline of my entire body that I was not used to having. But due to that, I was far more aware of what my body was doing in each moment while onstage.”

The event was sponsored by the University Theater program and had additional support from the Fund for the Study of the Great Religions of the World, the Asian Studies Program, and Core Communities and Identities.