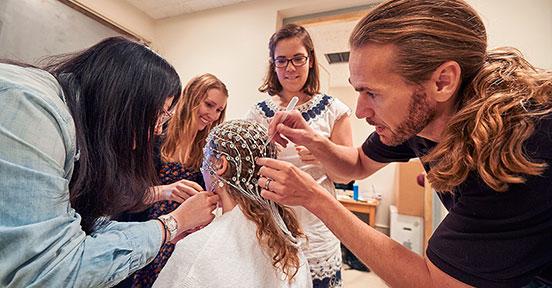 Professor Bruce Hansen works with students to prepare a test subject for a brain scan.

Colgate Associate Professor of Psychology and Neuroscience Bruce Hansen probably should have predicted his recent $600,000 James S. McDonnell Foundation award to fund the next six to eight years’ worth of lab work with dozens of students.

After all, his research could easily be considered mind reading.

One of just eight professors worldwide selected for the prestigious funding, Hansen is the first Colgate professor to receive the award. Established in 1950 to “improve the quality of life,” the James S. McDonnell Foundation supports high-level research and scholarship.

Part of Hansen’s work focuses on how the brain interprets everyday visual experiences, and more specifically, whether or not those interpretations can be understood externally through the study of brainwaves measured via electroencephalography (EEG).

“What I want to do is test for whether or not there are patterns of temporal brain responses that are indicative of a particular visual category,” Hansen said, explaining that the brain creates altogether different brainwave patterns when we look at an ocean, or a city, or a small college campus.

“If the brain is encoding this information in a somewhat faithful manner through temporal brainwave patterns, it could be decoded through machine learning classifiers,” he said.

The research is aimed at the development of an algorithm that could read EEG results, and then use those to tell if someone has been to a beach or a forest, and more importantly, how they chose to interact in that environment. Hansen said it’s the kind of scientific understanding of memory and perception that could lead to a better understanding of human cognition, and one day lead to the development of new treatments for brain trauma.

“Despite almost 100 years of technology-based research, we know very little about what exactly is going on in the brain,” Hansen said.

Spencer Kelly, Colgate professor of psychology and neuroscience, and chair of the psychology department, nominated Hansen for the award.

“One of the nomination guidelines for McDonnell funding asks, ‘Is this the kind of scientist you want training the next generation of scientists?’ The answer, most certainly in the case of Professor Hansen, was ‘Absolutely,’” Kelly said.