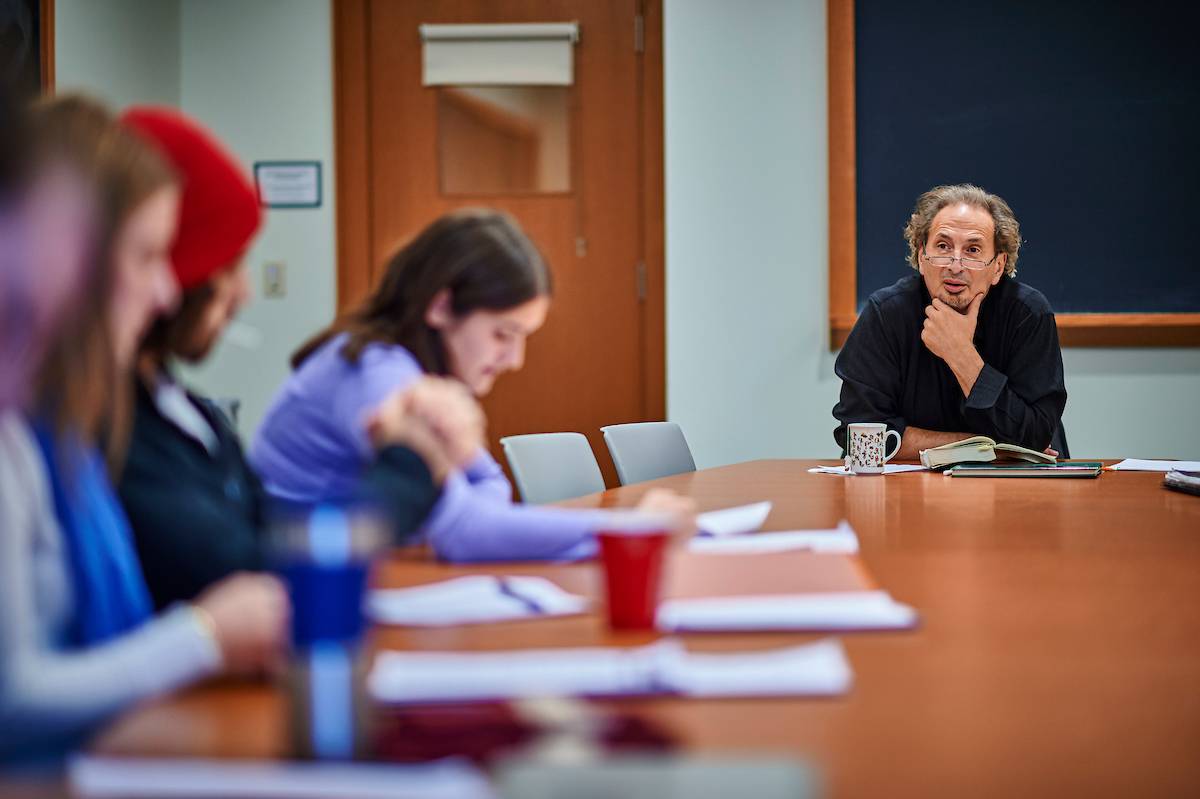 Professor Peter Balakian speaks with one of his classes in 2017.

President Joe Biden this week labeled the deaths of more than a million Armenians killed at the hands of Ottoman Turks in 1915 as genocide, a public recognition that Colgate English professor and Pulitzer Prize winner Peter Balakian has urged for decades.

“In his Saturday statement commemorating the slaughter of the Armenian people on their indigenous lands by the Ottoman Empire, President Biden said the word ‘genocide,’ marking a moment for which Armenian communities across the globe have been clamoring for decades,” Balakian wrote in a Washington Post editorial. “Until Biden, no American president has had the courage to use that term for fear of angering modern-day Turkish leaders and damaging relations with a powerful ally, even one with an abominable human rights record. But when Biden said, ‘We remember the lives of all those who died in the Ottoman-era Armenian genocide and recommit ourselves to preventing such an atrocity from ever again occurring,’ his words affirmed historical fact and embodied moral truth.”

Reporters from around the world have turned to Balakian for commentary about the Armenian genocide. In 1997, he joined NPR’s Terry Gross for a Fresh Air segment about his book Black Dog of Fate, which delves into his family connections to the atrocities committed by the Turks. Since then, he has appeared constantly in print, and on television, including a segment on 60 Minutes, as the issue of genocide recognition has been repeatedly debated.

“Biden's statement has universal meaning; it is a redress to all genocidaires and perpetrators who commit mass murder with impunity," Balakian said.

Balakian told NPR, “It’s significant, also, because the Turkish government’s campaign of denial has been so protracted, so extreme, so persistent over the course of so many decades, there has to be redress to this kind of consistent dishonesty and corruption.”

Balakian is the author of seven books of poems, including Ozone Journal, which won the 2016 Pulitzer Prize for poetry. Other works include Ziggurat (2010) and June-tree: New and Selected Poems, 1974–2000 (2001). His prose books include Vise and Shadow: Selected Essays on Lyric Imagination, Poetry, Art, and Culture (2015), and The Burning Tigris: The Armenian Genocide and America’s Response (HarperCollins, 2004).

His memoir, Black Dog of Fate, won the 1998 PEN/Martha Albrand Prize for the Art of the Memoir, and was a best book of the year for the New York Times, the LA Times, and Publisher’s Weekly. He also translated a book of his uncle’s remembrance of the genocide, Grigoris Balakian’s Armenian Golgotha: A Memoir of the Armenian Genocide 1915–1918, (Knopf, 2009), which was a Washington Post book of the year.