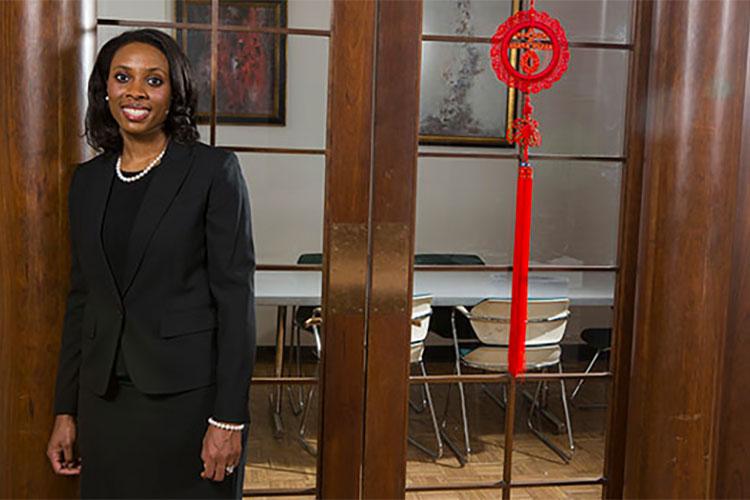 It all started on a St. Louis, Mo., elementary school library shelf. Clarissa (Polk) Shah ’10 discovered her love of Chinese culture at age 10 with a book of short stories. That fascination blossomed into a career, as well as advocacy work.

Although she studied Spanish throughout middle and high school, those short stories — written by Chinese authors and translated into English — had a hold on Shah. When her Spanish teacher told her, “So much is lost in translation,” she wanted more than ever to read them in Chinese. “I wondered, what am I missing?” she said.

At Colgate, Shah finally had the opportunity to learn Chinese. “Professor [Gloria] Bien made the language fun and accessible,” she said. Shah added that “the entire department was great,” and because it is small, each of the three professors (including John Crespi and Jing Wang) “helped with my development.”

Coincidentally, Bien assigned some of the short stories that Shah had first picked up a decade earlier, including her favorite: “The Kite” by Lu Xun. “Things had come full circle,” Shah said. “The language skills I developed made the story more tangible.”

As a sophomore, she was put on the spot to use her Chinese in real life while interning for the office of (then Senator) Barack Obama. Arranged through the Congressional Black Caucus Foundation, Shah’s internship involved handling constituent mail and answering phones. When a Chinese constituent called one day, a colleague asked Shah to speak with him. “I froze because I only had one year of Chinese. I was thinking, ‘Why didn’t our textbook have a scenario about working in a congressional office?!’” Shah said she stumbled through the call, but it ended well.

A year into law school at Washington University in St. Louis, Shah missed her Chinese studies. “I just didn’t feel like myself,” she said. So, Shah began to earn her master’s in Chinese, “and I felt like I was back home.” Shah earned her law degree as well as a master’s in East Asian Studies.

Today, Shah is supply chain counsel for Emerson, a manufacturing company in the Fortune 150. She gave an example of what her role entails: “If we want to buy plastic parts for a closet organizer [ClosetMaid is one of Emerson’s brands], I make sure that we do the purchasing via terms that are in the best interests of Emerson. So, that means having a contract that requires that suppliers don’t use slave labor, that suppliers are compliant with data privacy and security regulations, and the suppliers are equal opportunity employers, among many other things.” Shah travels to China often because many of their suppliers are there.

In addition to using her speaking skills regularly, Shah writes for China Daily. Her first article was about her experiences on Colgate’s China Study Group in 2009. She also wrote a piece when President Xi Jinping visited Obama, and she’s been asked to write a third article.

Shah also finds time to advocate for the importance of language learning. Last spring, she spoke at the National Chinese Language Conference. Afterward, a Chinese immersion school in New York City asked her to be on its advisory board.

For the Congressional Black Caucus Foundation, Shah recently taught a three-part crash course on Chinese language, history, and culture. She’s also trying to coordinate a program in which university students in St. Louis would tutor middle school students who don’t have access to language study. “You give back in the way you know how,” Shah said, “and for me, that’s through language.”

She gives back to Colgate, too. The Scene spoke to Shah when she participated in the SophoMORE Connections career program in January. “I love Colgate,” Shah said. “I made three of the most amazing life decisions here: I fell in love with my husband [Tushin Shah ’10], I fell in love with Chinese, and I persuaded my brothers [Caden ’12 and Charles ’16] to come here. I couldn’t ask for more.”