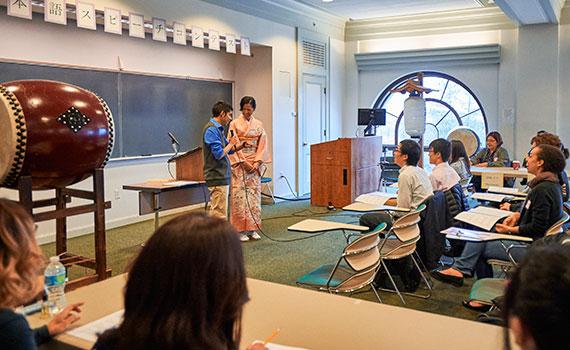 The Japanese Speech Contest, now in its 13th year, was open to students of Japanese and all other disciplines. Photo by Zoe Zhong ’17

The Japanese Speech contest celebrated its 13th year this April with a lineup of 13 competing speakers and a variety of Japanese food and performances.

Organized by Japanese professor Yukari Hirata, the event provides students with an opportunity to improve their skills with the language and gives members of the local community a chance to share their interest in Japan with others. The contest judges are Japanese people from the surrounding area; two of them have been a part of the event since the very beginning.

“It’s amazing to see how students benefit from the continuity,” explained Hirata. “Few have the guts to [compete] as a first-year student, but after watching the event, more will sign up in the following year. By their fourth year, people are ready to shoot for first prize.”

This was the case with classics major Elizabeth Johnson ’16, who watched the contest last year and decided to give it a try this time. Her speech was about her internship at a tatami shop (making mats used for traditional Japanese flooring), which earned the Japanese Culture prize. Although she was initially nervous, she said, “When it was actually time for me to stand up and deliver my speech, I was really excited because I had worked really hard on it.”

Dang Minh Nguyen ’15 was one of the few brave enough to participate in the contest when he was just a first-year, but his approach has changed a lot since then. “I used to spend more time polishing my grammar and practicing, but this year I decided to go with a fun approach and write a little more loosely.” His new approach clearly worked, because his speech about graduation won the prize for humor, and the audience hardly stopped laughing throughout his delivery.

Although he is not a Japanese major, Nguyen says that he feels like one, and many others who regularly participate in the contest feel similarly. According to Hirata, the event is open to “whoever wants to and has the guts to do it,” and everyone is welcome to watch.

The event’s cultural highlights included a performance of classic Japanese songs by a small choir, a taiko drum performance, and a traditional tea ceremony. During the reception that followed, attendees sampled a variety of Japanese food, such as yakisoba (fried noodles) and inarizushi (rice inside thinly sliced tofu).

“We want to be open to people who are vaguely interested in Japanese culture, even just in anime,” Hirata explained, “so they come in, eat food, and mingle.”