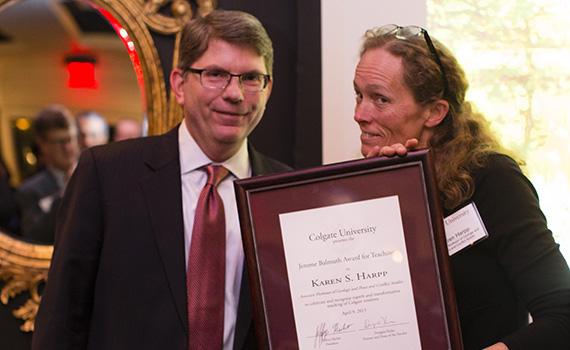 Last week, Associate Professor of Geology and Peace and Conflict Studies Karen Harpp added a 13th line to her list of teaching accolades when she received the 2015 Jerome Balmuth Award for Teaching and Student Engagement.

“I don’t think there’s anyone in any room who has the energy that Karen Harpp has or the passion she brings to teaching,” Provost and Dean of the Faculty Douglas Hicks told guests who gathered at the Colgate Inn to celebrate the occasion.

Harpp is the sixth faculty member to win the award, which was created through a gift from Mark Siegel ’73.

Whether the topic is volcanology or the advent of the atomic bomb, Harpp’s innovative, engaging approach has made her a campus legend. Described by students as “clear, helpful, approachable, and motivating,” she exemplifies the kind of teaching that Siegel wished to acknowledge with the award — named after another legendary teacher, Jerry Balmuth, Harry Emerson Fosdick Professor of philosophy and religion emeritus.

“Professor Harpp’s exacting work with students is critical for their further understanding of the options facing us in the immediate present and the indefinite future,” Balmuth said. “Her teaching is more than simply consistent with the Colgate teaching responsibility — it deserves attention as particularly outstanding.”

Harpp arrived at Colgate in 1999 from Lawrence University, where she began her career as assistant professor of chemistry. She earned her BA from Dartmouth, her MS and PhD from Cornell. Currently serving as university marshal and head of the Benton Scholars Program, she was the first Colgate professor to offer an online course via the university’s edX platform.

“You constantly need to find new and better ways to have students collide with the material,” Harpp said. “That means not being afraid to experiment with new technologies.” It’s a lesson she learned from her father, an organic chemist who teaches at McGill University.

From her mother, a high school teacher, she learned that, “you need to not be limited by the four walls that define the classroom,” Harpp said. “The entire world can be your classroom, which opens up endless possibilities for new ideas.”

In keeping with those lessons, Harpp has taken students to countries around the globe, teaching them about World War II on the beaches of Okinawa and about geology on the shores of the Galapagos Islands.

For the opportunity to travel with students, to teach them in her own way, to develop ideas in concert with colleagues from other departments, Harpp thanked fellow faculty members as well as staff, students, and alumni.

“Oftentimes, we act as though we do this all by ourselves, in a vacuum up front, but that’s totally not the case,” she said. “We are standing on the shoulders of generous, thoughtful, and committed people, who are dedicated to making the Colgate education as good as it can possibly be.”