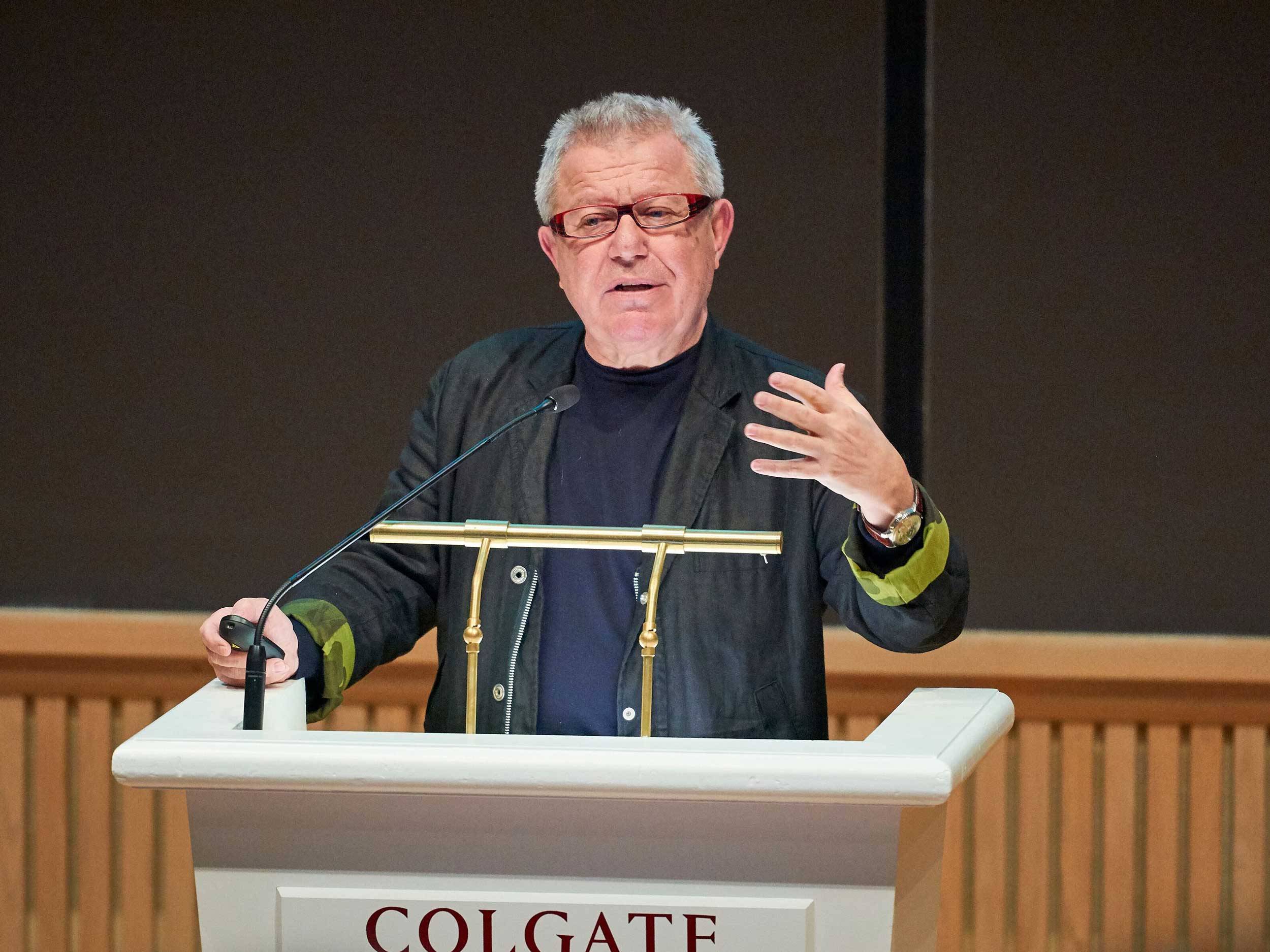 According to Associate Professor of Art and Art History Carolyn Guile, co-director of the Center for Freedom and Western Civilization and coordinator of Colgate’s new architecture minor, a unifying theme binds these structures together: “He creates built environments for the present that locate memory and experience in their center.”

Guile made her comments while introducing Libeskind to students, faculty, and staff, who packed Olin Hall on March 27 to hear him speak on design philosophy and his most famous projects.

Libeskind also spoke at length about his recently published book, Edge of Order. The title of the work is a nod to the French philosopher Paul Valéry, who said there are two dangers that constantly threaten the world: order and disorder.

“Why was there such a [historical] fear of departing from the right angle?” Libeskind asked. “It is the police of geometry, because the minute you do an eighty-nine degree angle, you have sabotaged what appears to be an authoritarian order.”

For good architecture to exist, Libeskind claimed, it must not fetishize either perfect order nor be completely without design and structure.

“The Parthenon,” he reminded the audience, “does not have a single right angle! The entire building is out of alignment — to make it look like it is aligned with the right angle!”

Libeskind’s philosophy, he claimed, relies on the balance between order and disorder, from which beauty is produced and all natural human environments can flourish. He expanded upon how this was applied in a number of his projects, including his work on the World Trade Center Master Plan.

“To me, the client was, first of all, the victims. And, ultimately, every New Yorker, every American, every person in the world, they are clients of this project as well.” Libeskind said. “I kept away the retail from the Ground Zero envelope — and I think that’s of importance, because it preserves the spirit of New York. America is about democracy, it is about justice, it is about freedom.”

Libeskind is currently working on a number of skyscrapers in Seoul and the restoration of the Vilnius Great Synagogue, among other projects. His visit to Hamilton, N.Y., was sponsored by the Center for Freedom and Western Civilization, with co-sponsorship by the Office of the President and the Department of Art and Art History.