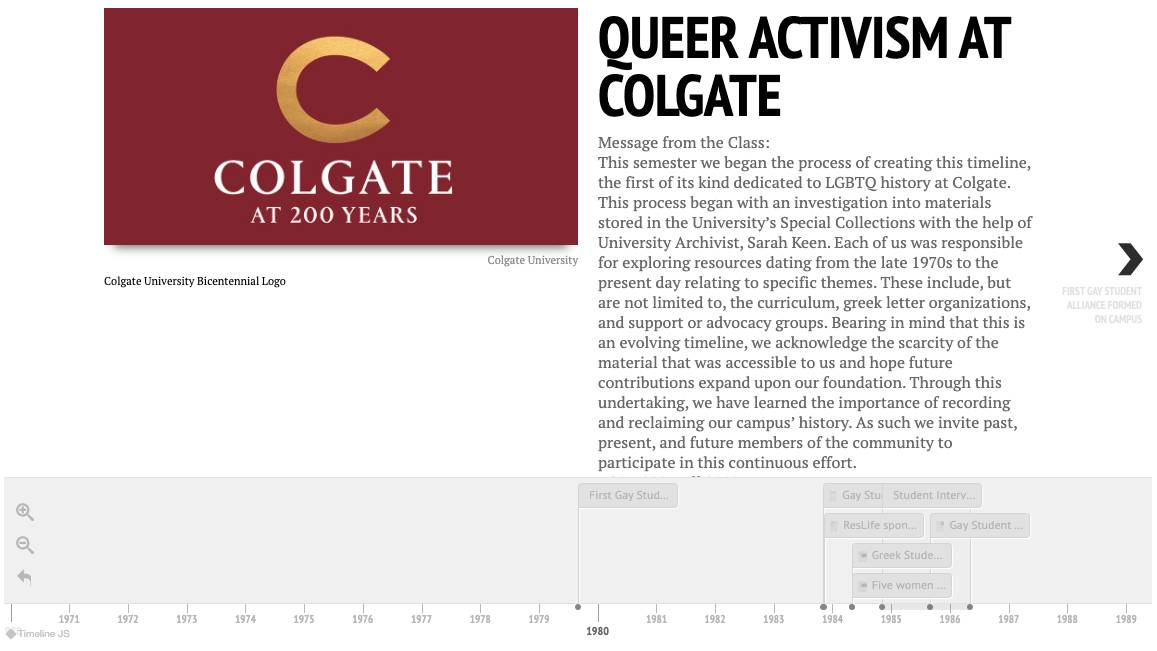 From the first Gay Student Alliance in 1979 to the University’s appointment of a new director of LGBTQ+ initiatives in 2018, the history of gay and trans life at Colgate now lives online in a student-curated digital timeline that will soon be augmented by an archived collection of audio recordings of first-person alumni experiences.

Professor of Mathematics and LGBTQ Studies Ken Valente said his students in LGBT 220, Explorations in LGBTQ Studies, started the digital timeline in 2018, with a three-year plan to continue the work each semester until his anticipated retirement in 2021.

“What prompted this whole project was the celebration of the Colgate Bicentennial. I wanted LGBTQ voices to be part of that,” Valente said. “They are so easily forgotten, and I didn’t want to let that moment pass.”

Students pored over old newspaper clips for information. They also had access to a wealth of documents kept by Colgate’s Office of LGBTQ Initiatives and special assistance from University Archivist and Head of Special Collections and University Archives Sarah Keen. Valente said students also reviewed faculty meeting minutes as a way of documenting the first official adoption of partner benefits at Colgate in 1997.

“I worked with the students over multiple class sessions to gain hands-on experience with primary source materials in a variety of formats and learn how to evaluate those sources and consider their context,” Keen said. “I also taught them how to navigate the inventories for archival collections and find materials relevant to their research. Archival research can be an iterative process, so we talked about how the information they were finding in their initial review of materials could lead them to additional sources.”

Students in the fall 2018 course wrote of the timeline, “We acknowledge the scarcity of the material that was accessible to us and hope future contributions expand upon our foundation. Through this undertaking, we have learned the importance of recording and reclaiming our campus’ history.”

Part of reclaiming that history included alumni interviews, as published information about LGBTQ life on campus was relatively sparse before the 1990s. Students in the fall 2019 course conducted interviews with a dozen LGBTQ-identified alumni to document their recollections of major events and day-to-day life on campus during their tenures. Valente feels that the recollections, while recounting differing forms of agency, consistently reflect the resilience that is often associated with LGBTQ communities.

Valente also noted that the potential for the interviews to complement the content of the digital timeline is a testimonial to the quality of the work undertaken by the students in both the fall 2018 and 2019 semesters. Work to document the experiences of those in the LGBTQ community will have a lasting impact on future student research in the area, Valente said.

“The research done to construct the timeline helped to inform the oral histories, and both will continue to help us better understand Colgate’s past and the experiences of those individuals who have been a part of the community,” Keen said. “Future researchers will be able to utilize these materials to uncover more stories and experiences or even bring new perspectives to understanding the information that already has been brought to light.”

Mackenzie Harrison ’22, helped conduct the oral history interviews. She said the work is helping to humanize moments in Colgate’s history.

“This work is really important because a lot of the issues Colgate is grappling with today are similar to past issues, so a lot can be learned from the history we are attempting to record,” Harrison said.

For Paul Raeder ’73, the late 60s and early 70s were a fraught time nationally for those who identify as LGBTQ. Raeder said that, while he and many of his friends were not public about their sexuality, they found friendship and an openness, thanks to campus clubs and organizations. Raeder was a Konosioni member, a Cobb Scholar, a member of the marching band and glee club, and, in his first year, he served as class vice president.

“We were totally in the closet. We were absolutely scared to death, not just of being shunned or not getting a job, but back then there was fear of being arrested or being called mentally ill,” Raeder said. “I had a wonderful experience at Colgate, but it’s important for younger gay folks to know what life was like back then. This was pre-internet, and it was a difficult time.”

Barb West ’89 said the most important memory she shared with Harrison was the fact that, early in her first semester on campus, the head resident in the Bryan Complex held a program on LGB issues.

“It was really formative for me. I had already come out to a few people in my home town at that stage but didn’t know if Colgate was a place where I could be myself,” West said. “His program let me know that, even though most places on campus were silent on same-sex attraction, if not downright hostile, not everyplace or everybody was. It gave me the courage to come out to a friend that January — she is still my best friend to this day — and to join the gay student alliance later in the year... I hope that the Colgate community learns that, even during the dark ages of the 1980s, campus life was diverse, interesting, and welcoming to people of all sexualities.”

Bob Connelly ’84 said he remembers being on campus at the very beginning of the AIDS epidemic.

“By the time we graduated in 1984, there was information out there, and there had been educational campaigns to alert people as to how the disease was contracted,” Connelly said. “We were able to learn about prevention before we graduated into the real world.”

Connelly said he agreed to participate in the interviews for the class project as a way to help bring to light what is often a hidden history on many college campuses.

“I think that the project that the students are doing is really important, in part because struggles and achievements of LGBTQ people are often overlooked or erased from history books,” Connelly said.

Alumni interested in contributing to this historical record of Colgate’s queer past can signal their interest using an online (Google) form.