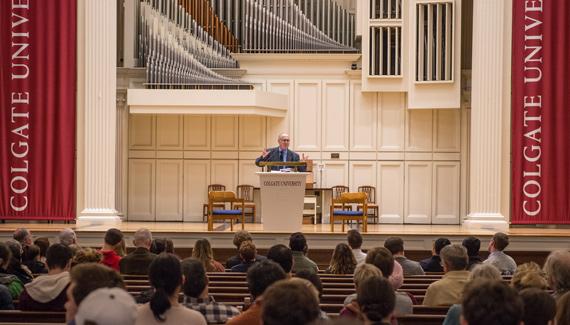 As Alan Dershowitz took to the Colgate Memorial Chapel stage on Monday evening for his lecture, “Civil Liberties in the Age of Trump,” about 20 students in the audience stood up and turned their backs in peaceful protest.

It was a moment of First Amendment exercise that the target, a controversial scholar of constitutional law and a lifetime advocate of civil liberties, was enthusiastic to support.

“You can listen with your back to me. In fact, that’s a perfectly legitimate form of protest,” Dershowitz said before launching into a vigorous defense against a 2014 sexual assault claim against him that has since been stricken from court records. “Maybe after you hear what I have to say, your protest can grow — or perhaps diminish.” One of about 20 student protesters stands at the start of Dershowitz’s lecture.

After about 13 minutes, student protesters silently filed out of the chapel and Dershowitz continued with his lecture, thanking the students for their peaceful display, and then inviting everyone to stay until the conclusion of his speech so that he could address their concerns during a question and answer session.

“I hope that we will be able to continue this conversation in a constructive way. I look forward to tough questions — probing questions — and please ask anything you’d like to. I hope that in the end we can learn together,” Dershowitz said.

Sponsored by Colgate’s Center for Freedom and Western Civilization (CFWC), the Dershowitz lecture is part of a year-long series of events designed to spur discussion and discourse, according to Carolyn Guile, associate professor of art and art history, Russian and Eurasian studies, and co-director of the CFWC.

“The freedoms we have on this campus are blessings we should not take for granted,” Guile said.

Center Director Robert Kraynak, professor of political science said, “Professor Alan Dershowitz gave a stirring lecture on the challenge of defending our civil liberties, enshrined in the Bill of Rights, as a matter of principle that applies to all people equally and impartially, regardless of personal identity or political self-interest. I think it was very important for our students to hear a great law professor and a life-long Democrat make the case that today’s threats to civil liberties come not only from the populist right but also from the ideological left, and that the vital center needs to be upheld by the next generation of leaders.”

Dershowitz bounced from topic to topic related to civil rights and the current public discourse on difficult issues. With views ranging from conservative to liberal, Dershowitz’s positions on a number of topics were varied. A self-described centrist liberal, he blasted President Trump for separating immigrant families at the border, and criticized advocate journalists on both sides of the political divide for reporting the same facts differently based on their audiences.

“Some of the media has prioritized ideology over truth — opinion, over-reporting,” he said.

Dershowitz also talked at length about the application of the “others’ shoe policy,” in which he evaluates questions on constitutional law based on whether or not someone would be making the same argument if the shoe was on the other foot.

“Free speech for me, but not for thee,” he said.

After the lecture, Dershowitz opened up to questions from the audience. He addressed topics including the current state of Middle East peace negotiations, the defense of O.J. Simpson, his recent book against impeachment of President Trump — “I am now a pariah in liberal circles,” Dershowitz said — and how the courts should interpret the Constitution in light of modern technology.

Dershowitz closed with thanks to Colgate, and a commendation of the university’s recently adopted report on academic freedom and freedom of expression.

“I think this was an excellent example of free speech at Colgate University,” he said.