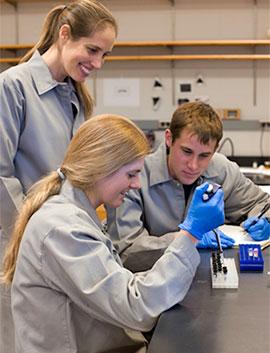 Colgate professor Jonathan Levine and his collaborators are designing a novel mass spectrometer to try to better determine the ages of rocks on Mars.

Two interdisciplinary science research projects featuring collaborations among faculty from Colgate and from around the world have been awarded funding by the Picker Interdisciplinary Science Institute at Colgate.

The projects support the core mission of the institute, which aims to foster the creation of new knowledge that is obtainable only through the development of sustained interdisciplinary research. Their project is titled “Timing is everything: The influence of circadian rhythms and gene-by-environment interactions on test performance and risk-taking in humans.”

Combining their expertise in molecular biology, cognitive psychology, and organizational behavior, the research team will integrate genetic analyses with psychological measures and behavioral tasks to investigate how an individual’s cognitive performance (e.g., standardized exams) and risk preferences (e.g., decision-making tasks) are related to the time the task is performed, an individual’s genotype, and gene expression profiles.

“This work represents an exciting new area of study in human sociogenomics,” said Picker ISI Director Damhnait McHugh. “By working across their disciplines, the team will help us understand the molecular basis for human performance and risky decision-making.”

They received a one-year award for their project “Laser-atom interactions in a mass spectrometer for dating Martian rocks.”

The team’s research goal is to increase understanding of the timing and timescales of Mars’s global climate change by estimating the ages of Martian rocks using a novel mass spectrometer.

The spectrometer will determine rock ages by measuring the abundances of rubidium-87 and its radioactive decay product strontium-87 in dozens of spots in a rock sample, using intense lasers to separate atoms of these elements from each other and from the rest of the rock.

The researchers will investigate the fundamental physics of how laser light interacts with atoms, so that they can best control those interactions to ensure maximum precision and accuracy in the rock ages they determine.

Their ultimate goal is to fly the new spectrometer to Mars on a future rover mission and date rocks found there in their geologic context.

“This collaboration brings together a physicist, a geologist, and a physical chemist to push the boundaries on our abilities to age rocks on other planets,” said McHugh. “Their work has the potential for some very exciting results, both in fundamental physics and in our knowledge of Mars.”