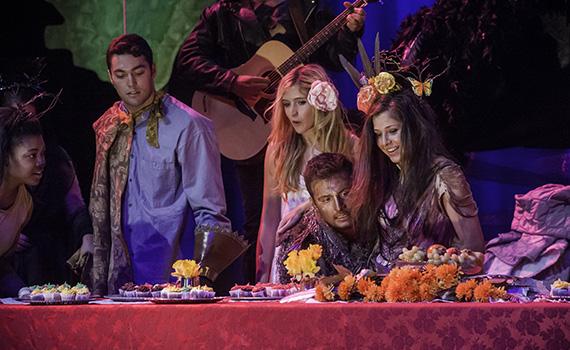 Colgate’s Task Force on Performing Arts Facilities, chaired by Professor of Art and Art History Padma Kaimal, has submitted its final report to the university community. The document offers recommendations to revitalize the creative landscape on campus.

President Jeffrey Herbst formed the task force in spring 2014, responding to a call made in the university’s new strategic plan for a comprehensive review of Colgate’s dance, music, and theater performance spaces. While the group is not an official building committee, its findings will inform future decisions and financial models developed by the administration and approved by the Board of Trustees.

“Colgate has long recognized the contributions that the performing arts can make to a liberal arts education,” said President Herbst. “The task force has produced an important document that can serve as a roadmap for the future.”

In its report, the task force recommends the creation of an artistic commons, anchored by a new performing arts facility and bordered by a renovated Charles Dana Arts Center and retrofitted Edge Café.

The performing arts facility would include a 250-seat jewel box recital hall, a small multipurpose theater with teaching and support space, dance studios, classrooms, and co-curricular performance and rehearsal rooms. Music and theater teaching and most performance would move into the facility from rooms in James C. Colgate and Ryan halls — locations that the task force determined to be inadequate.

According to the report, the Dana Arts Center could be renovated for theater and use by co-curricular performing arts groups; with its design returned to architect Paul Rudolph’s original vision, more natural light could enter the building. Dana would serve as a gateway to Memorial Chapel, which would retain its key historic role as the university’s main stage for large chorus and orchestra performances.

The Edge Café, part of a new Residential Learning Community to be established in the Bryan Complex, could provide a home for jazz, rock, and world music.

The 11-member task force held campus forums, connected with faculty and administrators at other universities, and consulted with performing arts facility experts.

Representatives from the admission office told the task force that applicants who indicate an interest in the performing arts — whether or not they intend to major in the discipline — generally have a more impressive academic profile than their peers and earn SAT scores that are 30 points higher on average.

“We are confident,” the admission report said, “that there are many potential applicants who are not even entering our application pool because of the conditions of our current facilities.”

As for undergraduates already on campus, the task force found that, “while nearly one third of the student body is involved in artistic performances, a community of performing artists with shared identity does not exist because practice, rehearsal, and performance spaces are too widely dispersed.”

The spaces are also too limited for Colgate’s high demand, according to the task force. “Lacking adequate spaces for practice and performance,” they state, “students and faculty have been forced to rehearse and create in tiny, often inappropriately designed rooms, late into the night, missing rich opportunities for formal mentoring and collaboration.”

Collaboration was a key element for the task force, whose mission was both curricular and co-curricular. “Having dance, music, and theater share physical space will lead to purposeful ‘accidental collisions,’ resulting in interdisciplinary initiatives,” the report states. “We have already seen what this has meant for the sciences housed in the interdisciplinary Ho Science Center.”

Astronomy professor and task force member Jeff Bary has seen the power of those accidental collisions firsthand. “My wish for my colleagues in the performing arts is that they have the opportunity to build as vibrant a community of scholars and students as we have in the Ho Science Center,” he said. “The creative possibilities for interdisciplinary classroom innovation and scholarship in the performing arts are endless.”

The need for new performing arts space goes beyond interdisciplinary education or even the desire to prevent students from needing to conduct dance rehearsals after midnight.

“But after our five open forums, what surprised me most was how deeply students and faculty from across the university felt the need for better performing arts facilities,” said Kaimal. “Students majoring in history and neuroscience, faculty in physics and biology, administrative assistants who work in James B. Colgate Hall — everyone felt that a new and better building could improve their daily lives and the reputation of their school.”