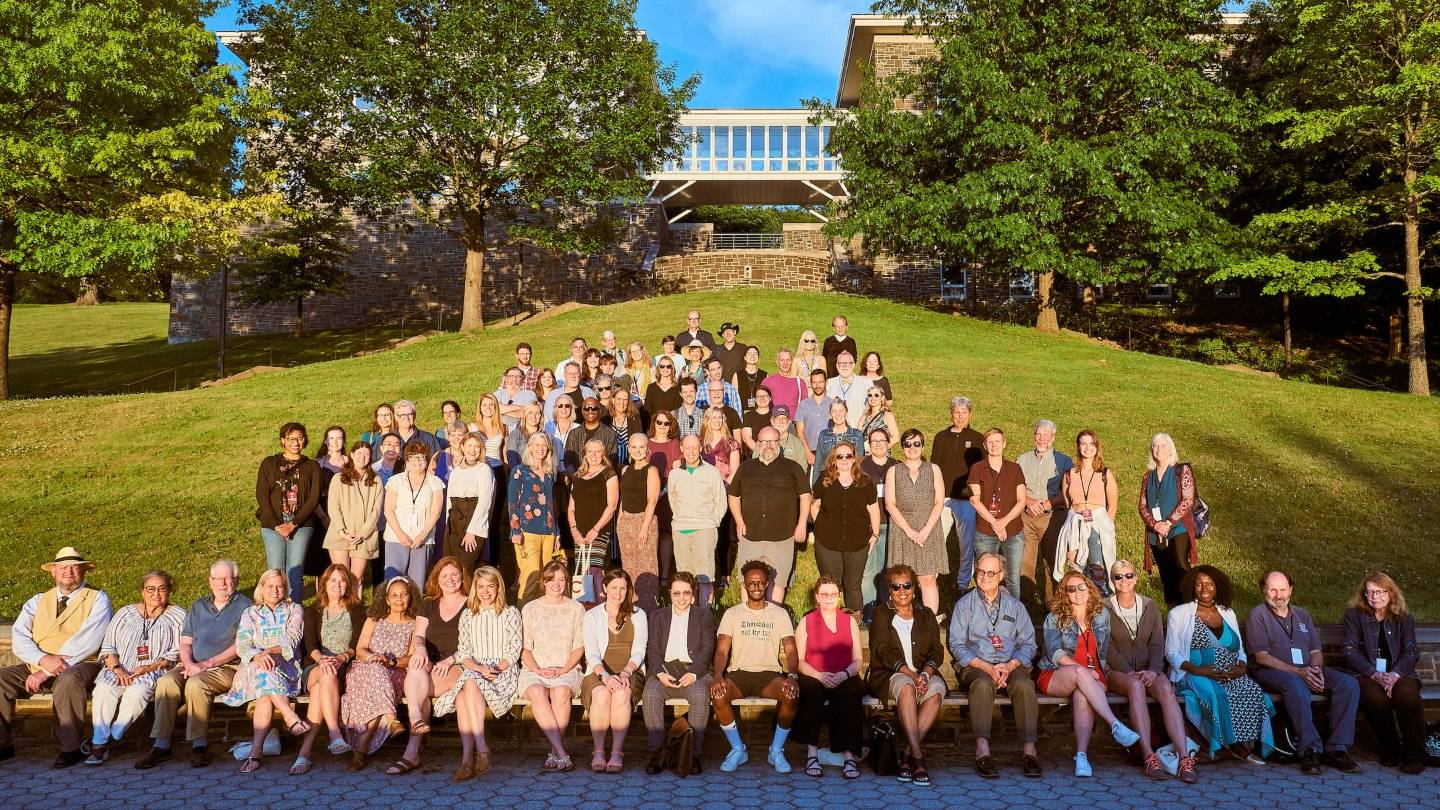 This year, the writers were back at Colgate.

More than 110 aspiring and published authors — alumni, parents, students, employees, local residents, and visitors from across the country — were on campus in June for the 27th annual Colgate Writers Conference. The event was spearheaded by Associate Professor of English Jennifer Brice, with assistance from four undergraduate Creative Writing Fellows.

Activities included craft talks, hosted by a distinguished list of faculty writers, as well as workshops, readings, publishing panels, and socializing in the evening on the Merrill House porch.

“I think people were hungry for in-person contact,” says Brice, who has seen attendance nearly double since 2019.

The theme of the conference rested on a series of questions: In times of crisis, where is the writer? How do writers in various genres respond to real-world crises? What’s the difference between art and journalism? Art and activism? Or is there any difference at all? How have the crises of the last few years affected our writing?

Attendees explored these questions through workshops on fiction, nonfiction, poetry, and dramatic writing. There was also a “jumpstarter” workshop focused on turning ideas into manuscripts.

Read on for excerpts written by three Colgate alumni participants, presented by the authors during participant reading sessions. Visit colgate.edu/writersconference and follow @ColgateWriters on Twitter to learn more about the Colgate Writers Conference.

Kelly was a double major in English and history while at Colgate. She also wrote for and edited the Colgate Maroon. After graduation, she spent 25 years as a magazine writer and editor. These days, she works on personal essays, fiction, and poetry.

How to boil an egg

First, one’s not enough.
Put two in a small pot, and
fill it with water.

Set on the burner.
Open an English muffin.
(You must use a fork.)

When the water boils,
turn off the flame right away.
Now, toast the muffin.

Right when it pops up,
run eggs under cold water.
Then crack with a spoon.

Scoop that perfectly
soft-cooked egg into a bowl.
Butter the muffin.

Think of your grandma.
She’s the one who taught me how.
I’m her egg, you’re mine. 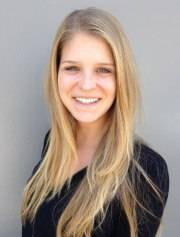 Michelle McCarthy is a graduate student studying creative writing at The New School in New York City. She writes both adult and children’s fiction and is currently working on her first novel about a single mother and her daughter, who live in the small agricultural community of Point Reyes Station, just north of San Francisco. McCarthy graduated from Colgate in 2013 with a double major in English and Spanish literature.

This excerpt was written in response to a writing prompt during the conference. Each sentence begins with consecutive letters of the alphabet.

As soon as the funeral was over, Joanne drove straight to Marge’s Bakery to buy an iced coffee, and then returned home, alone, to sit in the sunlit daze of her studio.

Before the funeral, she’d intended to host a reception in Javi’s honor. Casseroles and veggie platters seemed beyond her now—her only wish was to exist silently amid the chemical smell of her paints, watching the dust motes filter through the warm air, ignoring the fact that nothing had changed from the day before—Javi had died five days prior, so day six was really no different—and yet, somehow, everything was altered.

Death was like that, she thought. Eventual, expected, uneven—a chasm expanding between before and after. Feeling hadn’t struck until today, until the songs and the speeches and the burying of the small wooden box in the dusky soil on the hill, a burial incomplete for what she’d removed.

Gently with her bare fingers, Joanne had siphoned off pinches of her husband, sprinkling them into a snack-sized Ziploc that now rested on her kitchen counter. He wouldn’t want to be in the ground, she knew. It was the water that had beckoned, the bay; always had been. Javi’s place in the earth was for those he’d left behind, but the water, that was for him.

Kneading her hands through the ridges of her hair, Joanne unfurled the bun she’d fastened earlier in the day, pulling the pins from each strand. Legs curling, she draped herself into the reading chair across from her easel, staring out the bay window toward the maple tree and the dry field beyond. Motion flickered in the distance—the twitch of an ear, the white of an eye, a cream-flecked tail skirting the trees at the fringe of the grasses. No one else had seen, no one else to bear witness, no sound save Joanne’s own breathe and the hum of the refrigerator from the kitchen, an invisible metronome in the background.

Onward. People moved onward. Quickening past death and grief and despair, past whatever this stage was that Joanne now found herself in, a cold internal silence like a mirror reflecting blinding light. Rage, frustration, despondency, tears—these would have been more acceptable, but for whatever reason, they wouldn’t come. Settling more deeply into the chair, Joanne looked at the tubes of pigment covering the windowsill, the canvases propped against the wall, Isabel’s books arranged by color on the shelves in the corner—favorites only, ones deemed worthy of keeping—her “book friends,” Isabel always called them.

That was one good thing, at least. Unbeknownst to Isabel, it had been quietly arranged, this shepherding of Joanne’s daughter and all her six-year-old questions away, just temporarily, so that Joanne could get a grip. Visibly shaken at the graveside, Joanne felt blank now, like a canvas unpainted, unclaimed.

Would she ever feel normal again, would this new after eventually bend to form one more day in a chain of days, just as one letter follows so inevitably from the next? X, then Y, then Z. You’ll never escape this, some hollowed part of her thought. Zero-sum gains against zero-sum odds: moving on meant forgetting, another form of loss, and forgetting seemed impossible, no matter how she might try. 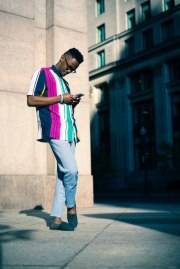 Solomon Tesfaye was a first-generation graduate from Colgate, where he majored in behavioral neuroscience and minored in Islamic studies. After graduation he went on to work for a strategy and market research consulting firm in Boston. He then left to pursue a masters degree in public policy and development economics from Princeton University. He currently works at a consulting firm in Washington, D.C., delivering insights to executives.

I'm an Ethiopian refugee, born and raised in a refugee camp in Yemen. I've been extremely lucky to have come to America and get some of the best education the world has to offer.

Where I come from, people don’t really have the opportunity to engage with literature. (That’s a privilege that my parents and my education afforded me.) And when they do, they don’t recognize themselves in the characters of mainstream literary fiction. I don’t either. I think that a book written by us, for us (refugees), could make readership more inclusive. I want others like me to have the option to go to a bookstore and say, “Ah, ya, that sounds just like me.” Or, “This reads like something my mom would say!”

This is why I'm working on this novel and trying to find a publisher to save our stories from the sea of forgotten tales and make our stories come to life.

Parable of the Children in The Field

A foreigner should be well-behaved.

Life as a refugee in Yemen, or anywhere for that matter, is like tiptoeing across a crumbling bridge in the dark and trying not to draw attention to the fact that you’re stuck between nowhere and forever, as you navigate your way to steadier shores. You keep trying to see where you are but the darkness around you keeps you from seeing. And you have no way of knowing what threat lurks with each step you take forward. The not knowing is what makes you so afraid.

One day you decide to stop moving forward and you learn how to live off of memories. Right there where you stand.

Here, in the camps, it is hard to live. But everyone fights to keep on living.

It was here, in the camps, that Dawit’s parents met. And they were fighting for more than just their own lives.

His mother had only been married to his father for three months before he was born. When she arrived at the camp, she had many suitors; navy men, Yemeni’s from town, and men who’d barely escaped death, like his father. But to her, there was no one she loved like his father – the kindest man she had ever met, she said once. And yet she made him beg and petition for months before she finally chose him. She had him on his knees in the rain like some shit out of The Notebook, except the rain his father felt were his mother’s tears. She was a proud woman but life was cold, and dark, and dreary in the camps. She was probably glad that she didn’t have to go through it alone anymore. A woman by herself didn’t stand much chance.

Since his father didn’t have the money for it, he proposed with a ring that he’d carved from a tree branch. She didn’t wear it often because it pricked her finger, and it was too small—an unwelcome reminder of how much weight she’d put on during the pregnancy.

Dawit’s parents never talked about those days, but his mother must have been in a permanent state of fear. The days were long, but the cold nights were always longer, and children were the most vulnerable because they needed protection.

The camp was small, crowded, and constantly smelled like something was rotting away. To get food, you had to join a big queue and the more crowded the camp got, the less food there was to go around. His parents went from eating three times a day to just having one meal, and even then, they didn’t eat much. They gave all that they had to Dawit and starved themselves for more nights than they were willing to admit to him.

The summer months were always unbearable. Sheets of hot light penetrated through the lines of thick bamboo that made up the walls of his parents’ tent. The tent was held up by three tree poles and covered with white polyester canvas sheeting with the UN brand at the front, and on the sides—turning their homes into a full-blown advertisement campaign for the nech faranjoch, or the white foreigners, as his uncles liked to call the UN employees; they emphasized the white part.

The torn up covering on the side and roof of the tent made the whole tent look like it was Yeezy inspired. Everything that goes on inside it was open to the world because the flaps won’t close.