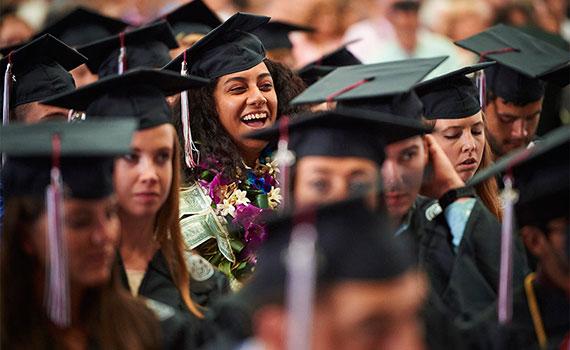 Members of the Class of 2015 (Photo by Andrew Daddio)

During commencement exercises yesterday, Colgate University extended congratulations to the Class of 2015, family members cheered, and seniors enjoyed one final class together as undergraduates.

The lesson came in three parts. First, President Jeffrey Herbst reflected on America’s cultural obsession with being busy and asked students to reconsider how they answer the simple question, “How are you?”

“When asked how you are, never say ‘busy,’ Herbst said. “Rather than expressing to others the velocity at which you are doing things, why not discuss what you are doing?”

Taking this approach serves two purposes, Herbst said. It fosters a deeper connection with the person asking the question, and “will require you to reflect on whether what you’re doing has meaning.”

Board of Trustees Chair Denis Cronin also stepped forward to award an honorary doctorate to President Herbst, who leaves his post as the university’s chief executive this July.

The third and final lesson of the day came from Glaude. In a commencement address titled “Turning Our Backs,” he focused attention on the future of “a world that is,” he said, “quite ugly in its details.”

As Herbst had spoken of right action and attention to the nature of being busy, Glaude asked, “How will you orient yourself to the ‘fierce urgency of now?’”

According to Glaude, “It is the power of a true liberal arts education to ruthlessly expose you to ideas that will shift the ground beneath your feet.” That process teaches students to question basic assumptions and to reexamine the way we treat our fellow human beings.

“Members of the Class of 2015, will you do the work to free up your imaginations to dare to believe that this world can be different?” he asked. “All possibilities, even in the darkest of times, reach us through our imaginations.”

Glaude urged students to turn a critical eye on the world’s ugliness and take action to ensure a brighter future for humanity. He noted that hundreds of students began that process last fall when they occupied the administration building for 100 hours to demand a Colgate for all — an academic home where every student feels equally welcome and valued.

“You and I must seize hold of the idea that a different arrangement of things is possible,” he said. “And you must do so with passionate intelligence, in which you bring the fullness of what you have experienced and learned here at Colgate to bear on the world.”

He warned of the long road ahead. “Your commitments to improving Colgate, our country, or the world can’t be fleeting,” he said. “Those commitments don’t work like a tweet or a post on Instagram or comments on Yik Yak. They ought to animate the spirit of a life lived over time.”

Earning a Colgate degree is no easy feat; just ask class valedictorian John Robert Murphy or salutatorian Ariel Elizabeth Sherry. In classrooms and labs, on athletic fields and the artistic stage, students constantly challenge themselves. Glaude encouraged his audience to continue in that mindset.

“Members of the mighty Class of 2015, you must challenge yourselves; you must continue to challenge Colgate; and you must challenge this nation not only to be better, but to do better,” he said. “It is your inexhaustible voice, to paraphrase William Faulkner, your ‘spirit capable of compassion and sacrifice and endurance’ that is the only possible salvation we have now. It is in your hands.”

The Class of 2015 rose as one to applaud the sentiment, then individually received the diplomas that they worked so hard to earn, before walking out of Sanford Field House — into the life that awaits them as Colgate’s newest alumni.