Baccalaureate speaker tells graduates: “You’re not ducking for the camera” 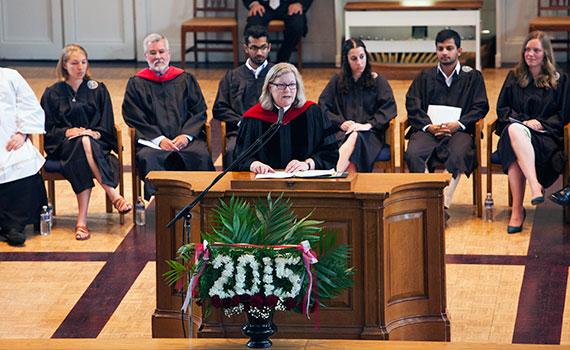 When Rev. Gay Clark Jennings ’74 was a student in Colgate’s first graduating class of women, she was part of historic change. A varsity volleyball player, she pressed the university’s president for equal medical benefits for female athletes under Title IX; investigated grocery store price gouging in Madison County’s poorest areas; and marched against the war in Vietnam.

When her father told her he’d cut off her tuition if he saw her on television in a protest, she told the most recent graduating class gathered in Memorial Chapel for Saturday’s baccalaureate address, the determined activist told him she’d just “have to duck when the cameras were around.”

In contrast, she observed the very visible testimonials posted on social media by members of the current Colgate generation on the recent Day of Impact on March 13 (#ColgateImpact), when more than 1,700 pledged to do random acts of kindness or volunteer for the less fortunate.

“You’re well equipped to think creatively and critically about how you will make an impact in the public square,” she said. “You’re not ducking for the camera.”

Invoking the words of Congressman John Lewis, a “lion” of the Civil Rights Movement, Jennings exhorted the graduates to join the likes of Dr. Martin Luther King Jr., Rosa Parks, and Lewis himself to “get in some good and necessary trouble” in order ­to “look out for each other and for the most vulnerable people in our midst,” she continued. “I see it in cities where the slow burn of systemic racism has caught fire; in schools that are educating children who have no other hope; in boardrooms where executives are creating human working environments and paying a living wage; in churches, synagogues, mosques, and temples where people are repenting of religious racism, homophobia, and sexism and embracing the dignity of every human being.”

The baccalaureate speaker for the 194th commencement, Jennings is the first ordained woman to be elected president of the Episcopal Church House of Deputies. As president, Jennings has been committed to fostering a new generation of leaders in the Episcopal Church and strengthening its commitment to vulnerable children, immigrants, and lesbian, gay, bisexual, and transgender people.