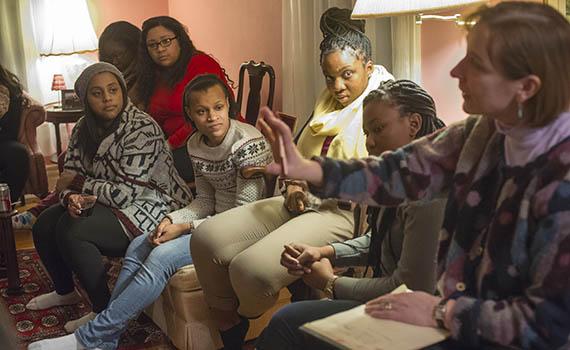 Students in Professor Mary Moran’s Model African Union course gather at her home for a final class and dinner. (Photo by Duy Trinh ’14)

When Neal Barsch ’14 found out he would be representing Sierra Leone at the National Model African Union in Washington, D.C., he knew he would need to make some fast friends to accomplish his small country’s diplomatic goals.

“If I wrote a resolution based on just what was just good for Sierra Leone, it wouldn’t have passed,” said Barsch, an economics major from Colorado who earned two top honors awarded by his peers at the event.

For Mary Moran, professor of anthropology and Africana and Latin American studies, it is that kind of interaction that makes the Model AU simulation an enriching experience for students of all academic majors.

“They have to work together. They have to give up on their egos a little to get something done,” Moran said. “And the committee chairs also have to keep order with 50 of their peers in a large conference room with nothing but a gavel and their knowledge of Robert’s Rules of Order.”

The event brings students from across the country each year to simulate a meeting of the real African Union. Each student is assigned a country to represent and placed in a committee where resolutions are proposed, debated, and acted upon.

Colgate has participated in Model AU since the mid-1990’s, and in 2010 it became a half-credit course. Students meet weekly to work on resolutions and to study their assigned countries prior to annual meeting, which took place from February 20 to 23 this year.

Moran said the course is popular, as she ends up turning away students each year.

“It’s also nice for the students to get a chance to meet alumni in the Washington D.C. area involved in government and international relations,” said Moran, who also hosts students at her home for a final class dinner following the Washington trip. Of the 20 Colgate students participating in Model AU, seven acted as committee officers, including two chairs and two vice-chairs. Lwam Stefanos ’14, a political science and English major from Morristown, N.J., served as vice chair of the Assembly of Heads of State and Government on the final day, as did Gloria Kebirungi ’15, an economics major from Uganda who also served as parliamentarian.

“The first thing most people participating will tell you is that it’s a very frustrating process. You’re in the same committee room for like eight hours and arguing with 43 people,” Stefanos said. “When you walk away from that, you get the biggest sense of accomplishment, especially when the committee has been run well.”

By participating in the Model AU, Stefanos said it becomes easier to understand much of the political strife on the continent of Africa, yet the solutions become less obvious.

“There’s so many things you don’t understand until you take part, specifically when you hear about issues that are hindrances to development in Africa,” Stefanos said. “It’s easy to say something like, ‘we should stop human rights violations in Africa,’ but it’s a different experience when you’re doing it yourself. You realize how complicated it is.”