Colgate Researchers Use UAVs for Wildfire Research in Russia 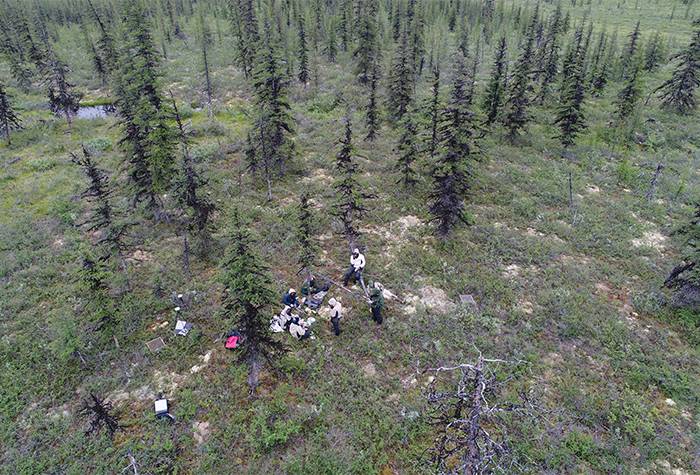 The published paper, which focuses on the use of uncrewed aerial vehicles (UAV) to survey wildfire recovery rates in Russia’s Siberian forests, was co-authored by Anna Talucci, who is a Colgate geography postdoc; geography major Elena Forbath ’21; and Associate Professor of Geography Michael Loranty.

Forbath said her trip to Siberia last year for this research project put her right in the center of a team of researchers working to understand how forest recovery post wildfire can impact climate change — how growth, or lack thereof, decreases the availability plant-based carbon sequestration.

“I think the bottom line is there won’t be enough vegetation to sequester carbon as more carbon enters the atmosphere,” said Forbath. “With the increased number of fires, we won’t have enough plants to sequester massive amounts of carbon, so it’s another issue related to climate change.”

The work had two major components: to analyze the impact on carbon sequestration for these forests recovering from fires and to examine the effectiveness of UAV use for this research.

“One of the main things we looked at was how vegetation has been growing after these fires. If it is growing, how long has it taken? It takes quite a bit of time for those forests to recover from these fires, given the analyses we’ve used,” said Forbath.

Talucci said the difference between satellites and UAV image resolution is notable, as satellite imagery offers a resolution of about 30 meters per pixel on the screen. With the drone data, scientists can see one to two centimeters per pixel. There’s also an improvement on temporal data, as the satellite being used for this work takes images about every 16 days.

“Field data taken by humans can be time intensive,” Talucci said. “You still need humans to collect UAV data, but in this case they can study an entire 250 meter transect instead of eight plots. This provides a landscape perspective, which for large-scale ecological disturbances, is ideal. The bonus is that this research is in the special issue of She Maps.”