Colgate to assist in largest deployment of seismometers along Alaskan Peninsula 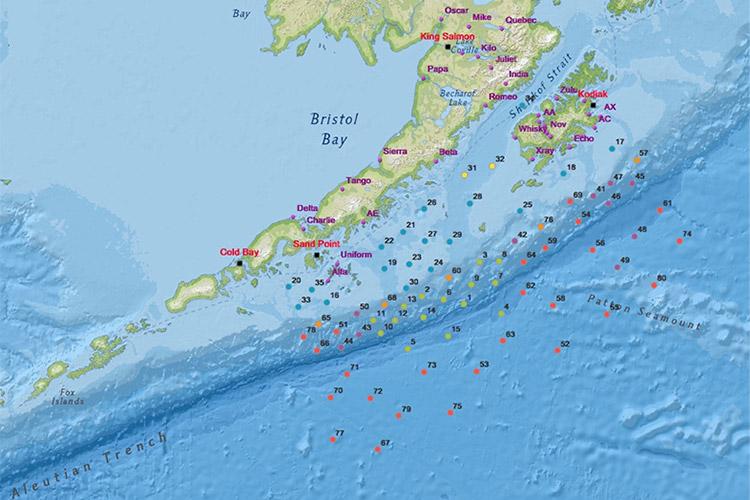 Locations of some of the 105 seismometers slated for deployment.

Aubreya Adams, Colgate University assistant professor of geology, is one of 10 principal investigators from nine universities teaming up to deploy the single largest collection of seismometers ever assembled along the Alaskan Peninsula.

Relying on $4.5 million in National Science Foundation grant funding and a fleet of airplanes and ships, the seismic experiment will place 105 high-end seismometers off a 435-mile-long stretch of the peninsula’s coast — and as far off shore as 300 miles — to help increase understanding of earthquakes and volcanic eruptions.

“This year, we’ve been determining locations where we should put the instruments,” said Adams. “Field work begins this summer. Some team members will go on ships to deploy the instruments, and I’ll be taking a Colgate student with me to install seismometers on land, either driving or taking float planes to remote locations.”

Geoff Abers, professor of earth and atmospheric sciences at Cornell University, is leading the Alaska Amphibious Community Seismic Experiment. Scientists have long been attracted to the region because of the subduction zone located at the bottom of the ocean where the Pacific and North American tectonic plates collide. Ninety percent of all U.S. earthquakes occur here, and it’s the only location in North America where magnitude 8 and 9 earthquakes have been recorded. A seismometer is placed into the ocean on a previous expedition.

“We’ll be using signals from earthquakes we record to try and learn more about what the stuff down there is made out of,” said Abers. “Where do the magmas that show up in volcanoes come from? Somewhere below the crust, they form, and there’s a lot of debate about what that process is. And how does that actually trigger the volcanos, and why are they where they are?”

The seismometers are scheduled to be deployed in the spring of 2018, with the goal of beginning recovery efforts in the summer of 2019. Only then can researchers collect data and provide it openly to the entire science community.

Adams will be leading one of the ships recovering the scientific equipment from the sea in 2019, and then will assist with reviewing the massive amount of collected data.

“It will be staffed by undergraduates and there will be a national competition for spots on that ship. They’ll take part in a workshop in Anchorage on seismology and shipboard activities and the geology of the region as well,” Adams said.