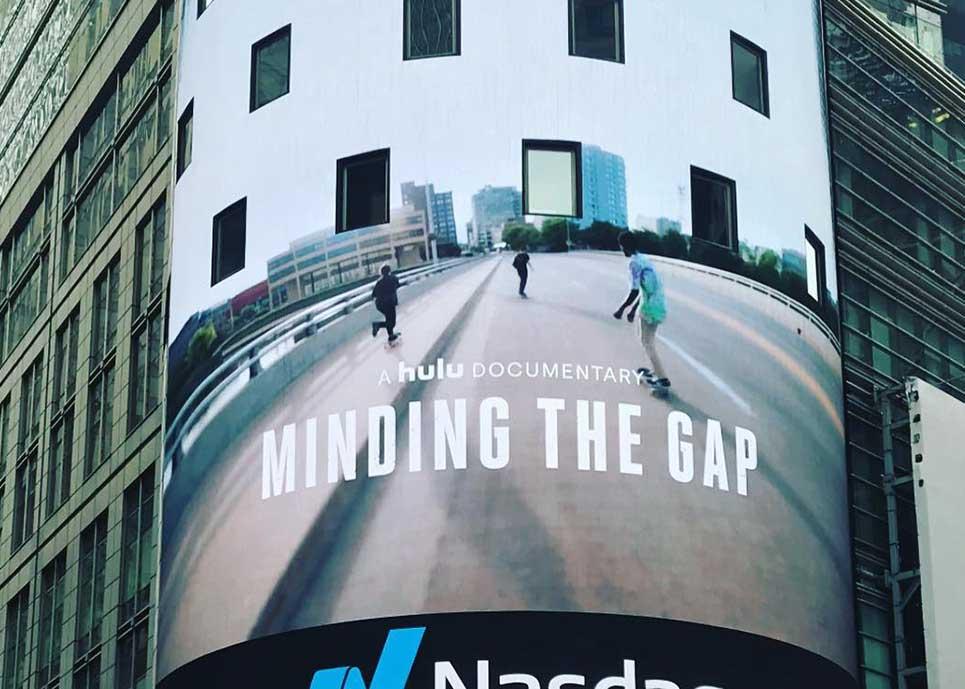 Minding the Gap in Times Square

The Academy Awards are quickly becoming a reunion for Colgate grads in the 1s and 6s.

While nearly two decades separate their time at Colgate, Julie Cohen ’86, Chris White ’91, and Matt Renner ’01 will find themselves under the same roof on February 24: as executive producers and directors for films nominated for Best Documentary Feature at the 2019 Oscars.

White executive produced Minding the Gap, a coming-of-age story that follows the friendship of a group of skateboarding teenagers. The skateboarding footage is not only exciting to watch, but also showcases the therapeutic space a shared passion can provide.

“Film is an emotional medium and, in the hands of gifted storytellers, the lives of everyday people can jump off the screen, connect with an audience, and become transformational works of art,” White said. “Minding the Gap is a profound and cinematic exploration of what it means to become a man, all cloaked in the revelry of youth.”

As an executive producer at American Documentary Inc., White is no stranger to recognition. He produces PBS’s award-winning documentary series POV, whose films have racked up 13 Academy Award nominations and have won 23 Emmys during the course of his 17 year career.

“I’ve presented over 300 films during my time at POV and Minding the Gap is one of the best,” White said. “[Director] Bing Liu deserves the Oscars spotlight, and my hope is that this exposure will launch his career to greater heights.”

The biopic, directed by Jimmy Chin and Elizabeth Chai Vasarhelyi, challenges the boundaries of what is possible in the sport of rock climbing. While difficult to produce, as drone shots were deemed too distracting to the climber — who could easily have plummeted to his death with one misstep — helicopters, ground crew, and remotely positions cameras accumulated the stunning footage.

Alumni representation in the Best Feature Documentary category does not end there.

Julie Cohen ’86 and Betsy West directed RBG, the recent biopic following the life and achievements of Supreme Court Justice Ruth Bader Ginsburg. The largely female-produced film celebrates women sticking up for themselves — legally and otherwise — and is also nominated in the category. For more information on Cohen and the filming of RBG, read the full article in Colgate Magazine.

On turning the red carpet maroon this month, White said, “I’m proud to be a Colgate alum, and I’m equally proud that we are so well represented in the independent media world.”