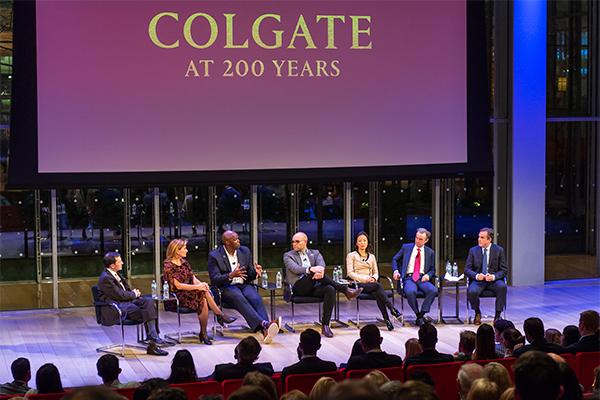 “Shaping Our World: An Evening With Colgate Alumni Leaders” was held Jan. 8, 2019 at TheTimesCenter in New York City. (Photos by Mark DiOrio)

If Colgate’s founders could have traveled from 1819 to 1/8/19, they might have been in the audience to see seven of the University’s most influential alumni as they took to the stage at the TheTimesCenter in Manhattan to engage in a thought-provoking panel discussion, simultaneously celebrating the 200th Professional Network Event and Colgate’s Bicentennial.

Launched in the fall of 2013, Colgate’s Professional Networks (CPN) were created to encourage career exploration and growth among students and alumni. Five years and 200 events later, CPN events have become a nationally renowned example of alumni engagement and career support.

“These networks were formed by the University, but they have been sustained by you, our alumni, our parents, and students,” President Brian W. Casey told the crowd of nearly 400 alumni and friends. “Again and again you’ve done what Colgate people do — you’ve made connections with one another, with your university, and with the newest graduates.”

“There was nothing called cybersecurity when I was at Colgate. There was no Internet when I was at Colgate,” said Coldebella. “But one of the things that Colgate does such a good job of is preparing its graduates for dealing with change in the world. From the time I graduated in 1991, I’ve worked at a new government agency called Homeland Security, I’ve dealt with a new discipline called cybersecurity, and now I’m at a company at the forefront of cryptocurrency, a brand new asset class.”

Rapid change was a theme of the evening. Fleming said he has seen financial market shifts in ways that were previously unimaginable, with China leading the way.

“For the younger people in the room, the millennials, you are entering a world that could not be more different than the world I came from. There’s been a lot of change in 25 years,” Fleming said.

Pak said she, too, has witnessed tremendous change since her time at Colgate, and she advised current students in the room to follow an educational path that interests them over what might be the current state of the world.

“Little did we know that China would rise and become the second largest economy in the world,” Pak said. “I learned that, when something interests you, just follow it. People used to say not to bother studying nuclear proliferation because it’s not going to be a problem, except that it is a problem. ”

Adonal Foyle reflected on the discussion after the event, saying “I think this is an affirmation of what makes Colgate unique. Part of the beauty of Colgate is that I learned poetry from Peter Balakian, I learned to think philosophically from Coleman Brown, and I learned to appreciate theater from Kathy Liepe-Levinson and Jacques Levy. In many ways, they shape you to be a global ambassador and to have an appreciation of the world.”