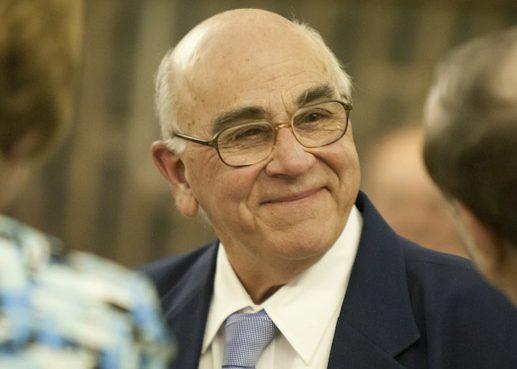 To paraphrase Michael Stipe and R.E.M., 2012 could be the end of the world as we know it. And pioneering archaeoastronomer Tony Aveni, Russell Colgate Distinguished University Professor of astronomy and anthropology and Native American studies, has every reason to feel fine.

He has written more than two dozen books, including The End of Time: The Maya Mystery of 2012, earned grants from the National Science Foundation, been named a CASE National Professor of the Year, and served with Stephen Hawking as a Youtube/Lenovo Space Lab Competition judge.

On March 30, Colgate gave him another reason, awarding him the third annual Balmuth Teaching Award in recognition of his legendary skills as an educator.

Colleagues, friends, and alumni gathered with award founder Mark Siegel ’73 in the Hall of Presidents to mark the occasion. “For me, what distinguishes a great undergraduate education is great inspirational teaching,” Siegel said in his remarks. “Though this might seem obvious, it is often overlooked.”

The award therefore shone a light on Aveni’s long and distinguished career and also allowed the audience to look ahead to Colgate’s future — one built on the skills and values that Aveni continues to bring into the classroom each semester.

“Colgate is an institution that depends on teachers from generation to generation succeeding each other, learning from each other, and carrying on a great pedagogical tradition,” President Jeffrey Herbst reminded the audience.

The man of the hour was preceded at the podium by the prize’s namesake, Jerry Balmuth, Harry Emerson Fosdick Professor of philosophy and religion, emeritus. In his remarks, Balmuth spoke of the urgency of Colgate’s mission and the vital importance of great teaching.

“After all, we’re not teaching in limbo,” he said. “We teach in a democratic society that depends for its very future on the moral maturity and intellectual integrity of its citizens. And we believe that the liberal arts college — Colgate — is especially situated to help realize that need.”

Aveni has been doing his part to realize that need for more than four decades. When his turn came to address the audience, he thanked Siegel and then did what he does best: he told stories — of coming to Colgate in the 1960s and finding mentors who encouraged his creativity. He held the audience’s attention with his wit, but firmly reiterated the evening’s theme.

“Let the young people who come here develop the rich careers I think they can have in the classroom at a place like Colgate,” he said.

Putting it all in context — the prize, the recipient, and Colgate’s ongoing tradition of excellent teaching — Siegel himself stated it best. “We are so lucky to have Tony Aveni as one of us here at Colgate.”