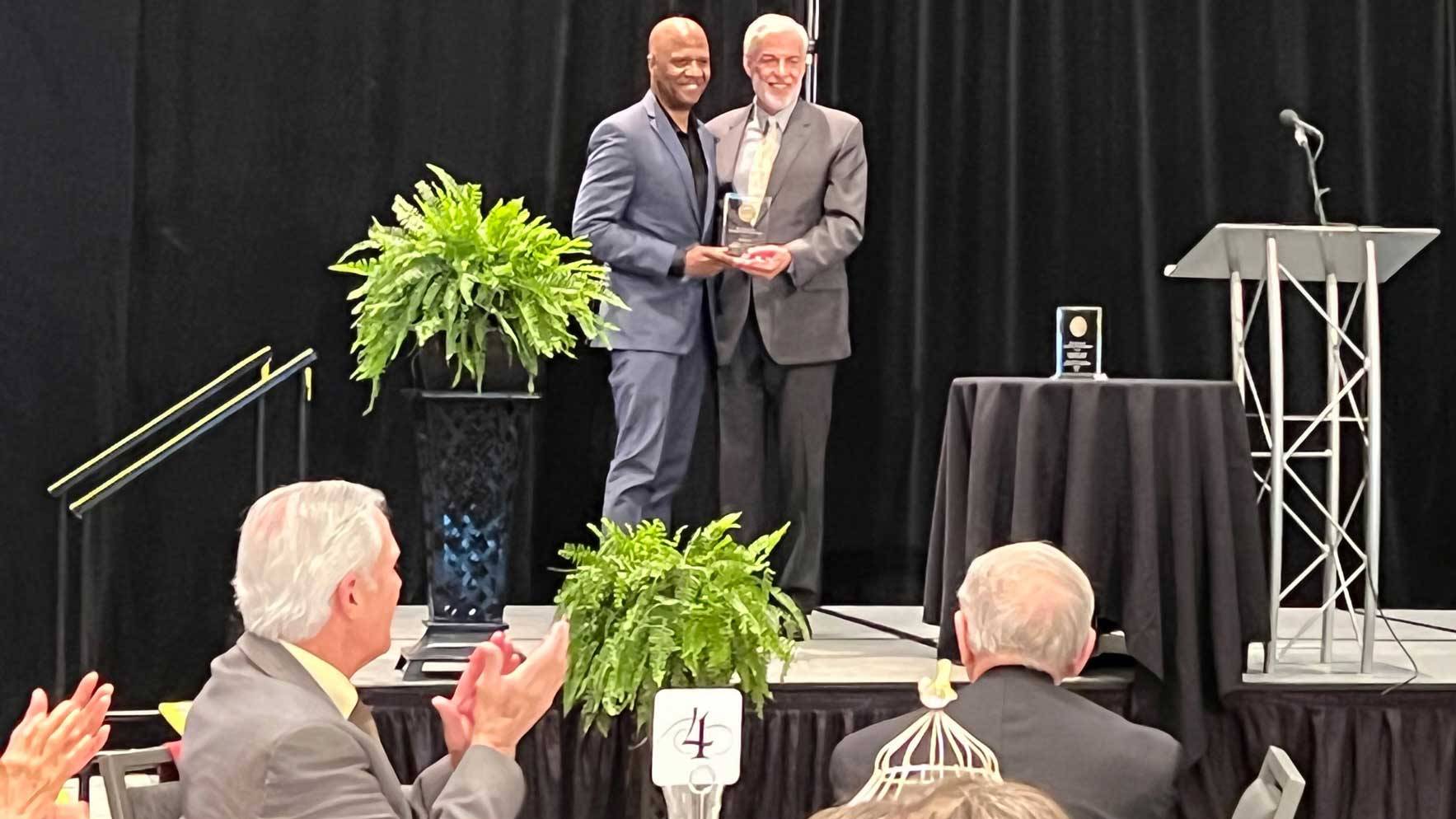 The OHA Medal is the organization’s highest honor, bestowed upon individuals for contributions made to the cause of preserving and interpreting local history. Bass received the award in a special ceremony at the Syracuse Oncenter, Thursday, May 26.

“In much of my playwriting, I’ve taken local historical persons and events and have braided fact with dramatic fiction, attempting to arrive at deep truths that resonate with contemporary audiences,” Bass says. “To be recognized for my work with the OHA medal is especially meaningful to me because of the longstanding collaborative relationship I’ve enjoyed with OHA — a relationship I hope continues well into the future and remains a vibrant source of creative inspiration.”

Bass, the resident playwright at Syracuse Stage and former Colgate University Burke Endowed Chair for regional studies, has worked with the OHA on numerous endeavors throughout the past 14 years, including developing backdrops for the play Tales From the Salt City, developing historical exhibits in the Syracuse Stage lobby, and ultimately being commissioned to write the play Possessing Harriet, which debuted at Syracuse Stage to critical and audience acclaim in 2018.

“We wanted to make sure that we selected someone who had a real respect for the actual history depicted, knowing full well that some liberties could be taken on the historical side for artistic purposes,” says OHA Executive Director Gregg Tripoli. “But, most importantly, we wanted a great writer, someone who loved language and would do credit to the historical significance and the current relevance, with beautiful words, and make the story come alive.”

The production tells the story of Harriet Powell — a young, multiracial, enslaved woman who, during her escape from bondage in 1839, ultimately found shelter in the home of abolitionist Gerrit Smith. It was in that home that Powell met Smith’s cousin, Elizabeth Cady (who would later make a name for herself as the women’s equality advocate Elizabeth Cady Stanton). The play dramatizes their meeting, and Powell’s influence on Stanton, in the hours before Powell fled to freedom in Canada.

“Bringing these stories to the stage opens our history to a whole new audience, in a whole new way. We at OHA are grateful for our long relationship with Kyle, and for the collateral benefits to our sister art and cultural organizations as a result,” said Tripoli.

Bass’ new plays are salt/city/blues, which will have its world premiere at Syracuse Stage next month; Citizen James, or The Young Man Without A Country, a one-man show on James Baldwin, commissioned by Syracuse Stage, which streamed in 2021 and will tour live in 2022; and the libretto for Libba Cotten: Here This Day, a new opera based on the life of American folk music legend Libba Cotten, commissioned by the Society for New Music. Bass’ other full-length plays include Tender Rain, Bleecker Street, and Baldwin vs. Buckley: The Faith of Our Fathers.