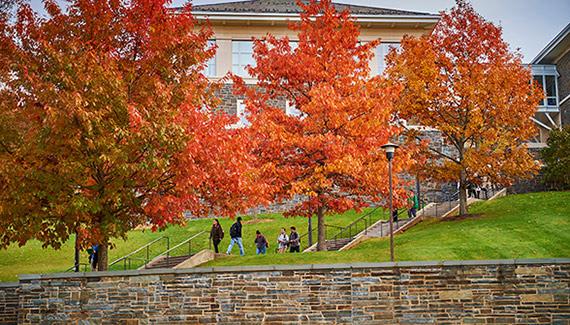 Colgate students and faculty played the role of Supreme Court Justices, sans robes, during a debate on the legacy of one of the most controversial cases heard by America’s highest court in recent years.

In a semi-formal debate format, Louisiana State University Political Science Professor James Stoner and American Civil Liberties Union Legal Director David Cole, who argued the case in the Supreme Court, prodded at the tensions between non-discrimination laws and freedom of religion that arise from the case. Students and faculty members in the audience then prompted the debaters with hypotheticals and questions, gleaning nuance and exploring how future cases on this issue might fare before the court.

Political Science Professor Stanley Brubaker, acting as moderator, began the evening with an overview of the facts of the case. In 2012, Charlie Craig and David Mullins, a soon-to-be-married gay couple, visited Masterpiece Bakery in Lakewood, Colo., to commission a wedding cake. Jack Phillips, the bakery’s owner, refused the commission, saying his Christian faith prevented him from commissioning cakes for gay marriages. Craig and Mullins sued, and after the state civil rights board ruled in their favor, Phillips appealed the case to the Supreme Court.

Though the Court ruled in Phillips’ favor, the ruling was based in part on procedural failures by the Colorado Civil Rights Commission, which the Court said showed a hostility to appeals on grounds of religious freedom.

After introductions, opening statements, and points scored on either side, the debaters worked their way to salient points of the case: Is it discriminatory to act on a belief that gay marriage is wrong, and is such an act constitutionally protected under freedom of religion?

Cole, who argued for Craig and Mullins’ side before the Supreme Court, reprised that role Tuesday, arguing that the baker’s actions violated anti-discrimination laws, which apply to any businesses which act as “public accommodations.” Cole believes that the issue will be heard in a new case soon, and as long as similar procedural mistakes are avoided, it should be a simple win for those on his side.

Stoner suggested that the courts are not the correct avenue for this issue, and that he would like to see a legislative solution to the problem that balanced the Phillips’ freedom of conscience and the rights of Craig and Mullins to free and full use of the market. A possible solution he proposed would be to draw a distinction between normal retail services — which he said better fit the definition of public accommodations — and commissioned or contracted work.

Wil Stowers ’19, a political science and Russian and Eurasian studies double major, asked the panel how the interaction between the couple and the baker may have affected the case’s outcome — if, for example, the couple had told Phillips the specific design and message they wanted for the cake.

Cole said that would likely have strengthened Phillips’ case, as he could argue that he chose not to take the commission based on the content of the cake rather than the identity of the customers.

Provost and Dean of the Faculty Tracey Hucks said the event would be valuable for students learning to engage with differing ideas.

“The Constitution Day debate helped to model for Colgate students how to disagree in respectful ways; how to agree in ways that do not posit a concession of one’s complete argument; and how to engage divergent points of view with deliberate listening and careful argumentation,” Hucks said.